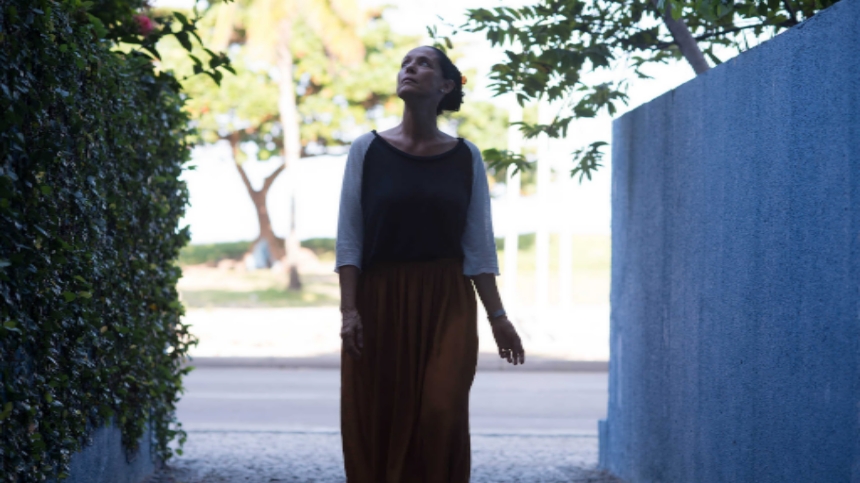 Just like Filho's Neighboring Sounds, Aquarius is a clear eyed observation of changing times in Brazil. It deals with the class differences, rapid gentrification, generation gap, among others. The film's aided by blistering central performance by the 70s sexpot Sonia Braga (Lady on the Bus, Kiss of the Spider Woman). Now 65, raven haired, tiny but extremely fit Braga commands the screen as Clara, a retired music critic, who is the family matriarch and moral compass of the film. Aquarius is a small condominium complex right on the beach where Clara lives in an affluent Recife neighborhood. The building's blue exterior has faded over the years, but it's well kept. But it's all but overshadowed by glitzy glass towers that surround it.

Clara remains the only resident (with her faithful elderly maid) of the building. She weathered her husband's death and all the children growing up and moving out. A Goliath real estate company's young, US educated project manager is trying to make an offer to buy out Clara, but she wouldn't budge. There are just too many memories associated with the place. Her furniture, her LP collections, everything inside that apartment has a backstory and meaning-- the film starts in 1980 in the same apartment where they are celebrating the birthday of Clara's mother. While people are congratulating her and having a good time, mom's eyes are fixed on a bureau in the middle of the room. She is reminiscing about great sex she had on the bureau long ago. And that bureau remains in Clara's apartment, imbued with the memories of people who are long gone.

Filho doesn't shy away from human sexuality. Even though Clara had a breast cancer and had a mastectomy on one of her breasts, she engages in a steamy sexual fling with a male escort whom her friends recommended. She accidentally walks in on her young nephew and his new girlfriend having sex in the morning. She quietly backs out smiling. She flirts with a young lifeguard friend. Sex and desire are portrayed in a very frank, healthy light.

It is clear that slowly but deliberately, the developers want to force Clara out. They start engaging in psychological warfare with her- one day it's loud music and thumping, the next its drug fueled orgy that's taking place in the upstairs apartment which is supposed to be empty. The general upkeep of the building becomes shoddy. It's also Clara's daughter Ana Paula (Neon Bull's Maeve Jinkings), a cash strapped single mom, who is approached by the company to put pressure on Clara to sell the apartment. But when confronted with accusations, the young project manager plays innocent, as if everything is one big misunderstanding, that it's Clara who is always being unreasonable.

Even though the film's perspective is from bourgeois class through and through, and Filho clearly sympathizes with the main character, he takes jabs at the rifts between haves and have-nots matter of factly. When Clara's family and friends are gathered and walking on the pristine beach, her friends points where the sewer feeds into the ocean: "This is where the rich part of the town ends and where the poor part of the town starts" she says without irony.

Dense and richly textured, Aquarius works as a strong anthropological study of changing society and proves the cultural center of Brazil is not in the south and Rio and Favelas anymore. Along with other filmmakers from the Northeast Pernambuco region, Filho shows sophisticated, nuanced yet still sensual side of Brazilian cinema. With Braga's commanding performance and the quite explosive ending, Aquarius goes down as one of the finest films of 2016.

Do you feel this content is inappropriate or infringes upon your rights? Click here to report it, or see our DMCA policy.
Kleber Mendonça FilhoSonia BragaMaeve JinkingsIrandhir SantosHumberto CarrãoDrama