Destroy All Monsters: LUKE CAGE, Democracy, and the Voices Outside the Majority 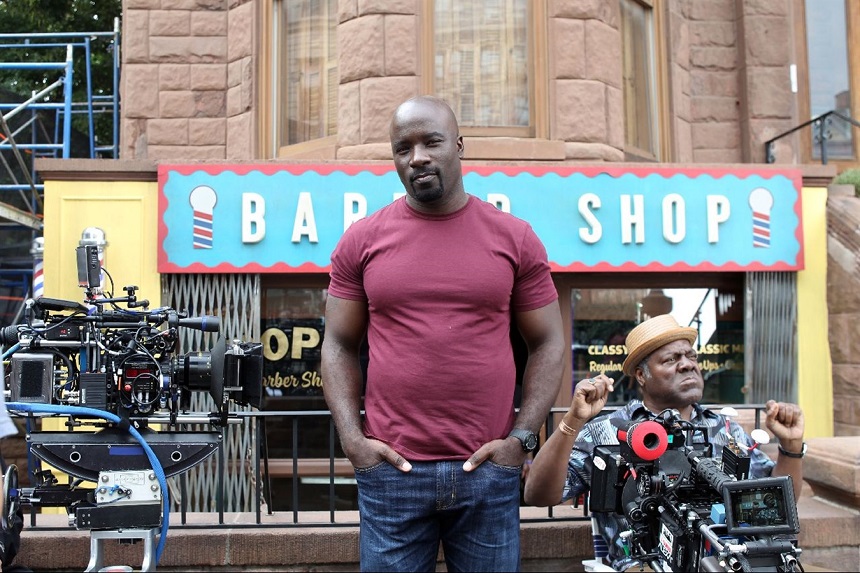 I'm not a political writer, though like many professionals and non-professionals on the pop culture beat this year, it's been difficult to hold back some political views.

Part of this is the inevitable nature of the thing: we have a man crusading for the Oval Office who is, far more than he could ever be termed a "politician," an out-and-out pop cultural phenomenon. Pop culture obeys certain rules, and I spend a lot of my time analyzing and discussing those rules, in this forum and many others. It's hard to ignore the biggest show in town, whether it's Star Wars, the MCU, or Donald Trump.

I say "we" in the first sentence above deliberately. I'm Canadian, and I can say with absolute transparency that what I wish more than anything else is that all the people whose lives will be affected by the outcome of the American presidential election were empowered to vote in it. As Ava DuVernay's outstanding recent documentary 13th made clear, this enfranchisement to vote doesn't even include a vast swath of citizens of the United States; it certainly doesn't involve Canadians, Brits, Germans, Chinese, or anyone else who has to share a planet with the nation most capable of healing or obliterating it.

I also use the word "crusading" deliberately. Look up the Crusades sometime. In Western, Christian societies we've sanitized that word of its moral implications, but make no mistake: Crusade is to Christianity what Jihad is to Islam. Even with the "revelations" of the past days (anyone who found them "revealing," though, was not paying attention to the past five years), Donald Trump's Jihad is dangerously close to public implementation.

Naturally, this has all had me thinking about the nature of the democratic experiment in the United States (and elsewhere, including my own country). And to drag things back to my usual beat here, I gotta tell you: it's a lot like Hollywood.

This shouldn't be surprising. Hollywood is a capitalist industry, and democracy and capitalism are tightly intertwined, enabling one another in a symbiotic circle that goes back half a millennium. And they're both about the numbers.

I've largely been thinking about this, not because of Donald Trump, but because of Luke Cage and Danny Rand. They are the lead characters of the current and forthcoming Marvel Netflix series, the eponymous Luke Cage and next spring's Iron Fist.

Luke Cage, released two weeks ago, has received (for the most part) fulsome praise from the critical community. It is a progressive show. As many writers (and creatives involved with the show itself) have noted, in 2016, with Black men dying daily by the bullets of America's police (and "stand your ground" lunatics), a Black male superhero with unbreakable skin - foregoing the spandex super-suit or Iron Man armour for a Trayvon Martin hoodie, no less - is a massive, iconic cultural milestone. Luke has existed in the comics for almost half a century, yet like the best mythic creations, is only growing in relevance.

Yes, Luke Cage is a progressive show (as an idea anyway - many writers and commentators have begun the work of identifying how the genuine article, the series itself, both supports and betrays its own mission statement). It's had me wondering, though, about scheduling: why will Luke Cage be followed into the world by what may well turn out to be Marvel's two most regressive products, a film and a television series that look like they will exploit Orientalism in its fullest flower, Doctor Strange and Iron Fist?

I haven't seen either property, obviously, so I won't think-piece them to death prematurely. The answer is the same in all three cases, regardless, and it's the democratic one: ultimately, the audience that would praise (or condemn) Luke Cage, or condemn (or praise?) Iron Fist, is a nice, small slice of the overall market's pie - and the studio doesn't need to care.

In some ways, this generates innovation and growth. Luke Cage can lean on identity politics in a way that Iron Man can't, because as generous as the Netflix audience is, the worst thing that can happen is they give up after episode 2, or come away from the whole series feeling like maybe it wasn't for them. Their money is already in the bank, and they'll find something else to watch next week. Few customers can be expected to cancel their Netflix subscription outright if they don't like Luke Cage.

So, we get genuine TV watermarks like Luke's "nigga" speech, or the slow build of time spent in Pop's barbershop instead of watching him fight, or the brilliant internecine struggle between Cottonmouth (Mahershala Ali) and Mariah Dillard (Alfre Woodard) as they try to consolidate power in Harlem. We get the series' phenomenal soundtrack (both the score, by Adrian Younge and Ali Shaheed Muhammad, and the highlighted songs, some performed live and at length at Harlem's Paradise - paradise indeed!). We get a detailed sense of the community that Luke lives in, given a voice that doesn't need to surrender itself to mainstream interests; it can afford specificity, even while superheroing it up in the most mainstream genre in the world right now.

And who knows, maybe Iron Fist will be brilliant, and tackle Danny Rand's "white saviour" stance head-on, as the racist, outdated story structure it is. Maybe Tilda Swinton really is the Ancient One, and her Doctor Strange casting is destiny. (Would you be surprised?)

In both cases, wins or losses will be discussed at length, but the only real danger is long-term damage to the brand - and at this point, the Marvel brand is bolstered so spectacularly within mainstream audience "voting" interests (read: ticket buying) that it would take an unimaginable meltdown to even bring it under question. Most of the people who watch any of the Defenders series on Netflix, or The Defenders itself, will be the same folks who forked over $400 million at the box office this summer to see Captain America: Civil War, and sold out Black Panther and Spider-Man kiddie costumes at the Disney store the next day.

They're not going home arguing the merits of Luke Cage's speech outside Crispus Attucks, or even if they are, they're still gonna dial up Iron Fist in March. They're bought in, and nothing about race relations in any of these projects is going to dull the interest of any but a minor percentage of them.

What would an "unimaginable meltdown" look like for the MCU? No idea (hence: unimaginable), but it would have to affect an audience base (or voting base, if you will) large enough to matter. It's hard to conjure what they could possibly do that would piss off or alienate that many of their otherwise perfectly content ticket-buyers. Numbers like that only come from, say, alienating an entire gender.

That's why Donald Trump's latest offensive behaviour has proved the tipping point for some of his support. As depressing as it is to contemplate, very few Republican politicians or voters gave a shit when Trump was messing around with minorities. They're called that for a reason: they represent a minority share in the populace, and therefore, the voting block.

(And if you want to learn more about how American politics have further diminished that voting block, again, I highly recommend watching 13th - also on Netflix.)

Weirdly, and perhaps depressingly, the things we call a lot of our pop culture out on the carpet for - and the MCU is just an example of this - are the sorts of things that play just fine to the selfsame "base" of American political interests which are sometimes, and certainly this year, frustratingly regressive in their social views. It's simple and it's safe, because it's just a numbers game: and on the movies or TV, and at the voting stations next month, the majority remains safe.

Do you feel this content is inappropriate or infringes upon your rights? Click here to report it, or see our DMCA policy.
Destroy All MonstersDoctor StrangeIron FistLuke CageMarvel