Destroy All Monsters: It's Not About You, DOCTOR STRANGE 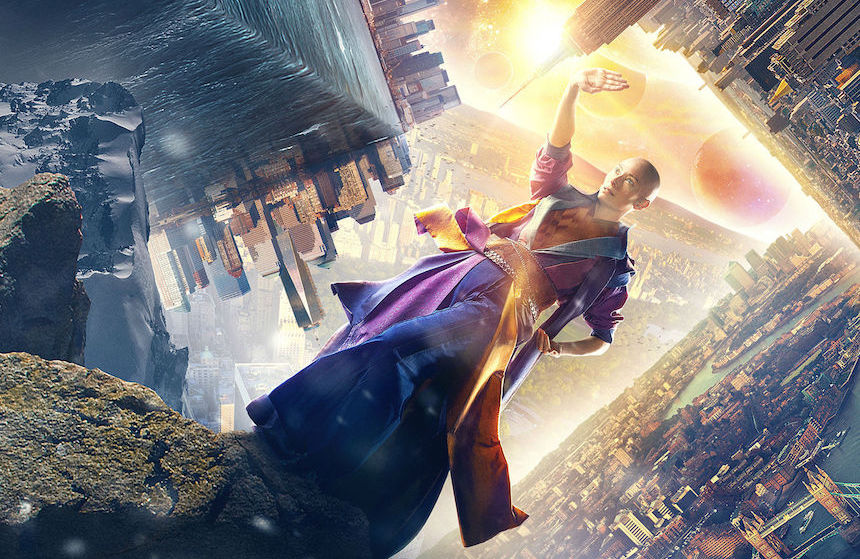 One of the running jokes in Doctor Strange has Stephen Strange (Benedict Cumberbatch) constantly having to reassert his title to anyone and everyone, because after the accident that shatters his hands sends him scouring the world for a cure, no one will call him "Doctor." This is a useful line of insight the character, and into what the film does with it - which, Stark-ish goatee notwithstanding, sets Doctor Strange somewhat apart from the usual Marvel origin story.

(You can read Ard's full review of Doctor Strange for Screen Anarchy here.)

None of this insight into Strange's identity absorption lets the film grapple with the political problems of its white saviour narrative, except (perhaps) accidentally. Stephen Strange is still a white guy (a rich, penthouse-dwelling white guy from New York, no less - who does that remind us of this week?) who finds salvation in an eastern culture, itself a transplant (Nepal for Tibet, to appease the Chinese government). His learning is by way of the film's other, more notorious transplant, The Ancient One (Celtic for Chinese, same overt reason - but with a lot of covert ones besides).

Stephen Strange is another of Marvel's many (many, many) white male dicks at the start of his adventure. Per the film's luxurious casting, he's a bit more Sherlock (super-intelligent and hyper-verbal) than even Robert Downey Jr.'s Iron Man, but they're cut from most of the same cloth, with the rest of the outfit made up from equal parts Star-Lord (smug louche!) and Thor (entitled ruling-class prick!).

As is tradition, there is immediately a fall from grace (or in this case, cliff) which sets Strange on the road to being not such a shmuck all the time. Unusually in the Marvel canon, though, when Strange meets his guru (Tilda Swinton in this case), she intuits immediately that most of his personality problems - and by extension, his cruelly obsessive drive to regain that which makes him special/better than everyone else, his surgical hands - comes from a place of painful insecurity.

Strange vows that the universe is just an uncaring void, signifying nothing; the Ancient One notes that this shows how little he thinks of himself, a meaningless fragment of a meaningless cosmos. Strange director Scott Derrickson is a Christian and uses the film to weave layers of introspection of exactly what meaningful forces bind the Marvel Cinematic Universe together, but the Ancient One's observation works in the existentialist/atheistic sense as well: in a meaningless universe, importance can only come from within.

Self-importance is not one of the "development opportunities" for most white Americans traveling abroad, though, and Stephen Strange is not much of a slouch in that area. His persistent, even petulant correction of everyone who calls him "Mister" affirms it. Being Doctor Stephen Strange is so much a part of Strange's sense of himself that he views the removal of that acknowledgement as a personal insult. Shortly after the car accident, we see Strange practicing his handwriting. What is he working on? His own name, of course.

It's a quintessential 21st century crisis, this crisis of identity: this need for one's sense of self to be the first signifier above all, and for all others to reflect and acknowledge the primacy of that identity back at the bearer. It's no longer enough to vote for political candidates who could do the job (simple professional qualification smacks too much of "expertise," and expertise is alienating to all those who do not possess it); we have to find the one who looks and feels the most like us, who "represents" us, because voting, like everything else, has become an exercise of our own ego.

We pick teams. (Make mine Marvel.) We threaten or marginalize the other guys. ("I will not be reviewing the Ghostbusters reboot! But I will send death threats to actresses...")

We retreat deeper and deeper into a bias-confirming echo chamber of people who exactly agree with us, a hall of mirrors. Not for nothing does one of Doctor Strange's signature sequences take place in "the mirror dimension," a duplicate Earth where magicians can fight one another in geometrically-cascading buildings, without ever touching or harming the outside world. Of course they can't: everything in the mirror dimension is ultimately purposeless.

On a larger level, Doctor Strange is not just another Marvel film about a white male dick learning to stop being quite such a dick. More specifically, it's an origin story about a white male dick learning that what he thinks of himself doesn't actually matter to anyone but him, and probably shouldn't matter that much to him, either. "It's not about you!" is the final lesson the Ancient One teaches Dr. Strange, and the movie around them bears this out: Stephen's need to believe in himself, to heal his hands and be a doctor again (or even just be called "Doctor" by the people around him) is pretty fucking unimportant next to the unimaginably epic visions of the magical world and all the other dimensions that Derrickson and his team have conceived, visualized and rendered for us to see.

In Doctor Strange, identity itself is just another form of vanity, and there's more important shit going on. It's time for Stephen Strange to get over himself and get on with it.

This is nice, but it doesn't solve the core problem: the film has its cake and eats it too. Stephen Strange learns that he's not the most important thing in the universe... but does so while literally being the hero of his own (and this overall) story. Baron Mordo (former Transylvanian, now played by Chiwetel Ejiofor) doesn't. Wong (former houseboy, now librarian) doesn't. Even the Ancient One (former wise Asian guru, now androgynous British guru) doesn't.

It's a shame. Doctor Strange is a smart movie, made by smart people, and the skeleton of a good idea is there. The film might genuinely have a word or two to say about the silliness of elevating all these entitled white men to hero status, if it weren't so busy doing the same thing all over again.

Do you feel this content is inappropriate or infringes upon your rights? Click here to report it, or see our DMCA policy.
Benedict CumberbatchMarvelScott DerricksonTilda Swinton