Review: DEEPWATER HORIZON, Heroes At the Mouth of Hell 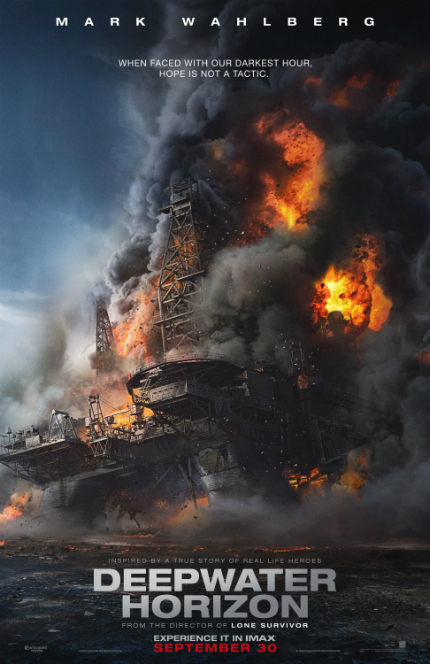 Six years ago, nightmare images of an oil rig burning at night in the Gulf Coast seared themselves into memory. The fire raged high and furious against a pitch-black landscape, leaving one to wonder just what had happened ... and who, if anyone, survived.

Now comes Peter Berg's Deepwater Horizon, a dramatization of events in the hours leading up to the explosion that claimed 11 lives. Its direct source is a magazine article by David Rohde and Stephanie Saul; the screenplay is credited to Matthew Michael Carnahan (Berg's The Kingdom, and also Lions for Lambs and others) and Matthew Sand.

In its early scenes, the movie feels very much like a staged reading of a magazine article, filled with a copious amount of information that needs to be dispensed in order to be (or at least to seem) authentic. In its favor, director Berg is quite experienced at ensuring that the pace never flags, even as many minutes are chewed up with exposition that is thickly technical.

For the layperson, however, an early scene tells us all we need to know about what will happen. It follows an intimate scene between engineer Mike Williams (Mark Wahlberg) and his wife (Kate Hudson), which establishes that Mike is very much in love with his wife. The next scene establishes that Mike loves his only daughter; he listens respectfully as she recites the report she is to give in school on what her dad does for a living. The facts of the little girl's report soon give way to a visual demonstration of an oil rig blowing its top.

The sudden, intentional, and altogether safe and controlled explosion at breakfast sets an ominous tone for what is to come, and from that point onward it's a waiting game as the chess pieces are placed into their starting positions and the detailed exposition begins. The movie quickly establishes the good guys (oil rig workers) and the bad guys (BPA employees). BPA owns the rig, known as Deepwater Horizon, and has contracted with another company to actually find the vein of oil and establish the connection that will pump out the oil, at which point BPA will take over the operation.

The oil rig workers all are employed by the sub-contracting company. They are a weathered lot, well experienced in what they do, and led by Kurt Russell. This particular rig has taken longer than anticipated to set the oil pumping, which displeases BPA, since they are pumping money into the project and not seeing any returns (yet). Russell has a host of safety concerns about the rig; as rattled off by Mike in a meeting with the BPA folks, the equipment is not just old, it's constantly breaking down and requiring repairs.

Russell and Wahlberg exude calm and concern for their crew. Isolated as they are, they have all developed a good working relationship and respect one another; it's very much like a military operation, which probably appealed to director Berg, who has made several movies about the military. Indeed, the crackerjack expertise of the crew is rarely in question. The only serious questions raised have to do with Andrea Fleytas (Gina Rodriguez), and those have, apparently, nothing to do with her being the only female member of the crew; her supervisor, however, is not terribly interested in the suggestions of concerns of a relatively new employee.

For their part, the BPA employees are portrayed as 'corporate' people, more concerned with profits than with people. John Malkovich is typical; he's not quite a sneering, moustache-twirling villain, but for the purposes of the movie, he comes close enough. And they are pushing Kurt Russell to accept minimal safety standards so they can get the oil (and their eventual profits) rolling.

Once the disaster strikes, Deepwater Horizon becomes an energized, contagiously tense experience. Berg stages the action expertly, so that the level of suspense skyrockets almost instantaneously, and remains there to the end of the movie. That's no easy task, and it's only possible because he cast the movie extremely well and the actors give authentically affecting performances, especially the ones portraying the oil rig crew, including Wahlberg, Russell, Rodriguez, and Dylan O'Brien.

Gripping as it becomes emotionally, the movie sometimes loses track of specific heroes sheerly from a geographic standpoint. The oil rig is a contained environment but because of the fires that erupt, it's difficult to follow where the workers are in relation to the exits and the most pressing dangers. The workers know all that; they know the rig like the back of their hand. Too often, though, viewers are left in the dark.

Beyond those concerns, Deepwater Horizon is often electrifying, especially once the crisis becomes life-threatening. Really, it's impossible to turn away from the people who are in danger, and knowing that eleven souls did not survive raises the stakes. That makes the movie an emotional, engaging experience.

The film opens in theaters throughout the U.S. on Friday, September 30.