Review: In BEAUTY AND THE BEAST, Looks Aren't Everything 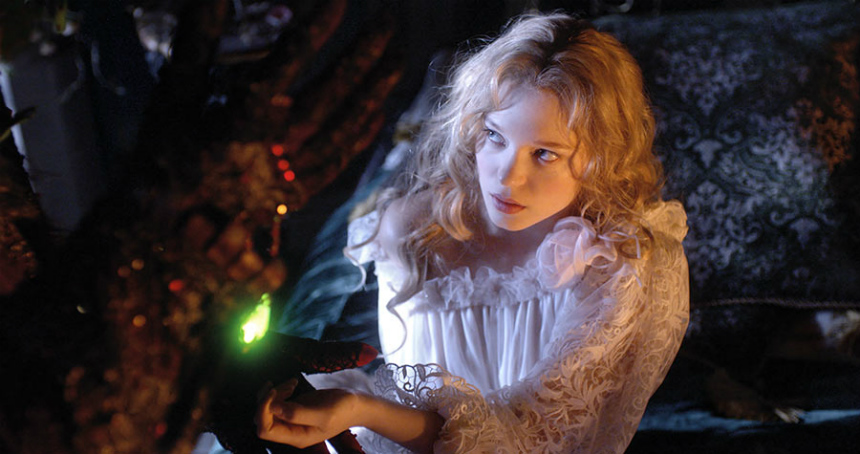 In the 21st century, how is one to present a fairy tale?

There are stories ripe with opportunity to create great visual, frequently with lots of action, but the stereotyping, themes, and gender representation can be a bit tricky in today's more liberated culture. A story such as Beauty and the Beast, with a heroine who reluctantly sacrifices herself to beast to save her family, only to fall in love with said beast, isn't necessarily a role model. Still, there is opportunity to adjust. Sadly, Christophe Gans and co-writer Sandra Vo-Ahn sacrifice story for visual spectacle.

The story is presented quite clearly as a fairy tale, beginning with a mother telling her two children the story (and we are reminded of their presence at regular intervals). A rich merchant (André Dussollier) and his six children are financially ruined and forced to move to a country farm; only the youngest, Belle (Lea Seydoux) enjoys their simpler life.

On his return to the farm one night, the Merchant encounters a castle, and while he is given some treasure, he decision to take a rose for Belle leaves him indebted to the castle's owner (Vincent Cassel). Belle returns to the Beast in her father's place; the castle has magical creatures and a healing pool, and in dreams, Belle learns of the Beast's tragic past. Meanwhile, her eldest brother Maxime (Nicholas Gob) is deeply in debt to Perducas (Eduardo Noriega), who attempts to steal the Beast's treasures.

As I said, the visual effects are stunning. While this kind of work was somewhat on display in Gans' Brotherhood of the Wolf, this story gives him the opportunity to create stunning set pieces, CGI effects, and work with bold colours and elaborate mise-en-scene. With a budget of over £30 million, Gans, production designer Thierry Flamand, cinematographer Christophe Beaucarne, art directors Virginie Hernvann and Wolfgang Metschan and the effects team go to town to create the magical world of the Beast's castle and grounds, with moving statues, fast-growing rose plants, long tables piled high with mouth-watering delicacies, and opulent jewels and gowns for Seydoux.

Beauty is key, even when Belle and her family are 'poor'. But this is a fairy tale of magic, after all, and the kind of magic that Gans wants to show is that which only employs beauty, even in moments and characters that are meant to be dark. Certainly, this film does not have the violence or horror of Gans' previous films; while it is not as precious as a Disney film, it is obviously meant to be seen by a wide audience.

Which brings me to the film's failings, mainly the wasted opportunity of updating and contextualizing the story for a contemporary audience. Maybe the story is as creative team wanted it. In order to stretch the story out to nearly two hours, of course some gaps had to be filled in in both the background of Belle's family and how the Beast met his fate.

But take the recent Frozen: instead of just choosing the repeat the original story of The Snow Queen, the creative team looked at how they could update it not only with more positive gender roles, but turning many of the themes of fairy tales and folktales on their heads. First off, the film takes far too long to get to the Beast (a full half hour), setting up the story of the family's descent into poverty with the sons lamenting the lack of gambling in their lives and the horribly vapid daughters the lack of opportunity to find a rich husband.

Once Belle arrives at the Beast's castle, their few dinners together afford little engagement, and therefore little understanding of how Belle could fall in love with him. But as the story is maintaining the status quo, Belle's existence centres around taking care of her family, and sacrificing herself for love. There is a parallel love story between Perducas and his psychic girlfriend Astrid (Myriam Charleins) which ends in tragedy for both of them, supposedly a lesson in lack of selfishness in love. But after a while, I (and I'm pretty sure much of the audience) stopped paying attention to the story and just enjoyed the sights.

The cast are all fine, performing admirably within the context and mode of the film, with Noriega as a particular highlight (I always enjoy the delight he takes in playing the bad guy). And as I said, perhaps this is the film that Gans wanted to make, a straight-up fairy tale, a audiovisual feast for a larger age-range of audience than his previous films allow. But perhaps my expectations were too high after Brotherhood of the Wolf, which played far more cleverly with fairy-tale and magic imagery.

Review originally published during the Berlinale in February 2014. The film will open in select theaters in the U.S. on Friday, September 23 via Shout Factory.

Do you feel this content is inappropriate or infringes upon your rights? Click here to report it, or see our DMCA policy.
christophe gansEduardo Noriegalea seydouxvincent cassell