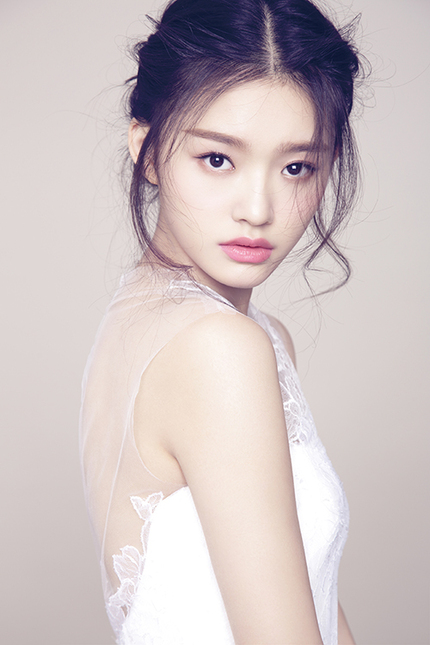 After beating out 120,000 other actresses for the part, newcomer Jelly Lin made her film debut as the title character in comedy legend Stephen Chow’s latest box-office record breaker, The Mermaid. In town to receive the New York Asian Film Festival’s Star Asia Rising Star award, the charming, lovely Lin chatted with me about her days on a Chow set, the pressures of instant fame and costarring with superstars Deng Chao and Show Luo.

The Lady Miz Diva:  How do you feel being in New York to receive the Star Asia Rising Star award?

Jelly Lin:  I feel very thankful.  I feel very honored.  I will work hard in the future to be better in my career.

LMD:  You have such a remarkable story, but first I’d like to know is what it’s like being on a Stephen Chow set?

LMD:  What was some of the best advice director Chow gave you about creating Shan, the mermaid?

JL:  So you know how I had to walk like a penguin in the movie?  Stephen Chow was the big penguin, while I was the little penguin, so he would walk in front of me.

LMD:  What other research did you do for the role?  Did you read the Hans Christian Andersen fairytale of THE LITTLE MERMAID?

JL:  Stephen Chow is a special director and he has his own thing going on.  He would ask me to do a lot of different things, like walking around and imitating Bruce Lee and dancing.  I didn’t know exactly what that was for when I was shooting it, however, after I watched the whole film after it was edited, then I could tell, ‘Oh, this is how he planned everything that’s in the picture.’

While we were shooting, he asked me to do different things and then I acted accordingly and we would try and shoot different things.  Director Chow had his own control and his own plan for what he was doing and I would just react fast on the spot.

LMD:  You mentioned Bruce Lee.  Everyone knows that Stephen Chow is a huge Bruce Lee fan and THE MERMAID opens with the theme from THE BIG BOSS.  Where did you feel the Bruce Lee connection was here?

JL:  Stephen Chow is the biggest fan of Bruce Lee ever, and he would connect everything he could to Bruce Lee.

LMD:  Did you watch Stephen Chow’s earlier films to help you prepare to make this movie?

JL:  You cannot really tell any real personal traits from his films.  He has all these different films and every single film is different.

LMD:   The cast for your film is amazing.  You have your first screen kiss with superstar Show Luo, your main lead is Deng Chao, a gigantic star in China, and you even have an appearance from Wu Yi Fan {Kris Wu}, who was a huge pop star in Korea and China.  Please talk about your experience with these established actors and what you learned from them?

JL:  They passed along a lot of acting experience to me.  They taught me a lot about how to act as a film actress.  They also helped me a lot with how to deal with the stress that I was facing as a first-time actress.  Also, I was really nervous because I didn’t have training beforehand and I got onto the set and started filming this huge film.  I was feeling nervous about the process.  So Deng Chao spent a lot of time telling me how to handle this.  So we were like brother and sister.

LMD:  So much of the fun of THE MERMAID comes from the crazy CGI effects.  Since everything is new to you as first time actress, what was it like to act against the green screen?  Tell us about the process of filming the visual effects.

JL:  There is a dynamic between the director and also the CG group.  Because of those dynamics, they sometimes have different ideas of what to do and what is better, and that means I have to take more takes.  It made my shooting more work, because I had to try different things, so that they can communicate with each other which is better.

LMD:  While THE MERMAID is hilarious, there is a serious message in the film about the environment.  What did you take away regarding the environment or the plight of the oceans that perhaps you didn’t know before you started making this film?

JL:  It’s not only about the environment alone, it’s about life.  Think about the fur products, like fur coats.  You have a lot of life on this earth that is not only human beings, and we are all a family, globally, every single type of existence.

LMD:  Is there anyone you look to and say, this is who I’d like to model myself after?

LMD:  So you want to pursue that type of comedy in future films?

JL:  I want to do everything - anything.

LMD:  What are some of your most heartfelt memories of making THE MERMAID and being on the set?

JL:  There was sequence in the movie where I ask Deng Chao’s character, Liu Xuan, “What would you do if you only had one minute to live on this earth?” He said, “I would just look at you.” I really love that scene because no matter if the guy was saying something real or not, Shan Shan was really innocent and she believed everything he said and then she found that true love does exist on this earth.

I felt like when Zhang Yuqi’s evil villainess character was chasing after me and trying to kill me, Deng Zhao‘s character said, “If anyone wants to do anything to her, you should do it to me first.”  I was really moved by that, as well.

LMD:  The story of your beating 120,000 other actresses for the role is amazing.  How did your friends and family react when you found out you were cast?

JL:  I didn’t tell them to begin with.  I was worried that I’d be replaced in the middle of the process, so I didn’t tell my family and friends.  After half a month of shooting, it was obvious to everyone that I was chosen, so I came clean to everyone.  They were surprised.  They didn’t believe me. {Laughs}

LMD:  The film is about to play here before a wide variety of people of all different cultures and backgrounds.  Are you interested in watching the movie with the New York audience?

JL:  Because there are a lot of different cultural backgrounds, as you said, and this film is very Chinese, per se; Stephen Chow is Chinese, so there is a very strong Chinese romantic comedy feeling to the film and I don’t know how the audience will react.  I would like to see more of their reactions after they see the film.

LMD:  What is next for you?

JL:  My upcoming project hasn’t really been decided yet, but I want to play a female villain.  I also want to play romantic stories on campus like a student {Laughs}.

Do you feel this content is inappropriate or infringes upon your rights? Click here to report it, or see our DMCA policy.
comedyinterviewjelly linNYAFF 2016stephen chowthe mermaid