Gamera Obscura: We're the Ones Who Need an Exorcist 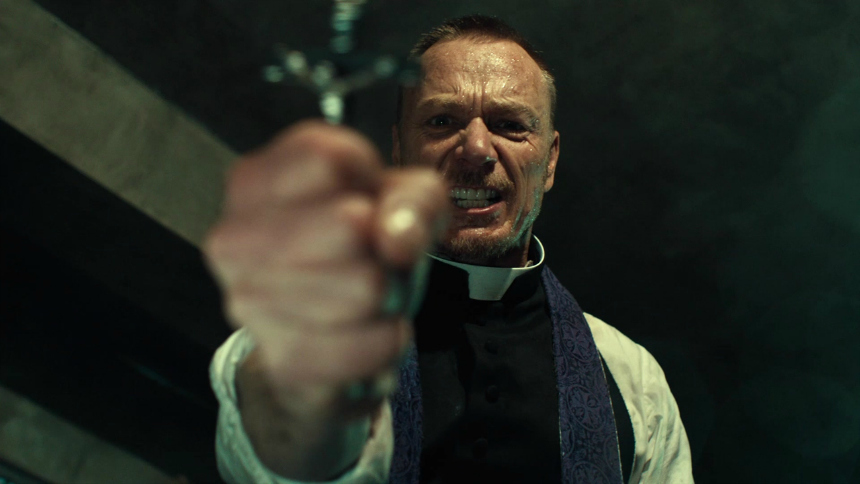 If you’re as big a fan of Friedkin’s The Exorcist as I am, you’ll know what I mean when I say it’s been touch and go out there in TV land. For every moment of the new Fox series that has stayed true to the original’s spirit, or at least updated it in a smart, knowing way, there’s another that makes you grit your teeth and remind yourself that you just have to ride it out.

There’s been no way of knowing whether such moves are necessary for expanding story elements to fit the medium... or for just pandering to the medium’s audiences. After last week’s Episode 5, however, it’s safe to say that the show has earned the benefit of the doubt. For the time being.

The challenge with any possession-and-exorcism story, though, is how to keep the scares fresh and the stakes high. In that sense, the formula established by Friedkin/Blatty is much harder to pull off than they made it seem back in the ‘70s. A female character, preferably young, starts to exhibit erratic behavior, is eventually confined, and then subjects the visiting clergy to a range of unsavory language and behavior.

And that’s it, really.

There’s no increasing body count, nor, usually, a more ominous agenda on the part of the offending demon. The central narrative isn’t about capturing the monster or killing it; in fact, the story action is premised on the possessed being immobile, on the evil being localized. The result is a horror subgenre that’s by far the most psychological—and all the distracting body-horror that occurs is merely in service of those psychological ends.

Which is why such films are the purest expressions of horror the genre is likely to produce. After all, existentially, and philosophically, what’s more terrifying than experiencing oneself or a loved one losing all control, with no limitations or taboos?

Moreover, if you think about it, the theme of possession runs throughout horror—even in films that we consider to belong to other subgenres. Sometimes the connection to exorcism, especially in its religious dimensions, is a tad more explicit, as in the bleak, admirable Ouija: Origin of Evil. Other popular films of the last few years—most notably The Conjuring, Insidious, and Sinister series—are predicated on some form of possession. Sometimes it’s a house, or multiple members of a family, that are possessed, and sometimes the ghostly muddies the demonic waters. But the central horror in all cases concerns a non-monster being used as a vessel, or vehicle, for the monstrous. In that sense, such films represent successful narrative expansions on the Friedkin/Blatty model, so much so that the essential commonality can go mostly unrecognized.

And of course the list goes on from there. The Paranormal Activity movies are superficially poltergeist flicks, but they’re actually not about ghosts but rather demon possession. In the Evil Dead movies the title “characters” take over the living, and you can see some of Friedkin’s 1973 film in Raimi’s 1982 one. And the greatest film of all about being possessed by an undying, murderous Evil? Probably Hitchcock’s Psycho. Just recall those last shots, that final interior monologue.

Yet the conventional, bedside, Roman Catholic-branded version of exorcism still has a powerful hold over audiences. The overdetermined symbolic setting itself is partly responsible, with the bed or bedroom’s associations to sex, to dreaming, to the concept of a “death bed.” And there’s a terrible intimacy about the whole affair as well. There’s family, and secrets, and shame, and humiliation right there every step of the way—and the dread, often on the part of the priests, that the demon will give voice to the repressed. After a successful exorcism, repression returns across the board, and this is literalized by the possessed experiencing amnesia about everything that transpired.

This is horror that hits home, and then some.

And as a final bit conjecture, I’d venture that audiences identify with the “innocent” who’s possessed for more reasons than we care to admit. Immobile in our theater seats or on our living room sofas, we, too, enter the realm of the now-unrepressed manifesting as madness and/or evil. We allow ourselves to experience these things as the spirit of any given movie or TV show takes us over. The violence, blasphemy, and transgressions that we sense latently in ourselves becomes external and real—and so, if the creative talent has done their job, we experience a catharsis.

Then we smile, exhale, leave our place of temporary captivity, and go about our everyday lives once again, full of sunshine. Halloween, culturally, allows us to do the same thing. For one night a year we trade in our sunshine-masks for our demon-masks, and in time we collectively pretend that only the latter was really a mask.

Gamera Obscura is a column about the ill effects of seeing too many movies over too many years. Peter Gutierrez also writes the Blockbuster Central column for Screen Education, contributes to Rue Morgue, and can be hunted down on Twitter @suddenlyquiet.