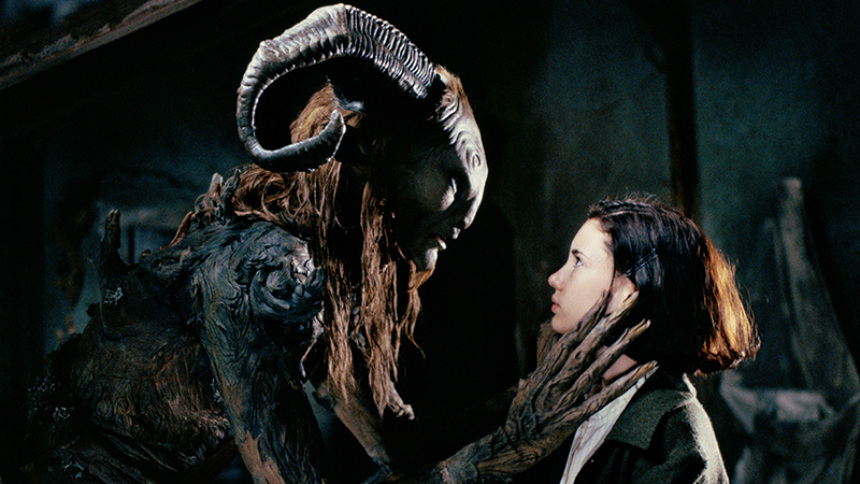 I suppose the tenth anniversary of the release of Pan’s Labyrinth would have done the trick all by itself. As with any such anniversary, you wonder where all the time went. And sometimes you wonder what exactly all those intervening years have yielded…

In the case of Guillermo del Toro that would mean the Hellboy sequel, Pacific Rim, and Crimson Peak, a mixed bag when compared to what came before. Despite my lifelong love of comics and feeling that he was a perfect fit for Hellboy, I was less crazy about those films than most everybody else. Pacific Rim—well, I liked it more in theory than in practice. And Crimson Peak, while a welcome return to some of the themes of del Toro’s early films, seemed to be concealing a more emotionally honest, even ruthless, film about “monstrous love” that managed to poke through the surface only now and then.

And, yes, I know del Toro has been writing and producing a wide range of work over the past decade. But I’m a movie guy primarily, and if one of my favorite directors doesn’t seem to be directing too many movies, and the ones he does direct I’m not in love with, well, I get petulant.

So I guess that’s why “Trilogía de Guillermo del Toro,” the new Criterion Collection release, has just made things worse. I’ve spent the last few days with it, and the wonder it's provoked has been kinda bittersweet. The Blu-ray comes with an interesting, if brief, new intro to the filmmaker by Neil Gaiman, a new essay by Michael Atkinson, plus a ton of extras related to del Toro’s production and design notes; I mention this because that’s the one area where he never ever disappointments as an artist—his third eye meets his physical eye, as well as his hands, and the results are offhandedly fantastic (in both senses of the word).

But again, those are just the extras. The items that help turn most Criterion products into a mini-museum on a beloved film or filmmaker. It's an enterprise that's honorable and worthwhile, and beautiful, too. It’s also, sometimes, a little sad, in that nostalgia is bound to enter the picture. That's because it often feels as if the artist in question, even if still active, has already retired… or worse.

Because that’s the thing: forget the extras, it’s the three films in the trilogy that will break your heart. The Devil’s Backbone alone would probably establish del Toro as a leading cinematic horror-fantasist, but when flanked by Cronos and Pan’s Labyrinth, it just gets silly.

Of course a home-video retrospective like this could, and probably should, be experienced as a celebration rather than a premature obituary. Which begs the question why I, and others like me, would view del Toro’s, or any filmmaker’s, output (or lack thereof) with petulance to begin with. At various points in my life I’ve felt this way about Stanley Kubrick, John Carpenter, and Kathryn Bigelow. Probably a dozen others as well.

I guess wanting more work, and more good work, from a creator is part of being a fan. Maybe it’s a natural enough feeling, and there’s nothing more to it. Maybe.

If I’m honest, though, I know there’s something else at work. Cinephiles in particular should be well aware of all the challenges of making a feature, and if they know their film history, they know that some directors can’t keep a certain level of quality in the pipeline because they’ve met with too little success or, interestingly, its complete opposite. Both can derail an artist. Still, despite understanding some of the realities of the business, I can sometimes feel as if I’m actually deprived of something that is my due. Again, that’s part of the psychology of fandom. What’s sad is how the dynamics mirror similar ones that aren’t so flattering.

There’s the “God Who Failed” syndrome. We pray to our “icons,” and if they don’t deliver, it’s as if our prayers haven’t been answered. A little bitterness gets mixed in with the adulation. There’s also the regressive feeling of being disappointed by those one looks up to—parents, teachers, older colleagues. In those cases that initial disappointment hides another feeling behind it: a kind of childishness at having “unrealistically” elevated a fellow human being to a level so far above us… and then the shame at being so childish.

Sometimes this glorification of the past is simply about laziness. Surely there are other young filmmakers out there who are impressing in the ways that del Toro was 15 or 20 years ago, and sites like ScreenAnarchy are a good place to discover them. So perhaps it’s just easier to mourn and complain than explore and grow...?

All I know is that I miss Guillermo del Toro. The guy who made deeply-felt films about the Spanish Civil War even though he was from Mexico. The guy who redefined what fantastic film in “world cinema” mode looked like. The guy who was an exciting, relentlessly original talent—not the icon he would eventually become.

Gamera Obscura is a column about the ill effects of seeing too many movies over too many years. Peter Gutierrez also writes the Blockbuster Central column for Screen Education, contributes to Rue Morgue, and can be hunted down on Twitter @suddenlyquiet.