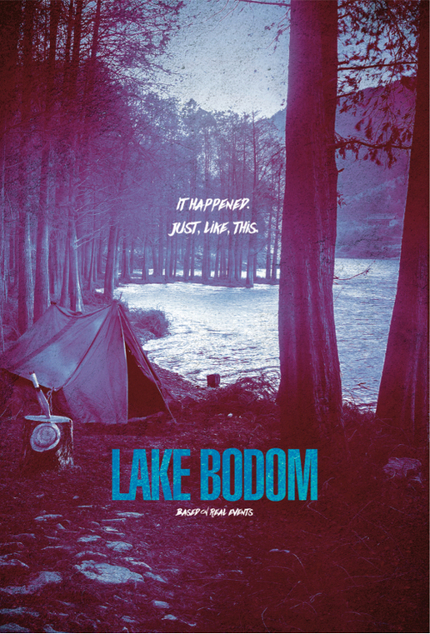 It was 56 years ago this weekend that the shores of Lake Bodom were home to one of the most notorious and shocking crimes in Finnish history. Four teens on a camping trip were stabbed to death in their sleep in a crime that has remained in the news and public consciousness, a crime for which nbody has ever been sentenced, and that real life crime - or, more accurately, the mythology that has grown up around it - is very much present in Taneli Mustonen's upcoming Lake Bodom.

Every camper’s worst nightmare came true at Lake Bodom in 1960 when four teenagers were stabbed to death while sleeping in their tent. As the years passed and the case grew cold, the unsolved mystery turned into an urban legend, a creepy campfire story passed from generation to generation. Now, a group of teenagers arrives at the same campsite, hoping to solve the murder by reconstructing it minute by minute. As night falls, turns out not all of them are there to play...
Tonight... it’s girls against boys. Let the killing games begin.

Lake Bodom represents a fairly major departure for director Mustonen, who is coming off of one of Finland's biggest ever box office hits with the 2015 comedy Reunion, but if the just released trailer is any indication at all he is more than up to the task. This is slick and compelling stuff with enough of an original take on the slasher oriented bones of the story to make everythng feel fresh again.

The producers have thankfully included English subtitles on the trailer to make it widely accessible to audiences everywhere so take a look below.