Review: DHEEPAN, Behind The Immigrant Experience, A Rich And Provocative Story 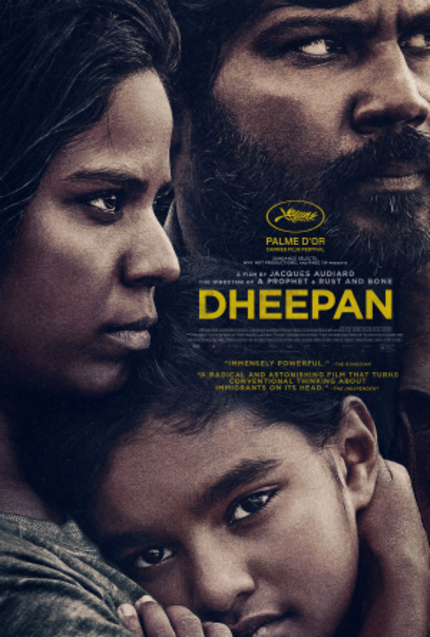 It begins with chaos: shouting voices calling out in alarm, a cacophony of sound, and a flourish of a camera moving through a thick crowd. It ends with similar sounds and a similar shot, one far less sinister and disconcerting. What happens between these moments is oft times breathtaking in this remarkable film by one of the most celebrated of French directors.

Jacques Audiard's career is now several decades old, but it was his 2009 Oscar nominated film Un prophete that caught considerable international attention. His next was Rust and Bone, a film that had some sublime moments but others that seemed both heavy-handed and gratuitous.

It is, then, all the more pleasing that Audiard's latest is a touchstone of precision and craft. With an exceptional cast that draws you immediately into their circumstance, this wonderful collision between a visceral genre film and a well drawn family drama is truly something to behold.

For me a film like this is even more a joy the less you know about it, but it is, I believe, safe to know that its one of the more powerful and illuminating stories about immigrant experiences, and how often times behind the new faces that enter their new community, there's a rich and remarkable story that proceeds their arrival.

In this case, we have an ersatz family unit that's on their way to becoming a real one, an extremely messy circumstance that on screen could easily descend into melodrama. Instead, Audiard's script, co-written with Thomas Bidegain and Noe Debre, manages to beautifully balance all these elements in both convincing and engaging ways.

Jesuthasan Antonythasan's role as the titular character is both ominous and emotionally raw, his capacity for both kindness and anger at even the most ardent of times completely believable. Kalieaswari Srinivasan does a similarly delicate dance in a truly difficult situation, while Claudine Vinasithamby literally bridges both the parents and the community in this vital, well realized role.

What's perhaps most shocking is to find out, at least according to regular movie database sources, these are all first time performances. There's so much confidence and passion displayed on screen that this trio could easily be thought to be giants of their local cinema. Mixing Tamil, English and French, the polyglot tale echoes from the circumstances in South Asia right through to the centers of French urban life.

As it plays out the film becomes more and more arch, yet never strays away from its central conceit. The eruptions of both violence and tenderness are supported by convincing side characters and interesting plot swings.

On the surface the film may play to some as a mishmash of tones, but it's this very masala that brings the various elements together that makes for such a rich and powerful film. The film is polemical without being didactic, and its message about human spirit and how connections of love can flourish in the most astonishing of ways is extremely moving.

The film even has echoes of the works of David Simon, portraying in its own way how the bureaucracy of various institutions - the army, the immigration service, the drug trade - all have their own intricately connected ways of making things difficult within the strata of those participating within the context of those circumstances. When actions do transpire their often attached with tremendous collateral damage, and it takes a unique character to successfully navigate these many minefields without getting lost along the way. The will to survive triumphs all, and moral ambivalence can, as shown in this film, lead to some remarkable moments of self-sacrifice and genuine connection.

It also plays with the forms of a Western, toying with archetypal heroic tropes while subverting them all the same. There are whiffs of the Coens here - No Country for Old Men comes to mind - yet Audiard's direction feels free from overt homage. Instead, we have a film of rare beauty and complexity, mashing the precision of an action film with the looseness of an unscripted family drama. When done badly such mashups are a mess, done with the sophistication and nuance embodied by this film they're a revelation.

While the ending might divide, the denouement will leave some audiences even more perplexed. WIthout giving anything away, I think it's best to recognize the ambivalence implied in whatever passes for catharsis, allowing for the possibility that not all is what it sees. Whether one reads the closing moments as allegory, dying dream or literal escape, the film provides (as most great works do) grounds for one to make up your own interpretation as an audience member without it ever appearing as unsatisfying or needlessly opaque.

A powerful film that has moments of sheer bravado, Dheepan proves Audiard to be a truly remarkable talent, having managed in this film to bring about some extraordinary performances while navigating the tension between the film's various genre elements. Provocative and profound, this is a film that through its many twists and turns manages to get things so very right indeed.

Review originally published during the Cannes Film Festival in May 2015. The film will open in select theaters in the U.S. on Friday, May 6.