Blu-ray Review: DHEEPAN is Given the Royal Treatment by Criterion 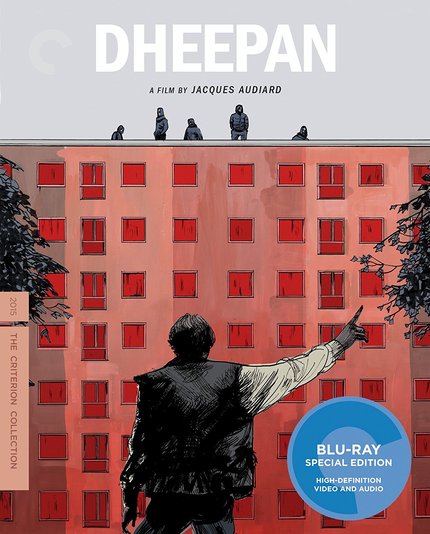 This week The Criterion Collection released Jacques Audiard's Palme d'Or winning drama, Dheepan, and it's a film everyone needs to see.

Dheepan, a Sri Lankan refugee and former Tamil Tiger, is on the run for his lafe after the Sinhalese government in his homeland attempts to wipe out the rebel forces following the end of the Sri Lankan civil war in 2009. In order to find a home away from the violence, he takes a Sri Lankan woman and orphan child and cobbles together a makeshift family for appearances sake. The trio end up in France, where they soon discover that even though they've left the battlefield at home, they've landed in a new warzone. The film tells the story of one immigrant family's experience as they attempt to escape the violence within and without.

I loved Dheepan, it's a different kind of outsider art. A film made by a Frenchman, starring a Sri Lankan Tamil, the vast majority of the film's dialogue is in Tamil, which Audiard doesn't speak, it manags to encapsulate the journey of the stranger in a strange land right down to its core. The feeling of alienation experienced by the character of Dheepan is as much a part of the film as it is built into the process. A truly fascinating experience.

Jason Gorber saw the film when it premiered in Cannes two years ago and was similarly overwhelmed:

For me a film like this is even more a joy the less you know about it, but it's I believe safe to know that its one of the more powerful and illuminating stories about immigrant experiences, and how often times behind the new faces that enter their new community there's a rich and remarkable story that proceeds their arrival.
In this case, we have an ersatz family unit that's in their own way to become a real one, an extremely messy circumstance that on screen could easily descend into melodrama. Instead, Audiard's script (co-written with Thomas Bidegain and Noé Debré) manages to beautifully balance all these elements in both convincing and engaging ways.
[...]
A powerful film that has moments of sheer bravado, Dheepan proves Audiard to be a truly remarkable talent, having managed in this film to bring about some extraordinary performances while navigating the tension between the film's various genre elements. Provocative and profound, this is a film that through its many twists and turns manages to get things so very right indeed.
It's rare that I agree so completely with Gorber, but he's right on in this case. The film is an emotional roller-coaster, and even though many of the twists and turns seem tuned up to the level of absurdity here and there, it feels like real life. Imagine echoes of La Haine, but without the intrinsic awareness of being a part of that community. This is the challenge that Dheepan and his "family" face day in and day out, and while they may not have felt like family going in, they share a bond as deep as blood coming out.
The Disc:
The Criterion Collection Blu-ray of Dheepan looks exceptional. There's really no reason that a modern film shouldn't these days. Dheepan was shot on digital, so there's no reason for any incosistencies to exist from source material to end product, and the result is glorious. Apart from the exeptional cinematography of the young Éponine Momenceau, there is also some fantastic work from the sound design team that the disc replicates wonderfully. The DTS-HD MA 5.1 surround track puts you in the middle of the action.
Criterion provides us with a small but effective group of extras that help contextualize the film and the experiences that led to its creation and ultimate success. There is an audio commentary with Audiard and co-writer Noé Debré that is full of scene specific anecdotes as well as deeper discussions of the film and its production. There are also a pair of interesting interviews with Audiard and the actor who plays Dheepan, Antonythasan Jesuthasan. Audiard explains in detail the road that led him to the film and his desire to make a film about the plight of these rebels fighting an invisible war. Jesuthasan, on teh other hand, talks in depth about his background as a child member of the Tamil Tiger rebel group and his own life as a refugee and how it led him to this project. The latter interview is one of the most interesting I've seen on a Criterion disc lately and it's worth your time and energy.
Dheepan is a wonderful film and Criterion's Blu-ray is a great way to not only experience it, but also to broaden your knowledge around the film, its influences, and its production. Highly recommended.