Destroy All Monsters: Hey Disney, We Need To Talk About The Shitty Experience Your Release Strategy Is Giving Your Customers 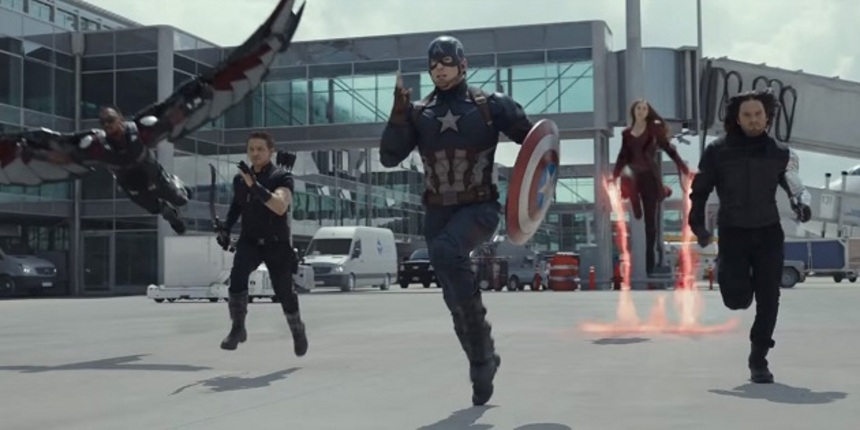 What I'll be describing today might genuinely deserve a spoiler warning, even though everything I'll mention is currently well within the public sphere, freely available for anyone who hasn't seen Captain America: Civil War to discover. That group includes me: I haven't seen the movie.

Certainly, the definition of "spoiler" is slippery here, too. I doubt - though I have no way of knowing - that Disney has blown the endgame for Captain America 3 in any of the ceaseless barrage of scenes, clips, trailers, licensed products, or other promotional items that have preceded the release of the film.

What they seem to have no problem blowing, though, is every single thing that will make watching the movie fun.

Isn't the movie being fun, for a movie called Captain America, and as the creators of Batman v. Superman very recently discovered to their detriment... kind of the point? Isn't that aspect - the movie's fun - the only marketable product that Disney is selling, i.e. the secret sauce; the finite, non-replenishable resource that they should be protecting at all costs?

I walked into a toy store the other day to buy some LEGO. One of the sets on the shelf was from Captain America: Civil War. It's the airport battle, or Wal Mart parking lot battle, or whatever that battle that's in all the trailers is.

Big and obvious on the box for that toy set: the, uh, "opposite" of a mini-figure of Ant-Man. It's a mini-fig that has been sized up to roughly the proportions of an air traffic control tower. In other words, Giant Man is in Captain America: Civil War.

I don't know, doesn't that sort of seem like the kind of "ooh, cool!" moment that ought to be experienced in the movie, instead of on the cover of an ancillary product that's been on the shelves for a month and a half?

Ditto the Spider-Man reveal. As expected, Marvel and Disney couldn't resist the seemingly infinite temptation to put Web-Head at the tail end of their final trailer for Civil War, because apparently they operate under the delusion that there was a living human being on the planet who had not heard that the Spider-Man character would be re-launched in this film - and was holding on to their dollars till they knew for sure.

Heaven forfend that these marketing geniuses let audiences experience the fun of discovering that character in the film itself; no no no. They've put him in the trailer, and even released whole scenes with him onto the internet - because again, let's not do anything so straightforward as actually allowing his appearance in Civil War to be part of the reason a person would actually go to a movie theatre and pay money to see the movie.

I'm grumpy about this because it's been next to impossible for me to retain any of my own sense of fun about this movie over the last month (even more so because of the actually indefensible decision to release a movie called Captain America overseas three weeks prior to letting it loose in, you know, America).

But I think the issue at play here points to a larger question of self-cannibalization that is at the heart of the ever-growing question of whether theatrical moviegoing will, can, and even should, survive.

When a service like Screening Room rears its head, every distribution chain in the country (plus a whole bevvy of online cinephiles) jump up and down to freak out about how complete and unfathomable a contravention of their most basic interests it represents. Ditto every iteration of the argument around online piracy; ditto AMC's hysterical toe-testing in the world of texting-permissible movie theatres a couple of weeks ago. In all cases, the result is the same: we scream, we cry, we make a big deal out of how sacrosanct going to a movie theatre and paying money to see a movie is supposed to be.

At some point, though, do any of these irate groups of interests connect their fury back to what should be filmmaking's sovereign waters: the ability to experience a movie as a completed whole, and as more than just a series of previously-released marketing bullets? By which I mean, as an actual, cohesive story, that you have to actually go to a movie theatre with a group of people to see?

If that idea, at least, can't be preserved, why do we give a fuck about whether or not there's day-and-date streaming on all of the big releases, or whether the guy in front of you is Snapchatting every third shot of Transformers 5 for reasons unknown?

I don't think the studios care about this. (I wonder if they would, if the Divestiture Decree had never gone through.) It's all just content to them, so breaking every movie into its component atoms doesn't really have anything to do with their bottom line, any more than platforming it out to VOD, blu-ray, and so forth.

The movie theatres should care a lot more about it than they do - they're still having trouble with recognizing that they're a brick-and-mortar retail outfit in a decade when such things are dropping like mayflies - but they've all but castrated themselves in the argument, because of how generally terrible the large chains are at providing a decent customer experience.

Which, oddly enough, leaves us: the film geeks - who write, tweet, blog, podcast, and generally create the pipeline by which the Anticipation Industrial Complex (née Comic Con) shits all this spoiler-ish dilution of the very pop culture we claim to crave, right down our wide and gaping throats.

ScreenAnarchy is, I hope, somewhat aside from the worst offenders in the clickbait era, in that we don't actually make our bread and butter by publishing every single new Captain America clip as they drool into the public sphere for six weeks, plus our own #HotTake on that selfsame clip.

But the effect around us is cumulative, nonetheless. Many of these sites have simply become unpaid interns for nine mega-corporations' marketing departments, while our social media fees do the rest, viralizing the content and platforming it out - again, for free.

So that we can pay. The studios. To show us the actual movie.

Guys, did we miss a memo here?