THE NEON DEMON First Trailer: Are You Kidding Me? 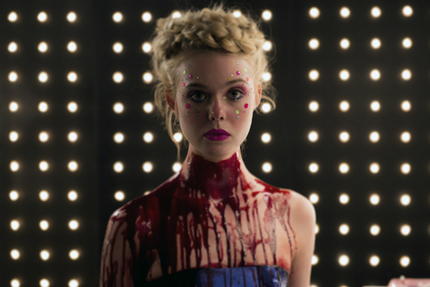 The first trailer for Nicolas Winding Refn's The Neon Demon looks freaking amazing. (Full disclosure: This is a personal reaction based on less than two minutes of artfully arranged footage, tied together with haunting music.)

Just announced for the Cannes Film Festival next month, the film stars Elle Fanning as a young woman who moves to Los Angeles and enters the modeling industry, as illustrated by a room full of beautiful, slender young women parading around in lingerie. (Why don't new models in movies start by doing fully-clothed advertisements for big-box retailers?) Happily, the fresh new model has dangerous secrets that lead to a bloody new style of fashions.

The trailer hooked me from the first frame. Watch it below. What say you?