If beauty is fleeting, is there anything more precious than protecting it while it lasts? If all you have going for yourself is the outer shell, to what lengths would you go to in order to keep your specialness? Does the desire to be desired trump one's moral center to the point that the other must quite literally be consumed as both threat and nourishment of one’s own worth?

Heady stuff, this, but not surprising that Nicolas Winding Refn finds moral ambivalence within the world of modelling. Yet The Neon Demon is more than just a pretty thing to be admired (though it is that). Nor is it simply a darkly brooding meditation on youth, love and death mired within a new Gothicism eschewing stone and shadow for pastel lighting and glistening, austere interiors (it’s that as well). Because it’s Refn it is also bleakly comedic, providing a surrealism without the cost of undermining the serious, almost portentous plotting and moody performances.

The story revolves around Jesse (Elle Fanning), and in the opening shot she’s covered in blood, set on a setee, playing dead for the camera. She’s the new kid in town, causing quite the stir with her natural looks and genuine youth. After meeting with an agency head played by a stunningly beautiful Christina Hendrix, she enters formally the world of professional fashion. Surrounded by giraffe-like colleagues who snicker at status while coveting the ineffable spirit and uniqueness that she possesses, we’re set up for a kind of animalistic engagement between these various models.

As many of Refn’s films feel, there’s loads of 1980s filtering at work here, as if some MTV video (perhaps by Robert Palmer?) has been mated with some David Bowie-starring horror movie. The straight-to-video feel mixed with world-class imagery makes for a delightful collision between high-and-low that’s often the hallmark of Refn’s cinema. There's also the spirit of Cronenberg, echoing (perhaps subconsciously some two decades after I saw it here in Cannes) the likes of Crash. Like The Neon Demon, that was another screening I attended that got booed. That was another group that clearly got it wrong. 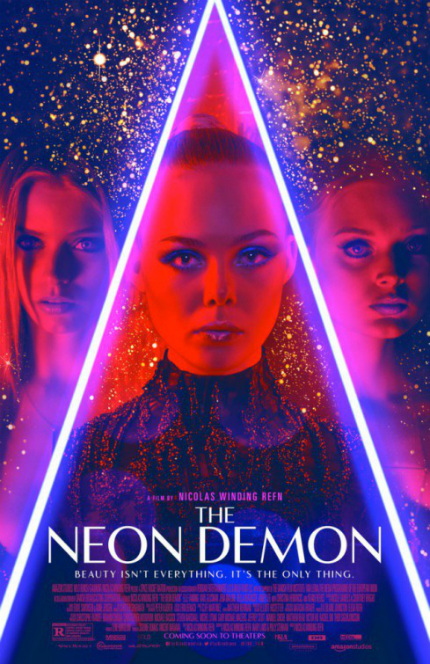 Fanning is strong, but it’s characters such as Ruby, played by Jena Malone, that gives the work much of its literal bite. There’s a crazed, manic phase to the film that’s intoxicating, set within a schizoid, seizure-like syncopation driven by thumping dance music as plastic and contrived as the models being portrayed. I also loved the way that a photographer (Desmond Harrington) provides a creepy, seductive gaze, lowering the eyes like the droogs in Clockwork Orange to give an even more palpable sense of dread.

For some the storyline will feel too subtle, for others the horror less shocking or outré than they may wish for. Yet as a mood piece the film works as well as any of Refn’s earlier work, capturing some of the angst of Valhalla Rising, the viciousness of Drive and the poetry of Only God Forgives. It’s fair to say it lacks the kinetic energy of his earliest works, but it’s clear that Refn and his collaborators are looking far more to the symphonic rather than the punk for their aesthetic.

Cinematographer Natasha Braier lights the film to perfection, crafting a demonic neon fever dream within the shooting spaces, and sordid, sweaty spaces within the motel rooms. It’s an L.A. film through and through, mixing glossy with ghastly in equal measure. Each frame feels painterly yet never removed from the furtherance of the mood and story line.

The Neon Demon may not be to everyone’s taste, but I’d posit that that may well be its calling card for some. What is clear is that it’s another fascinating contribution from this iconoclastic filmmaker, a work that may well fall between audience expectations, too weird for the art crowd, not gory enough for the horror nerds. For those of us that just want a film, regardless of genre tropes, to speak to us on levels both visceral and cerebral, all while tackling big ideas mixed with raunchy titillation, the work just may get under your skin. Silly, sly, sexy and sordid, The Neon Demon is a dark little burst of joy.

Review originally published during the Cannes Film Festival in May 2016. The film opens in theaters on Friday, June 24, via Broad Green Pictures and Amazon Studios.