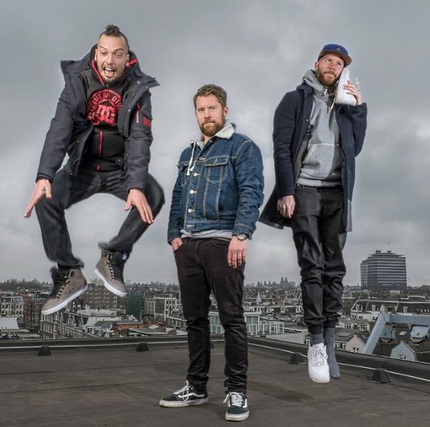 Earlier today, Dutch directors Steffen Haars and Flip van der Kuil announced they are currently working on two new films, one of which they will start shooting this May already: Rob Goossens: Low-budget Stuntman.

Steffen and Flip became international stars through their two films New Kids: Turbo and New Kids: Nitro, which they wrote, directed, and edited (and starred in, in supporting roles), and they followed this with the slightly more plot-driven comedy Bro's Before Ho's.

Not much is known yet about Rob Goossens: Low-budget Stuntman, but in the many radio interviews the two did all day, some snippets could be discerned.

The story is about an alcoholic stuntman, who has to bed the most famous actress in the Netherlands to save his marriage. Said stuntman, Rob Goossens, will be played by Tim Haars, Steffen's younger brother who also was one of the leads in each of the previous three films. Steffen, Flip and Tim have been preparing the script for the past two and a half years. According to Steffen, the main drive was that the combination of "alcoholic" and "stuntman" would provide them with the perfect excuse to them to break all sorts of stuff.

That sounds exactly what we know and love them for (well, that and harsh language), so to say we're looking forward to this is an understatement.

Rob Goossens: Low-budget Stuntman is slated for an early 2017 release. To be continued...


(In the picture above, from left to right you see Flip, Tim and Steffen.)

Do you feel this content is inappropriate or infringes upon your rights? Click here to report it, or see our DMCA policy.
Steffen HaarsFlip Van der KuilHuub SmitTim HaarsWesley van GaalenActionComedy