Final Trailer For BRO'S BEFORE HO'S Is Rude. Rude I Say! 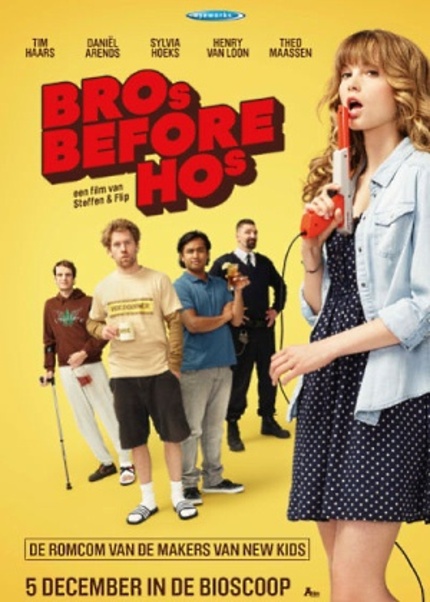 Steffen Haars and Flip van der Kuil are probably best known as the directors of New Kids Turbo and New Kids Nitro, as well as being two of the actual New Kids themselves. But that was then: the New Kids have hung their mullets in the willows, and this is now.

And this December, we get a new film from Steffen and Flip, outside of the chaotic universe of the New Kids: Bro's Before Ho's.

We've already published some stills and a teaser in the past, but today Eyeworks published the final trailer, and here it is. Steffen and Flip have proven in the past that their talents are not so much in the originality of their jokes, but in their expertise in comedic timing and when to push which boundary. So yes, it will be rude, but chances are it will also be truly funny.

In Bro's Before Ho's, two brothers swear to each other they'll never fall in love with a girl. Both manage to keep their vow, until one brother falls in love with the woman who is about to be taken-then-ditched by the other brother. Tim Haars (Steffen's real brother and also a New Kids alumnus) and stand-up comedian Daniel Arends star as the brothers.

No English subs are available yet but rest assured this isn't exactly the most highbrow stuff you'll see. Still, here are some pointers: at the beginning of the trailer, a father (played by the excellent Ton Kas of Matterhorn fame) urges his young sons to never start a serious relationship, because "All women are fucking bitches!"

Do you feel this content is inappropriate or infringes upon your rights? Click here to report it, or see our DMCA policy.
Bros Before HosNew KidsSteffen Haars