Hot Docs 2016 Review: TICKLED, A Tale From Which It Is Difficult To Squirm Away 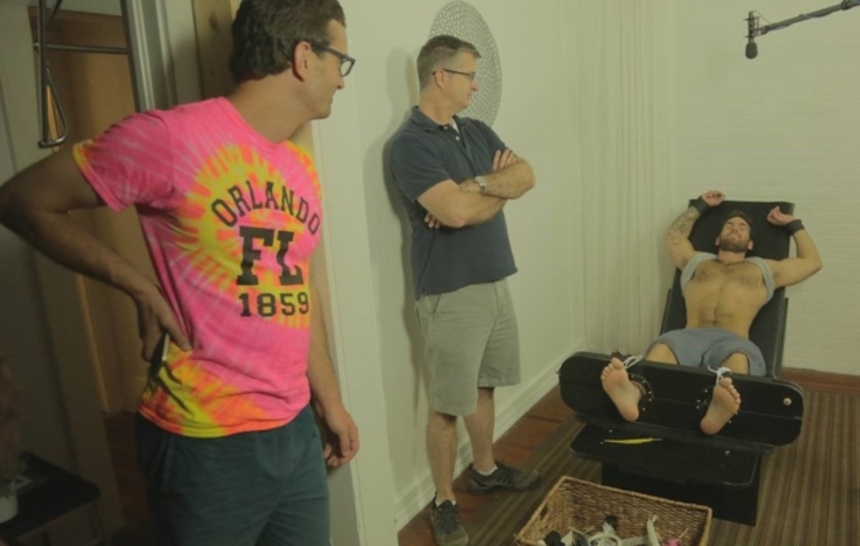 Tickled is a documentary about power when one is the 'tickler'. Tickled is a documentary about the sudden whiplash from silly to terror when one is the 'ticklee'. Tickled is David Farrier's investigative reporting magnum opus, a deeply engaging ride-along that is darn near impossible to properly review without spoilers. In fact that last sentence, and the two preceding it are probably spoilers to those sensitive about such things.

If you wish to go into Tickled as clean as possible, read on at your own risk. I will attempt to tread lightly.

New Zealand TV Reporter David Farrier makes it his job to look for weird stories to put on the tube as amusing and fun looks at the weirder part of his country. A toad gulping survivalist, a lady who owns more donkeys that one should.

So when he came across a website promising a lavish paycheque and an all expense paid weekend vacation to Los Angeles to participate in a 'Competitive Endurance Tickling' event, one could say his interest was most definitely piqued. When he encounters a hostile firewall in response to a few harmless journalistic enquiries, his interest is enough to take it from a possible news segment to a full out documentary film.  He and his co-director, Dylan Reeve (the Q to Farrier's intrepid 007) travel across the world to get to the bottom of tickling fetish videos and the mysterious, deep-pockets wealth that is financing what is apparently a global operation.

Not since crazy Danish filmmaker Mads Brügger infiltrated North Korea under the guise of a comedy sketch act, and later set up a blood diamond smuggling operation in Central African Republic by way of grey market diplomatic credentials has investigative documentary filmmaking felt so quirky and dangerous at the same time. Farrier has a more sensible, modest, personality with an almost romantic penchant for standing up to bullies.

As lawsuits mount into his journalistic digging, and even his own producer threatens to pull the plug, he doubles down in his brash competence. In a film for which the visual style is more practical than flourish, there is a meticulous shot pairing of a dog barking, breath showing against the cold New York winter air at a squirrel paralyzed on a tree trunk. this is intercut with a hawk snatching the squirrel in its talons and flying away. Was it the same squirrel? Does it matter?

Meanwhile, on the soundtrack, Primer and Upstream Color brainy-rabbit-hole-auteur Shane Carruth provides half a dozen creepy electronic tracks, these are carefully calibrated with the films official pair of composers whose upbeat, playful xylophone taps offer an aloof counterpoint.

Circling back to power, money, and information, all things at the end of the Tickled-rainbow, it is clear to me know journalism is far from dead in this new century; it has slyly metastasized into this kind of documentary filmmaking. If there is a moral to this story (and there are several), it might be, don't bully a kiwi with a video camera and some internet savvy. And if there is a corollary to that, it is be careful what documents you put online, because no matter how long the tail, the squirrel will always be eaten by the hawk.

Do you feel this content is inappropriate or infringes upon your rights? Click here to report it, or see our DMCA policy.
DocumentaryNew ZealandDavid FarrierDylan ReeveDavid StarrHal Karp