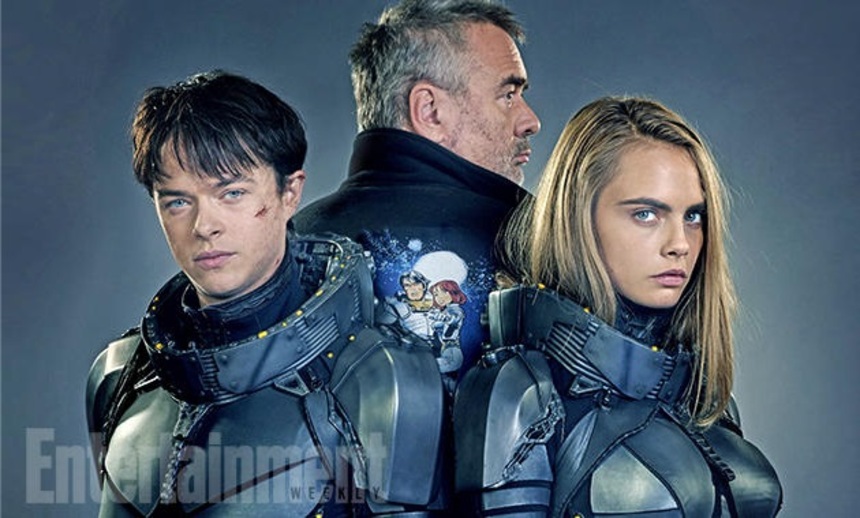 French director Luc Besson can be a right royal champion of secrecy at times, with for example his The Fifth Element appearing almost out of nowhere in 1997, despite it being a huge project. However, yesterday Entertainment Weekly published an interview with Besson about his upcoming adaptation of the Valerian graphic novels, and it was accompanied by several pictures, showing a glimpse of what is rumoured to be a gigantic production.

Its full title is Valerian and the City of a Thousand Planets, and to say I'm looking forward to it is an understatement. I've been a rabid fan of the graphic novels, having started to read them over forty years ago already, and their influence on popular fantasy-science fiction should not be underestimated. If done correctly, we ought to see world-building on a massive scale. Valerian (Dane DeHaan) and Laureline (Cara Delevingne) are special operatives for the government of the human territories charged with maintaining order throughout the universe. Valerian has more in mind than a professional relationship with his partner- blatantly chasing after her with propositions of romance. But his extensive history with women, and her traditional values, drive Laureline to continuously rebuff him.

Under directive from their Commander (Clive Owen), Valerian and Laureline embark on a mission to the breathtaking intergalactic city of Alpha, an ever-expanding metropolis comprised of thousands of different species from all four corners of the universe. Alpha's seventeen million inhabitants have converged over time- uniting their talents, technology and resources for the betterment of all. Unfortunately, not everyone on Alpha shares in these same objectives; in fact, unseen forces are at work, placing our race in great danger.

While that universe sounds very much like the one seen in the graphic novels by Jean-Claude Mézieres, the characters of Valerian and Laureline appear to have undergone some changes. Hm, we'll see, as I'm not so sure what to think about that. Judging by the interview and Besson's long-standing working relationship with Mézieres it would seem like the source material is in good hands. Surely The Fifth Element, almost twenty years old, is currently still the closest thing we have to a cinematic Valerian adventure...

Valerian and the City of a Thousand Planets is currently halfway through its principal shooting, and is slated for release on July 17th, 2017. More about The Fifth Element