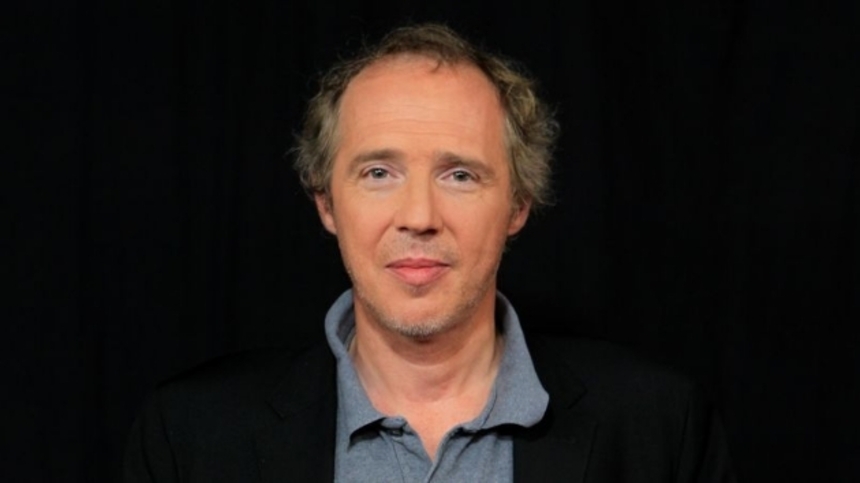 Arnaud Desplechin's magnificent new film, My Golden Days, opens theatrically today at FSLC in New York. It was preceded by a week long 8-film retrospective. I was lucky enough to snag an interview on the eve of the film's theatrical release with Desplechin, known for his slightly amplified, messy, life-like stories.

Our conversation topic went from his new film, to his muse Mathieu Amalric, to other directors work he admire. It was a great experience talking to another enthusiastic cinephile who also happens to be a director of my favorite film of the year so far.

ScreenAnarchy: First of all, congratulations for winning the Best Director award at this year’s Cesár.

Arnaud Desplechin: Oh yes. I was happy. I was very happy with that.

I watched MY GOLDEN DAYS the other day and I have to tell you. It’s one of my favorite movies this year so far. It’s really fantastic.

Thank you so much.

So we saw Paul (Dedalus) and Esther characters some twenty years ago in your film, MY SEX LIFE (OR HOW I GOT INTO AN ARGUMENT). What’s the reason behind bringing them back again after all these years?

Actually I didn’t start with the idea of writing a prequel or whatever of Paul and Esther. I started with this couple with different names. In My Sex Life, the guy was already a Parisian and the girl was from the countryside you know. Then I realized that in My Goden Days, there are four characters who have to fit together and again I thought of My Sex Life. I talked with Mathieu (Amalric), “Twenty years ago, you and I regarded Paul as a sort of a hero, so if My Golden Days is going to be a prequel of some sort, you might have to go back and resume playing that character” and Mathieu said, “ No, I wouldn't be able to make the film.”

Because things have changed since then. Mathieu is a big movie star now and he wouldn’t be able to go back and play the same character the way he did. You know back then, he wasn’t an actor. He was a technician. He didn’t plan to be an actor. So in order to go back to the character, he had to find new ways to portray - the idiosyncrasies Paul had, the difficult relationships he had with his mother, how her death made deep impact on him dealing with women. You know the fact Paul was much more cautious and shy than Esther who seems solid as a rock. I thought it would be interesting to see the birth of their love.

MY GOLDEN DAYS can’t be an autobiography since the characters are about ten years younger than you. So is it loosely autobiographical or is it pure fiction?

I can see it as both. On one hand I am older than the characters, more than ten years. But I liked the idea of making a period piece. I wanted to set it during the fall of the Berlin walls, 1989. There was still the feeling of Cold War time and how we thought of Russia and all of that ended up there.

You know I’ve been a cinephile since I was ten. We cinephiles lead a very boring life. I don’t share the expanses of experience that Paul had. He is much more adventurous throughout his whole life. On the other hand, I tried to give a sense of autobiography. I like to share the feeling the characters are experiencing.

It’s funny because I could phrase it that way - I am asking actors on set not to just give me their acting craft. I’m sure their craft is wonderful and I expect that because I respect the art of acting. But I am asking them to give me the feeling of intimacy, something… the feelings that come out when they are speaking as themselves. So I’m just trying to be a good actor amongst good actors. I am trying to give you the feeling that the film is autobiographical.

I have to comment amazing performances by newcomers Quentin Dolmaire as Paul and Lou Roy-Lecollinet as Esther. I had a chance to interview Mathieu Amalric for BLUE ROOM last year. He says he owes everything to you. What is your method for actors that they say such things about your directing?

I would say Mathieu is too generous. I owe him a lot. There is a scene in My Golden Days where Paul writes a very long letter to his friend saying that he hopes he was good for Esther. I loved the words that was written and my friend (Julie Peyr of Parisienne) was helping me on the script and she was asking me how I would film that scene. Mathieu would come and we would find out the solution! I wouldn’t dare to write such long lines but he would come and help me. I owe him so much.

I don’t know about my method. But I know one thing and I am quite proud of it. I talked with Quentin before the shoot. I never behave like a teacher. When I did My Sex Life with Mathieu, we just had dialog, just simple ordinary dialog.

The only trick, if you can call it that, I have is even though I am a terrible actor, I tried to act in front of them. So if we don’t find a solution, I’m not afraid to make a fool of myself by acting in front of them, rightly or wrongly. They see you are ridiculous. It encourages them to be ridiculous as well.

I loved where grown up Paul going off on his old friend and his wife at the end. It was such an impolite thing to do as a grownup to a friend you haven’t seen for twenty years. And that’s why I loved it. I loved Paul at that moment, his imperfections, his passion, his resolute behavior that he’s never going to forgive his friend as long as he lives.

Without Mathieu that scene wouldn’t have been possible. Absolutely not. Being passionate and being humorous at the same time. It’s serious and funny at the same time. During the scene there was a wonderful moment I realized because when Paul was 19, he was behaving like he was 55. He was too reasonable, cautious, wise… and when he finally became an old man, he behaves like he is an adolescent! That’s what I love about the scene. Paul is a fool, full of rage and anger.

Do you share the same sentiment if you were in the same predicament?

(laughs) What I share with Paul is the idea to save certain things from the past- not forget it but save it. Obviously there is a price to pay if you save the past. You have to move to another chapter of your life somehow. But you also should be faithful to your younger self.

I couldn’t shake off the film’s melancholic mood. You can totally feel Paul’s heart being broken as he drifted apart from Esther. The differences in this film from something like Fellini’s 8 1/2 is that it’s so truthful to life that we never grow up and we still act like children sometimes. That life is not really a fantasy.

Oh Huit et demi. Funny you mention that film. I just finished writing a script and I was so happy and full of excitement. I was discovering new writing process and et cetera, and for the first time in my life that my main character is a film director!

It's always difficult to do because with that kind of character, it could be obnoxious. I think I found a way. Mathieu told me one day that the best European actor we ever had was Marcello Mastroianni. An actor who was not afraid of being ridiculous and so beautiful at the same time. I think Mathieu has learned something from Mastroianni for sure.

He is your Mastroianni.

Oh yeah. He is not Jean-Pierre Leaud. He is definitely Mastroianni.

Speaking of Jean-Pierre and Truffaut, back in 2005 when you came to Brooklyn, you showed double bill of MISSISSIPPI MERMAID and THE ROYAL TENNENBAUMS instead of your movies when asked about your retrospective. Your cinephilia is well known. This year you are here for your real retrospective. What would you have shown in place of your films if you had a chance?

Funny you ask me that question. I was supposed to present a double feature at Metrograph but because of my schedule, I had to cancel it. I was going to show Frances Ha by Noah Baumbach which I adore and The Earrings of Madame de… by Ophüls. Both heroines with no full names.

That would’ve been really excellent!

You showed your admiration for Wes Anderson and Tarantino. Who are some of your favorite contemporary directors nowadays?

Right now a lot of them for sure. One of the best directors alive is Jia Zhangke, of course. I didn’t get a chance to see his new film (Mountains May Depart) but I am seeing it tomorrow. I really have a high hopes for it because I heard about it a lot and I just couldn’t see it because of my schedule.

I am also very interested in seeing the new Scorsese series Vinyl. I heard a lot of good things about that and I can’t wait to see it.

I’m really happy that you have a very strong, mature generation of filmmakers working here in America. You've always had Hollywood but today you have Tarantino - I loved Hateful Eight, Paul Thomas Anderson, who is so fascinating, and you have Noah Baumbach, whose films I love. You have a very solid generation of directors, Wes Anderson being one of them.

That’s a great affirmation of American cinema from a reputable cinephile as yourself. One film I really loved last year was EDEN by Mia Hansen-love.

She has a new one out: L’avenir. The one that was in Berlin?

The one with Isabelle Huppert?

Yeah the one with Huppert. I haven’t seen it yet.

Me neither but I am dying to. I really loved EDEN. When I was watching MY GOLDEN DAYS--

I can see the correlation with your film and EDEN.

I love that you mention her because she is the most important talent today. She stands alone in a way in France. She is so peculiar and singular…I was not lucky enough to catch her art in previous films before but after I watched Eden…oh I love that movie! Now I know I am a fan.

What’s the name of your new script?

Ismael and the Ghosts.

Oh I don’t know. I don’t write scripts with particular actors in mind anymore. I try not to do new projects with actors I already worked with. But I love him so perhaps he will be in it.

It’s been really honor to talk to you. As a fellow cinephile, you are an inspiration to me with your enthusiasm and your filmmaking. I loved JIMMY P and hope you make another film in the States. It will be fascinating.

Thank you. It will happen one way or another.

Dustin Chang is a freelance writer. His musings and opinions on the world, cinema and beyond can be found at www.dustinchang.com

More about My Golden Days