Review: MY GOLDEN DAYS, Bittersweet Words And Lust For Life 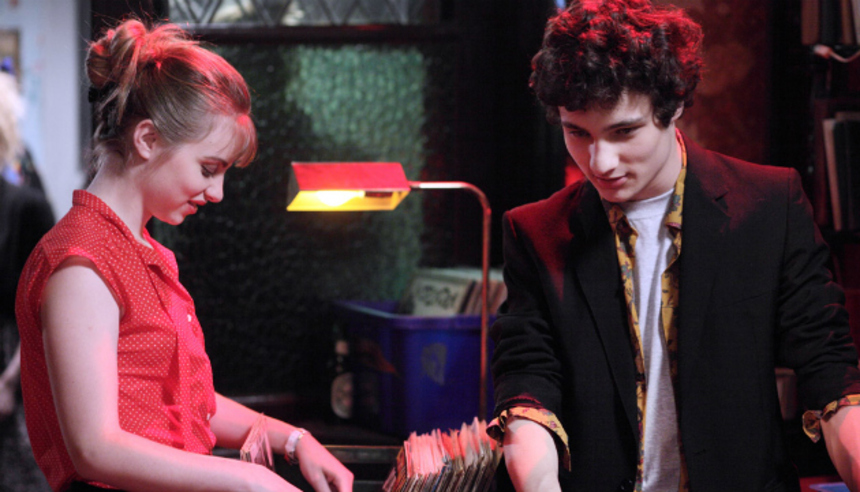 Those allergic to French film clichés should consider running in terror from My Golden Days. The hits are all there in director Arnaud Desplechin's latest, a pseudo-prequel to his even more comically cliché-titled My Sex Life... or How I Got Into An Argument. The chain-smoking? Oui. The young (male) protagonist, troubled, brilliant and sensitive? Absolument. Bouts of lovemaking, bed hopping and philosophising? Franchement, what did you expect? Now, to those who eat that stuff up, have I got news for you: My Golden Days is a wonderful, thoughtfully crafted work.

As in My Sex Life, the film follows the exploits, and yes, sex life, of Mr. Paul Dedalus, played in part by a returning Matthieu Amalric. While Amalric was the anchor for the sprawling 1996 film that effectively launched his career, here he returns for little more than a handful of present-day bookends, handing the role over to young first-timer Quentin Dolmaire. Dolmaire carries the brunt of the film as the young Paul, taking him from ages sixteen to twenty-five, from the mid-1980s to the early 90s, over the course of two hours.
The narrative of the film is best described by its original French title Trois Souvenirs de ma Jeunesse, which translates as 'three memories from my youth.' Not only does that better set-up the three chapters that make up the story, but because for the most part, many of Paul's experiences are anything but golden.
None are grimmer than those of the first and shortest chapter, 'Childhood'. There we are introduced to the 11 year-old Paul (played here by youngster Antoine Bui), his younger brother and sister, and the sad set of circumstances that lead to their de facto orphanhood. The second chapter, 'Adolescence' takes the surprising guise of a thriller. The now teenaged Paul uses the occasion of a school trip to courier paper and money to political dissenters behind the Iron Curtain. Leaving his passport behind as well, he later finds out someone had been living under his name since the mid 80s.
The final, and by far longest chapter (indeed, it makes up the bulk of the film) is simply titled 'Esther'. Would you be shocked to learn it tells the story of the years-long relationship between Paul and a doe-eyed heartbreaker named, what now? Like Paul, the character of Esther figures prominently in Desplechin's 1996 outing, but the details of their relationship and really the entire narrative differ considerably. It's why I used the term 'pseudo-prequel' before. If anything, the film is something of an arthouse reboot, a repurposing of old characters to tell a new stand-alone tale. 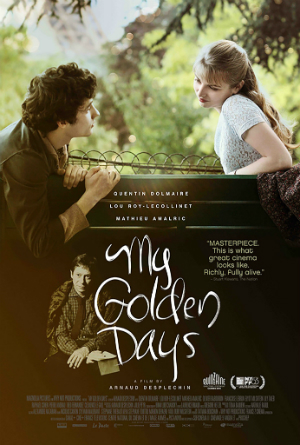 It is a bittersweet tale at that. The two make a combustible pair, and the film crackles with the shared chemistry of Dolmaire and fellow newcomer Lou Roy-Lecollinet. But life and school and finances (or the lack thereof) always conspire to keep them apart.
Over the span of some years, they will break up and reconcile, each take other lovers and then compare, party into the wee hours and read Greek tragedies in bed. The energy of their pairing is matched beat for beat by Desplechin's buzzy style.
The director has a clipped and quick shooting/editing rhythm; he digs deep into the toolbox, using old-time irises and omniscient voiceovers, harkening back to both silent cinema and classic novels. To watch one of his films is to feel as if on a two-hour caffeine and nicotine high.
Mind you, the stimulants are helpful for the amount of information he packs in. Days is damn talky, verbose with love letters read directly to the camera, lectures on Claude Levi-Strauss and conversations about self-determination and political dissent. But there is a singular through-line that cuts through the heady talk, the discordant genres and the cigarette haze: Paul's quest to make himself.
Like all of us, Paul's path to adulthood is ushered through his relations and experiences. And those two first chapters, showing his orphaning and then literal loss of identity, only remind us how much he's going into that process as a blank slate. The resulting wash of ideas and emotions is not just a frenetic director throwing it all up on screen (although with Desplechin, that is in small part the case) but the depiction of insatiable adolescent hunger. They may not all be golden years, but that doesn't temper Paul's lust for life.

Review originally published during the Cannes Film Festival in May 2015. The film opens in select theaters in the U.S. on Friday, March 18.

More about My Golden Days