Sundance 2016 Interview: BRAHMAN NAMAN's Q And Team Talk It Out 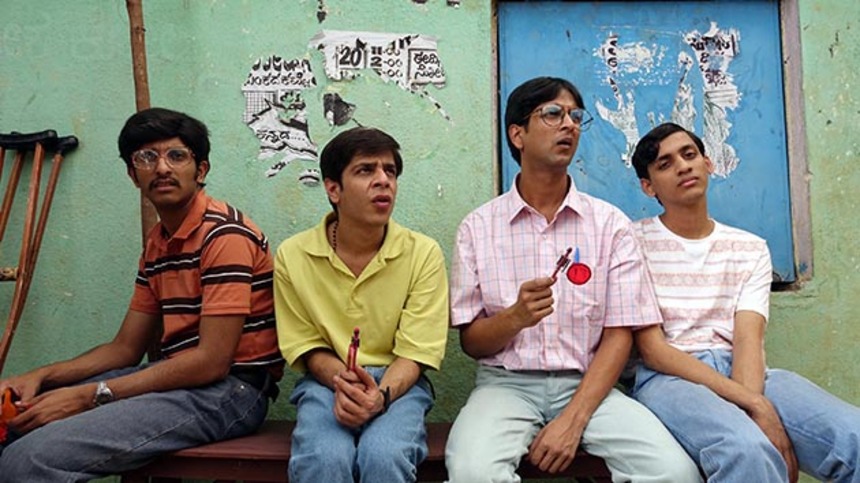 After watching Brahman Naman, the latest film from the Indian director known simply as Q, I had the opportunity to sit down with him along with the writer, Naman Ramachandran and three of the actors from the film; Sid Mallya, Shashank Arora, and Tanmay Dhanania. I enjoyed my conversation with the filmmakers just as much as I enjoyed the film itself.

Q: Why beat around the bush?

I hope that pun was intended.

Q: Let's say it was. If you are going to put anything like that, you might as well get on with it. Something tells me that sexuality in India needs to be addressed and no one is taking it up. The space is wide open so I don't see the point in not doing it. At the risk of seeming crude or it looking like we are making pornography or whatever people are saying you are, I think we are all grown up enough to deal with that. And luckily, Naman (referring to the writer of the film) is as crude and dodgy as I can ever hope to be! When the script came to me I was like, "okay, this is a given."

The movie takes place in the 1980's. I thought the VHS looking animations and title cards was a very effective way to remind us that we're in 1980-something without needing to hit it over the head within the context of the narrative or with a cheesy film effect. But why set Brahman Naman in the 1980's to begin with?

Q: I think it was important for us to understand that India was very, very different then and it changed rapidly in the 90's and we have become a culture right now which is money minded and everything is predicated on a commercial existence. Whereas in the 80's, it was not like that at all. We grew up, Naman and I, in a very different way than boys growing up now. The kind of access that he was talking about... not only that, but life itself was taken much less seriously. You would not take yourself so seriously and that's a big, big difference. Right now, the idea of the individual, for the youth, is that they feel important. Every time they take a selfie, they feel important. I think went through 24 years of our lives where nothing felt like we were important in any way.

Naman: That I think is a great experience and I think we have completely forgotten that.

Q: It was important to remind ourselves through this film about that time.

Naman: That's a great point. Even when we were winning quizzes back in the day, there were no photographs.

Q: I might have 15 from my whole childhood. Nobody cared. Why would anyone take a picture of me? That I think was a very crucial thing.

The idea of 'generations' is a recurring theme. What gets passed down from one to the next and what changes. For instance, the traditional piety of Naman's parents does not seem to stick with Naman, but the quiz teacher being a heavy drinker does seem to get passed down his students, even to the point that he's drinking with them.

Q: I think things have changed drastically. The idea of political correctness, we did not know of this and what teachers did would not have be politically correct and it was beautiful because they could say exactly what they wanted to say. They were real people, not hiding behind social morals and worrying about what you can tell a kid. That gave us enormous strength and built relationships like with Bernie and Naman. It's very deep. They are friends just as much as they are mentor and pupil. They are all the same but that feeling is gone right now. Now you can't have a teacher who is also a friend, who you are going to a brothel with! It's not going to happen and we've lost something there. Something magical, something funny, something important.

Naman: Bernie is not based on him, but I had an English teacher who once or twice a week during university at lunch and he would buy us beer and we would come back for the afternoon class and it was most entertaining! I can't see any lecturer doing that today.

Q: And therefore, we learned so much more about English and life because we were learning like that, not in some clean environment.

Shashank, Tanmay and Sid, as well as the other actors who are not here - you had great chemistry on screen, both as enemies and as friends.

Tanmay: Shashank and I hit it off right off the bat. Like right when we got the call, he was in Bombay and I was in Bombay and that first night we stayed up and chatted. We also had a week of work-shopping and we shared a room together. At night, we stayed up talking, especially the first few nights, just to get to know each other. That helped and we are really close now as well. The work-shopping was also very important to really get the chemistry out, even though it was basically already there. It's a very interesting relationship between Ajay and Naman. I mean, Ajay is the rock but he also wants to please Naman. He almost has a crush on Naman in some ways. A plutonic crush.

Q: I see that. Even the Ronnie character with the girls behind him but the guys all together and the guys are much more physical with each other, hugging each other. I mean, they can't take the picture of the girls panties, they're too scared, so they take a picture of Ronnie's cock when everyone else was passed out instead. The fuck was going on there?

Naman: We had them really feeling the relationships and experiences to make sure these things were natural.

Q: Four days before the shoot Chaitanya, who plays Ramu, fell off a stage and broke his foot. We got a call from the hospital. Naman had an ashen face but I was like, "fucking genius!" and we incorporated it into the script.

Naman: It turned out to be very funny.

Q: Yeah. We used the reality of what they were doing and adlibbing the lines as well as the situations. Using the props. Making it all feel right.

And Sid, amidst all of that, how was it playing Ronnie, the jerk?

Sid: Well, I didn't do the workshops that they did because there was supposed to be a disconnect. I did a lot once I was there with the other jocks and with Ronnie's girlfriend. It separated us and made us look at them like, well, there is no hate - just a rivalry and a deep set insecurity. Ronnie sees that they are very smart. I mean, you don't invite your enemy to your party and I think that was the main point of that scene. It was a mark of respect in his own way, in a backhanded way. "I'll invite them, but I'll make fun of them."

Q: It should be mentioned that Sid came to us before the production with a lot of research and writing on his character's backstory. All of them put in a lot of work for preparing for their characters.

Is that something you always ask of your actors?

Q: Acting in India is very different than what you know of acting here. It's a relief that we have a few actors now who have that same sensibility.

The caste system plays a big part in the story. Can you give us some context for the minutia of this system and how it plays into the story and the interactions between the characters?

Naman: Right from the dawn of time, India has been divided into four castes. The so called highest class is the priestly cast, the Brahmans. Then there is the Khsatriyas or the warrior class. The Vaishyas is the business community and the Shudras who do all of the menial jobs. Brahmans have always enjoyed some kind of superiority. But it's self imagined and the class system has systematically destroyed India over millennia. Q and Sid and I are Brahman class and that's why we had the right to make fun of the system and of the Brahman caste because if anyone points a finger, they can't say anything.

Q: Also it's important to know that this form of civilization is not the only civilization in India. There was a civilization before. Definitely there was a different community that came in who were new to the space and they became the dominant factor. It's kind of like the American Indians on reservations.

It's been a process of manipulation of the way your social system will work. It's so complex right now that it's difficult to make sense, even as an Indian. But this is simple to understand: we have to get rid of the caste system because it's completely ridiculous and people are dying every day because of it. Even yesterday there were three deaths. A week and a half back, a PhD scholar hung himself and his suicide note was about his place in the class system.

Would you say it's changed since the 80's for the better, worse, or is it the same?

Q: I think it's going bonkers right now. It's much worse. Then, there was no hate. We didn't hate as much as we do now. There is now a sense of intolerance. It's happening everywhere, this sense of, "this is me and that is you."

I thought you used wide angle lenses really effectively in this film although it was in an unconventional way. For example, a lot of the close ups are shot with very wide angle lenses which makes the characters feel like they are right up in you face, just as they are in each other's faces.

Q: We were working with a very minimal budget and that gave me a clear direction to focus on. We had minimal props so therefore, if there is one bench, we sit them down all three together and how do I shoot that? There is only a wall and a bench. So the lens thing came in while we were work-shopping. I wanted to minimize our options because we didn't have the time or money so we made the decision to use only two lenses. But then later, I realized I didn't want to change the lens at all. I didn't even want to change angles a lot of the time so a lot of the scenes became set pieces and it gave the actors the liberty to do that comedic timing and not have the scene broken up and then we would just jump and come closer with the same lens. It also mattered because of time. We had to shoot the movie in thirty days so all of that played into the aesthetics.

We're the sexual scenes more fun and funny to shoot or uncomfortable and awkward for you, Shashank?

Shashank: Well, not in front of 50 people.