J Hurtado
Editor, U.S. ; Dallas, Texas (@HatefulJosh)
Tweet Post Submit
With the Sundance Film Festival less than a week away, it's time to start digging into the line up and the films that we think are going to be worth talking about when it's all done and dusted. For me, there's one film in this impressive line up that has my attention more than any other, Bengali director Q's Brahman Naman.

Brahman Naman appears to be a unique entry in Q's oeuvre, in that it is his first English language film, as well as a straightforward narrative feature, and a comedy at that. The film, written by first time screenwriter Naman Ramanchandran, is the story of a quartet of quiz kids in '80s India who make a testosterone fueled cross country dash to defeat their arch rivals and hopefully pop their cherries at the same time. Today over at IndieWire, Brahman Naman unveiled detailed looks at its main characters and we think they're worth sharing. 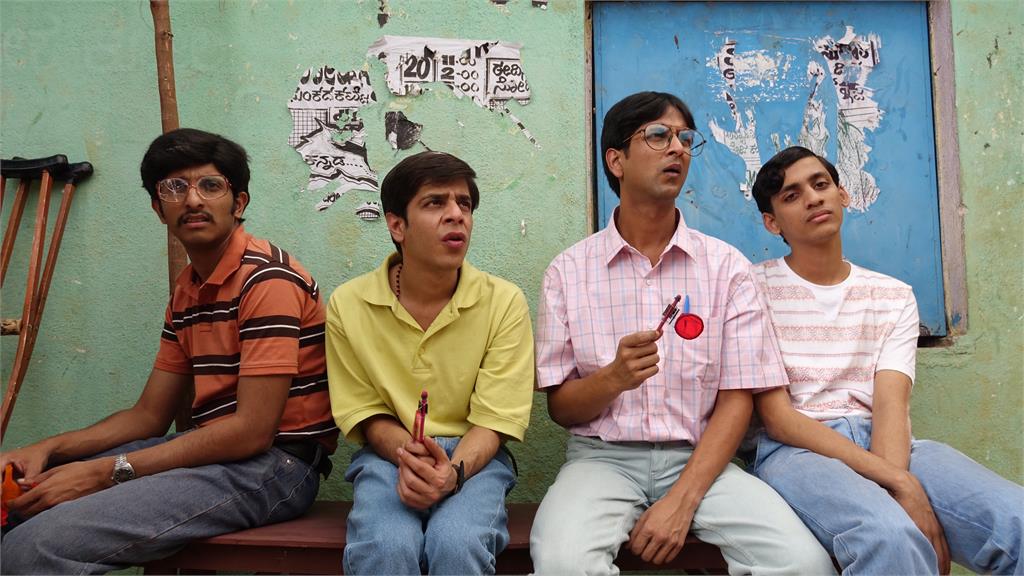 We've been following Q's career since the world premiere of his avant garde international festival hit Gandu. With each film he's moved a tiny bit closer to straight ahead narrative, but never quite close enough to garner the kind of attention that gets filmmakers the options to to their own thing. This time around, though, things are looking a bit different for Q and Ramachandran. While we haven't seen the film, we have been privy to a few minutes of footage, and what we've seen is phenomenally hilarious. Ramachandran's script and Q's innate fearlessness mean that we're looking at a potential game-changer for both of them, and after watching Q grow over the last five years as an artist, I'm excited to see what happens when all of that potential is unleashed.

The italicized content is courtesy of the Brahman Naman team, but I'll add context where I think it's helpful.

Here are the four leads, nerds in heat if you will, of Brahman Naman and the supplied synopsis.

We'd like to introduce you to the colorful characters of BRAHMAN NAMAN. It’s the 1980s and Naman (Shashank Arora, star of Cannes hit TITLI) is a know-it-all nerd driven by the whims of his raging hormones. Heading up Bangalore University’s team of bespectacled misfits (best friends Ajay and Ramu), the trio of lusty intellectuals spend the majority of their time on the quizzing circuit, using their winnings to buy nudie magazines, whiskey, and beer, fantasizing about the buxom neighborhood beauty all the while. When the boys qualify for the National Quiz Championships, they make a booze-fuelled train trip across the country determined to defeat their rivals in Calcutta and desperate to lose their virginities along the way.

The titular Naman is played by Shashank Arora, who recently wowed Cannes crowds with his portrayal of a young adult trying to escape his criminal destiny in Kanu Behl's Titli. In addition to Brahman Naman, Arora is also working on Rock On 2 and more interestingly to me, The Song of Scorpions with Irrfan Khan directed by Anup Singh who had a festival hit a couple of years ago with Qissa. This film marks his English language debut.

Ajay is played by Tanmay Dhanania

A loyal member of Naman’s posse, Ajay is Naman’s left-hand man on Bangalore University’s quiz team (his right hand is his most loyal lover). A Shakespeare aficionado in stylish spectacles, he excels at scooter-driving, beer-guzzling, and manages to suppress his sexual demons beneath a socially awkward exterior. His definition of love is “physical action over a smart verbal comeback.”

Playwright and director Chaitanya Varad plays Ramu. This is his first film role, but he has plenty of experience on stage and behind the scenes.

Serving as Naman’s preferred human humping pole, Ramu is a vital member of the quizzing team. Unfortunately for him, his father disapproves of everything he does—not only ogling nudie magazines, but quizzing too. His favorite day of the week is “Coco Panties Day”—the day on which bets are placed hypothesizing over the color of girls’ underwear. Ramu often emerges as a champion on this day. Fact: will sing Rod Stewart’s “Infatuation” upon arousal.

The last member of the quartet is Randy, played by Chennai stage actor Vaishwath Shankar.

While Naman and his friends spend all their time polishing their “pathetic one-liners,” Ronnie is out winning cricket championships—and the attention of all the girls in the class. Handsome, rich, and athletic, much to Naman’s dismay, Ronnie has the full package—and a rather large one at that. Fact: he has never had a bad hair day.