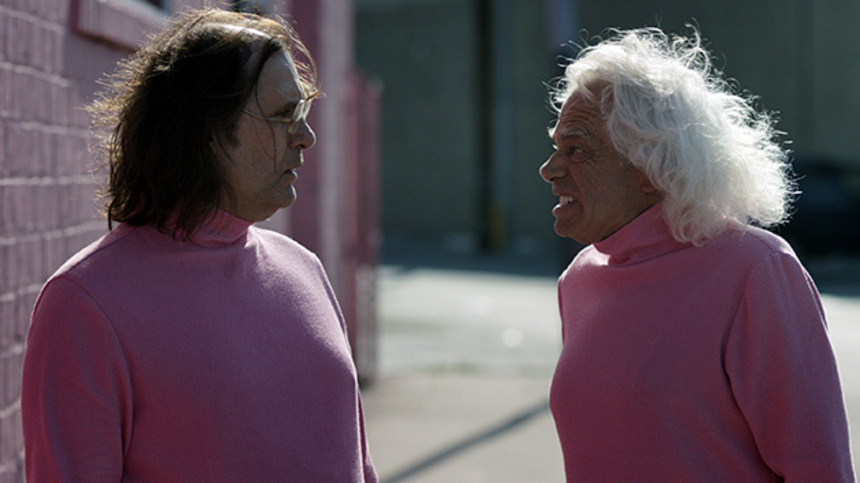 Alright... So, a plot: The rough sketch is that 40-something year old Brayden (aka Big Brayden, aka Sky Elobar) still lives with his father Ronnie (aka Big Ronnie, aka Michael St. Michaels). The father and son duo spend most of their time hanging around home in their undies, cooking up greasy meals, and running their walking disco tour. This tour provides the perfect opportunity for Big Ronnie to exercise his number one talent as a bullshit artist.

If the art of bullshit is Big Ronnie's biggest talent, his second love is murder. But not just any kind of murder - Big Ronnie is also the deranged killer known as The Greasy Strangler; a man covered from head to toe in grease, including his rather sizable (and greasy) member. The Greasy Strangler takes out his mad aggression on unsuspecting people who have done Big Ronnie wrong by - you guessed it - strangling them.

The father and son's comfy (and greasy) life is thrown into upheaval when Janet (Elizabeth De Razzo) joins their walking disco tour and immediately takes a shining for Brayden. First Big Ronnie is annoyed that Brayden is distracted from their work (and his greasy supper), but annoyance quickly turns to jealousy when Big Ronnie realizes that his son is actually gettin' some.

If it sounds like there is a good amount of plot to The Greasy Strangler, then you aren't wrong. But that plot definitely plays second fiddle to the all-out weird dialog and bizarre character interactions. There is a scene early on in the film where characters literally spend over two minutes pronouncing the word "potato." I was rolling on the floor laughing. For all the super weird humor, the vast majority of it is actually quite funny.

Did someone say penis? A fair piece of warning for those squeamish about the male anatomy: there are more scenes with exposed dicks than without (don't worry, they're prosthetic... I hope). The exposed penis humor is so utilized you actually get bit desensitized. And it doesn't stop at male anatomy. There may have never been a film with more laughs strictly coming from how funny the naked human body actually is.

It's perhaps no surprise that with the producing talent involved with The Greasy Strangler, the film would be such a success. That includes Tim League, Ben Wheatley, Ant Timpson, Theo Brooks, and the good dudes at SpectreVision. You get that much talent together and you're bound to come up with something awesome. But all the credit goes to Hosking. He has managed to make one of the weirdest movies, maybe ever. The secret might just be to never hold back (on the grease).