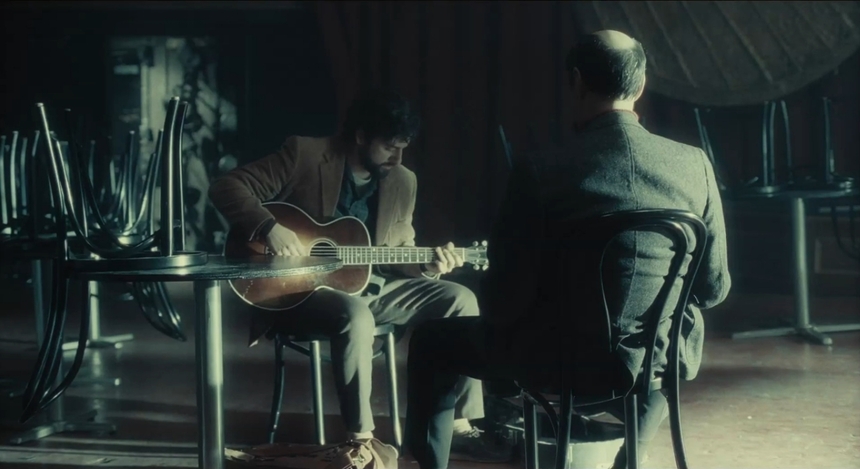 "If it was never new and it never gets old, then it's a folk song."--Llewyn Davis.
A great folk ballad has a powerfully worded chorus, then journeys through a descending series of verses to emote its hard-luck tale. By the time the ballad returns to its final chorus, the words are familiar but the song has earned an entirely new weight. Similarly, Inside Llewyn Davis begins and then eventually circles back to The Gaslight. Fans of Bob Dylan will immediately recognize the Gaslight as the location of many early Dylan recordings. The Gaslight is a pivotal folk coffee-house of the early 60s Greenwich Village scene that was booming long before Dylan joined the party. And yet the heroes, mayors and vagabonds that brought the culture into fruition have been mostly forgotten by history and swallowed by time. Originally, the Gaslight, and places along the strip lauded local talents and aided in lending them a voice and putting them on the scene's map. Now it's Dylan who puts the Gaslight on the map, keeping it alive in cultural memory. And who was initially offering the Gaslight it's steam, making it a desirable homecoming for truth seekers like Dylan? It was people like Dave Van Ronk, who is, to this day, known as "The Mayor of MacDougal Street" - a name that also serves as the title of his memoirs, cowritten by Elijah Wald. The memoirs delight in recounting the salad days of Greenwich folk's purest form before outsiders began bandwagoning and contaminating the scene with careerist ambition. This is not meant to apply that Bob Dylan was bandwagoning exactly - he did after all Greyhound to NYC from Minnesota with the prime intention of spending Woody Guthrie's final days by his bedside - but there is at least a sense of tongue-in-cheek fist wagging on Van Ronk's part, for all the times Dylan sponged his lessons and stole his thunder only to eventually swallow the entire movement with Dylan's increasing popularity and inspire self-doubt among the most authentic of the lot.
Columbia Records, is, and always has been a major establishment in the business of selling pop music to the masses. What 'pop' entails is an almost random entity entirely subject to a given era. Should the limelight arbitrarily land on folk, the job of the record company becomes to produce a safe outfit that checks the boxes of what researchers decide is trending. Very rarely, an entirely different entity squeaks through onto a major label with such miraculous talent and force, no record company or audience could shape it. Before Dylan, making a million dollars with folk music didn't even occur to anyone. If anything, success was seen as a sign of illegitimacy. And in a scene where the most authentic singer/songwriters were determined by those who dug the furthest back into the lineage of the roots ballad to weave a timeless tale, here was a man looking forward through original material. If they were jealous of Dylan's Columbia contract, what did it say about their roots-values and the integrity of their so-called purity.
These are just some of the events and ideas that serve as the Coen brothers' jumping off point. Though the character, Llewyn, has more than a few references to the real life mayor of MacDougal street as source material - even going so far as to borrow the album title - "Inside Dave Van Ronk" - Llewyn Davis is no more a faithful representation of Van Ronk than O Brother tells the story of "Homer's Odyssey", or The Hudsucker Proxy tells the story of the hula hoop (y'know, for kids!), or Barton Fink as modelled after Otto Friedrich. The Coens have a long-running tendency to take a big event and hang it on the shoulders of the most unlikely, ordinary character (The Dude as Phillip Marlow, the small town Minnesota police dealing with unfathomable evil, a simple suburban Jew versus mortality etc). "It would never have occurred to us to make a story about a successful folksinger", says Ethan Coen. In Davis, The Coens found the perfect framing device for their tale of authenticity in the struggle of art versus commerce, integrity of ambition versus selling out.