Pretty Packaging: BATTLES WITHOUT HONOUR AND HUMANITY Packs A Whallop

Ard Vijn
Editor, Europe; Rotterdam, The Netherlands (@ardvark23)
Tweet Post Submit
(This set may actually be worth it losing a pinky finger for...)

Years ago, I attended a lecture by Tom Mes on certain cultural aspects of Japanese society as shown in cinema, and clips from Fukasaku Kinji's Battles Without Honour and Humanity were shown. Immediately afterwards, me and my friends tried to see if this series was available. Alas, fine boxsets were available, but often expensive and out-of-print.

Then, earlier this year, distributor Arrow announced they would be releasing a big combined Blu-ray DVD boxset of all five films as a pimped boxset. And I yelped with joy. It may have been the single best announcement since Criterion told everyone they'd be doing "something cool with Zatoichi".

Well, the set has arrived and it's one of this year's best. It's actually light on pimpage in the form of posters, cards and trinkets (there are none), but all the attention went into the on-disc extras and the book. And I don't mind that at all, especially if that approach gets us this end result. Kudos to friend-of-the-site Marc Walkow who produced this behemoth on Arrow's behalf: this is seriously what we call "a job well done". 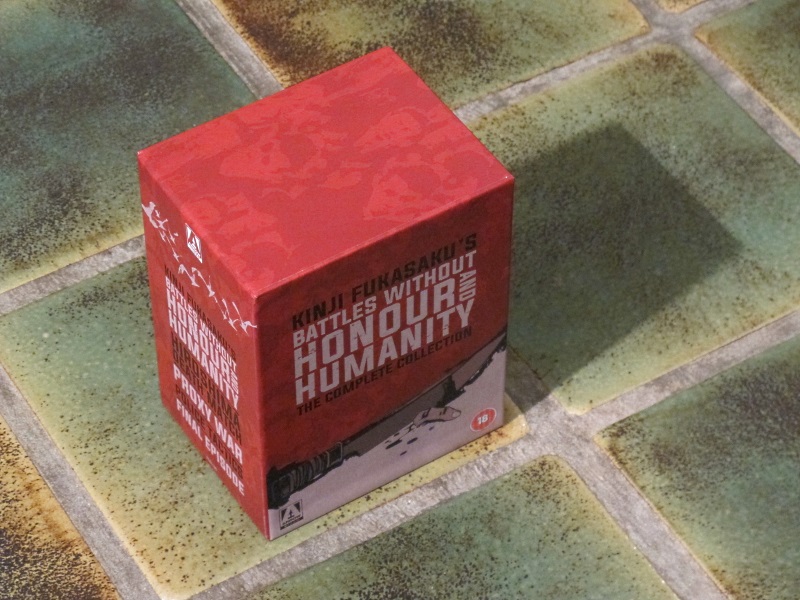 Note to those West of the Atlantic: the US version looks the same, but it misses the "U" in "HONOUR" and (lucky you) that awful BBFC certification notice. 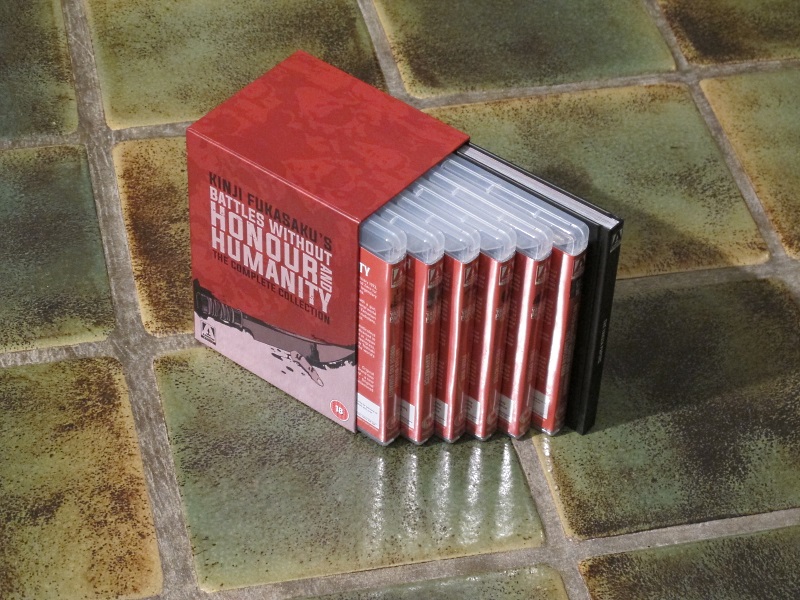 In the box, there are six Amarays and a hardcover book. 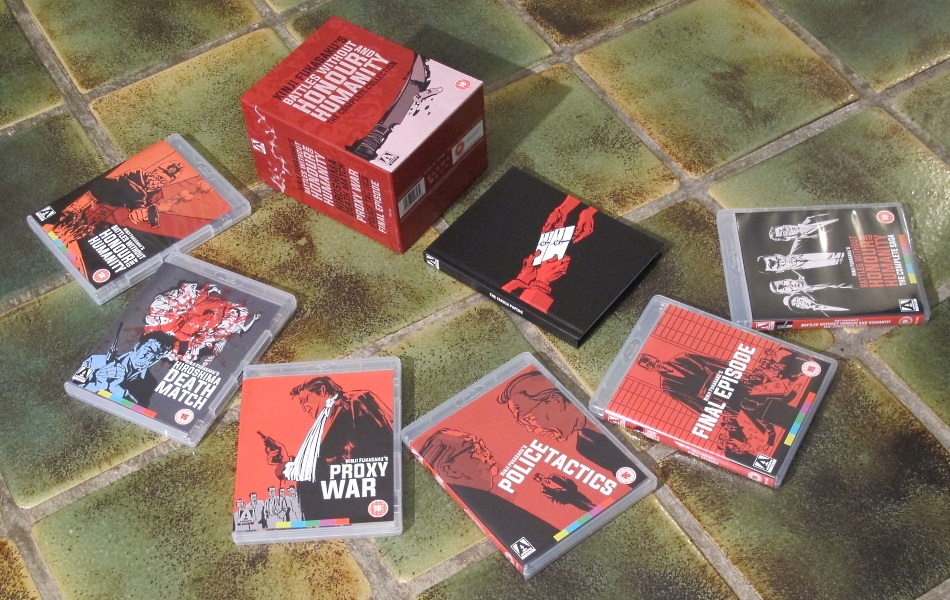 The contents displayed.
Not only does it have the five films, it also has the four-hour compilation film as a sixth title. Thorough! 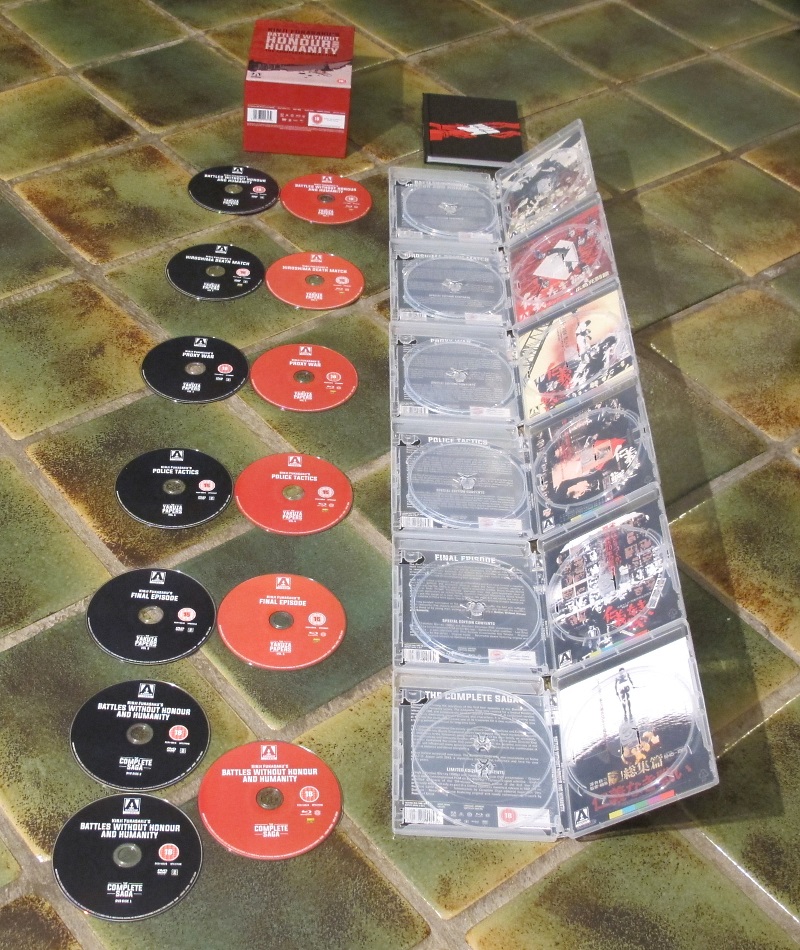 All contents opened.
The Amarays all have the original Japanese posters as reversible covers. I may even end up indeed reversing them all, though I do like Reinhard Kleist's new cover designs as well. 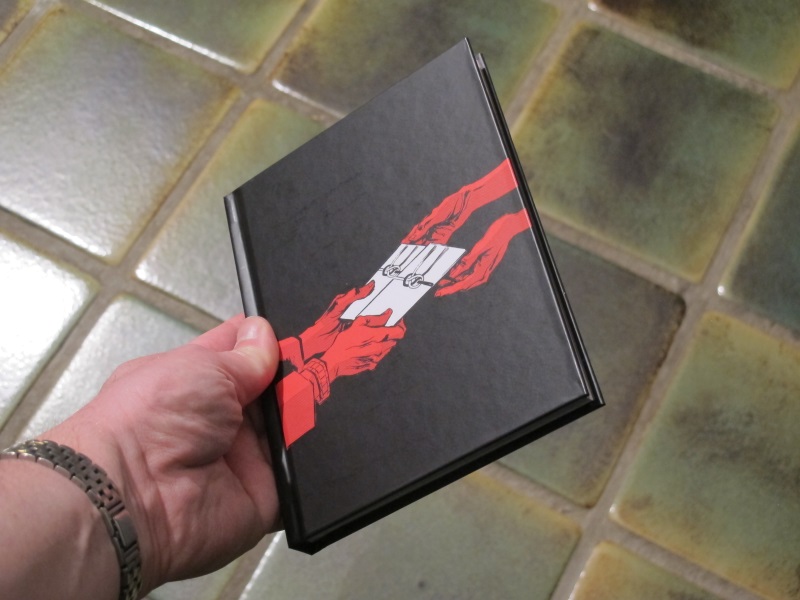 And here is a closer look at the 152-page hardcover book. As shown in the next picture, it contains a treasure-trove of articles, pictures and overviews of the series and its place in Japanese (film) history.

Heh, and it even has an article by the very same Tom Mes mentioned above!

There are articles, essays, pictures, interviews, and useful schematics inside. Lots and lots of text, and all of it interesting. 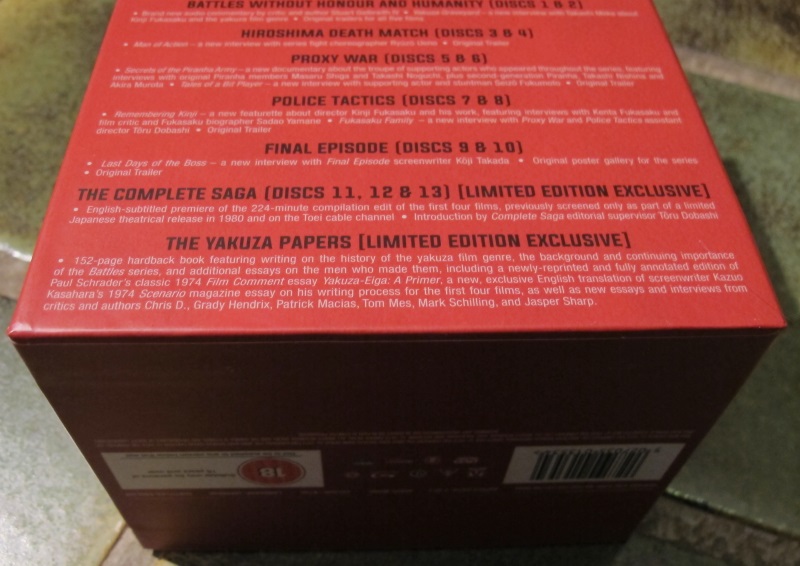 You need an epic Star Wars-like scrolling text to list all the extras in this set. It's a fantastic piece of work, and a definite contender for "release of the year"...

More about Battles Without Honour and Humanity