CROUCHING TIGER, HIDDEN DRAGON 2 Trailer Is A Bit Of A Mess 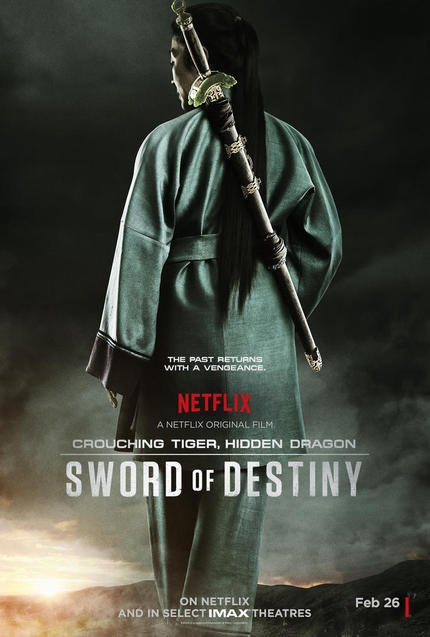 There are a lot of traps you can walk into when making a sequel to a beloved film fifteen years later. A lot of them. And while I was hopeful that the Yuen Woo-ping directed Crouching Tiger, Hidden Dragon: Sword Of Destiny would avoid at least most of them and do justice both to the original film and the large volume of untapped source material that spawned Ang Lee's original film - there is a lot of story left to tell there - it would appear that, no. They've walked in to pretty much all of them.

The original film is pretty close to a masterpiece, in my book, a film filled with fabulous performances, emotional restraint, stunning production value and, yes, some incredible fight work. But the just released trailer for Crouching Tiger 2 doesn't showcase any of that. There's the absolutely god awful digital rendition of Bad Moon Rising providing the soundtrack, for one thing. There's also the perplexing decision to make the film in English, after the Mandarin language original grossed over a hundred million at the box office putting the lie to the idea that people wouldn't watch this if in Chinese. And while Michelle Yeoh is certainly more than capable of delivering a quality performance if she's done so here they've chosen to ignore it in favor of showcasing an obviously CGI Donnie Yen fighting on a pagoda with a digital render and animation so unconvincing that it wouldn't pass muster as a video game cut scene.

Take a look at the trailer below and let me know if you think I'm being too harsh. Or, you know, join the pile on.

Do you feel this content is inappropriate or infringes upon your rights? Click here to report it, or see our DMCA policy.
crouching tigerdonnie yenmichelle yeohsword of destinytrailer