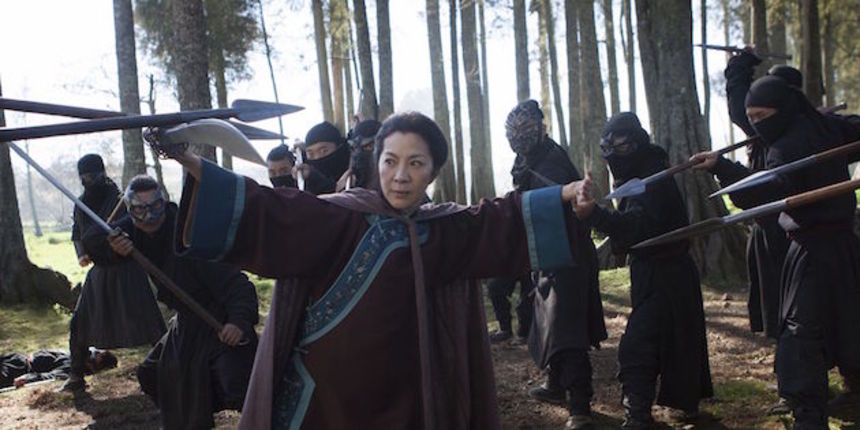 It was an odd weekend at the movies, and perhaps telling in that none of the oddness took place in a traditional movie theatre, unless the Kodak Theatre counts, which I don't think it does.

While Chris Rock and Sacha Baron Cohen were making ill-conceived, ill-received Asian jokes on the 88th Academy Awards telecast, the highlight new film release (at least among cinephile circles, and even there, I would acknowledge that it's really little more than a curio) was the Weinsteins' long-mooted Crouching Tiger, Hidden Dragon 2, which must certainly now be in the running for the least-wanted sequel of all time. Fifteen years after Ang Lee's wuxia classic, whose opportunity as a franchise-starter extended exactly as far as leaving one principal character alive and no further... well, who in the hell cares?

OK, perhaps I am being unfair: I am reminded that the original CTHD is, of course, still the reigning highest-grossing foreign-language film in North America. That's no small feat, though I'd suggest that coming as it did at the tail end of the indie-boom 1990s, and a year after The Matrix made kung fu cool in North America again, Crouching Tiger was an easier sell in the west in 2000 than it would have been in most other years.

(Also, as must be remembered whenever anything makes substantially more bank than we might have predicted: it was also a terrific film. That helps.)

So a sequel, even one as late in the day as CTHD2: The Sword of Destiny, makes a tiny bit of financial sense. I was underwhelmed by the Netflix Original release when I watched it on Saturday night, but then, that was pretty much what I was expecting. (Our Kwenton Bellette was less favourable, though not by much.)

While watching The Sword of Destiny, though, I couldn't help but muse upon the fact that I was watching a relatively prestigious new release featuring a non-white, female, lead character in her fifties, and that it was an action movie to boot. This, surely, will be the only such example in 2016.

The caveats, of course, tell the tale.

Caveat one: as has been bemoaned and anywhere else that film fans have common sense and a modicum of taste, the new film was shot in English by its entirely Asian cast, because even in 2016, the prevailing Hollywood wisdom remains "Amurricans won't read subtitles, no they won't."

(It was also, distractingly, shot in New Zealand as well as China, and in gleaming, high-saturation HD no less; if you thought you saw a couple halflings run past Shu Lien in the opening sequence as she rides through the Shire the countryside, you're probably not wrong. This thing is one high-frame-rate short of being the fourth Hobbit movie - and just as perfunctory.)

Caveat two: this might very well be an action movie built around an older Asian woman, but her role is cast in one of the few vernaculars in which American audiences are willing to engage with Asian people: the martial arts.

At the Oscars, Chris Rock and Sacha Baron Cohen built on this ghetto of acceptable Asian stereotypes in American media. For Rock, it was the Asian accountant and/or child labourer; for Cohen, even more baldly, it was little yellow men with little yellow penises.

Now. To be clear: I think Chris Rock navigated the whirlpool of #OscarsSoWhite / #BlackLivesMatter about as clearly and cleanly as could be done without actually standing mute, while refusing to surrender the stage, from the moment the curtain went up.

He was there to do a job and he did the job, and yet also managed to fire jab after jab after jab (like Creed himself, to extend the analogy!) all night long, against Hollywood's complacency, self-congratulation, and (in his finest, most cutting analogy) "sorority racism."

Certainly, as has been pointed out elsewhere and in more depth, Rock's attacks suffered by boiling the entire representation issue down to black vs. white, though I suppose we can allow him the dialectic given that it is, of course, his lived experience.

Layering Asian jokes on top of that line of insight, though, only problematized matters further. I will allow that his child labour joke, with respect to the tens of millions of angry tweets that we quickly generated, was on-message for his prevailing theme of the evening: this representation problem is serious and important, but there is a shit ton of basic privilege supporting the entire protest, including the ability to, say, drink unpoisoned water. Or type this column on a computer I bought for less than my first year university tuition - which I was also able to pay for.

But a week after Marvel went ahead and cast a Danny Rand who looks exactly like Danny Rand in the comics, thereby promising us yet another White Saviour narrative in their very White Saviour-y Iron Fist storyline, the weekend unintentionally, and therefore quite pointedly, gave us view into every garret an Asian is welcome to stand in modern American pop culture: the karate expert, the numbers guy, the faceless labour force, the yellow man with the little dick.

The Other, in other words (pun intended); and #OscarsSoBlack will be trending for decades before we even begin to see that change.