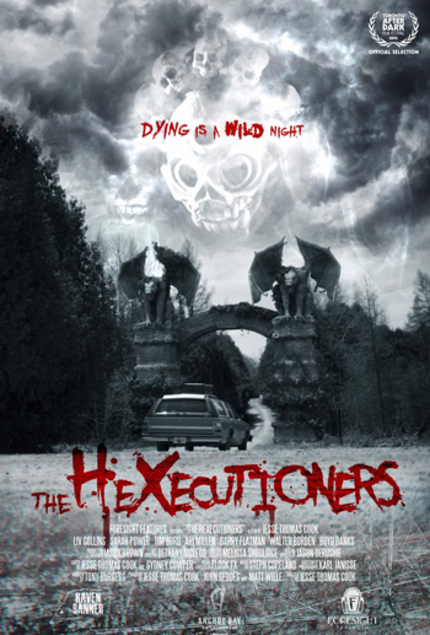 Word from our friends at Raven Banner Entertainment is that they have picked up the World sales rights for Jesse Thomas Cook's rural horror flick The Hexecutioners.

Raven Banner lands cult thriller "THE HEXECUTIONER'S"
Toronto, Canada - Raven Banner Entertainment has picked up World sales rights to the cult thriller "THE HEXECUTIONER'S" which marks the second direct collaboration between director Jesse Thomas Cook (Monster Brawl and Septic Man) and Canada's nefarious scribe Tony Burgess (Pontypool and Hellmouth).
The film tells the story of Two young women working for a Rite-to-Die, an assisted suicide company who are dispatched to a remote estate to perform a custom euthanasia ritual, but they unwittingly summon the spirits of a death cult that once inhabited the property.
The film stars newcomer Liv Collins, Sarah Power (Repo! The Genetic Opera, The Killjoys), and Tim Burd (SAW II, Septic Man) along with a list of character roles from Ari Millen (Orphan Black), Barry Flatman (Fargo, The Dead Zone), Boyd Banks (Dawn of the Dead, Hellmouth) and Walter Borden (Gerontophilia).
This is the sixth feature that Raven Banner and Foresight Features have collaborated on.

The Hexecutioners had its World Premiere at Toronto After Dark last month. You will find the link to my review below.
Tweet Post Submit

Do you feel this content is inappropriate or infringes upon your rights? Click here to report it, or see our DMCA policy.
Raven Banner EntertainmentThe HexecutionersJesse Thomas CookTony BurgessLiv CollinsSarah PowerTimothy BurdHorror