Ard Vijn
Editor, Europe; Rotterdam, The Netherlands (@ardvark23)
Tweet Post Submit
(Maybe I should have put a comma between "bloody" and "stylish", because DAY-AMN...)

Clive Barker's 1987 horror film Hellraiser does not lack for home releases. In fact, some of the past DVD-editions have had gobsmackingly awesome packaging, with the franchise's infamous "lament" puzzle-box having been recreated in cardboard, and sometimes even in plastic.

So I was a bit surprised when earlier this year, UK distributor Arrow announced they would focus on a new home release of Hellraiser, and indeed would create a bells-and-whistles boxset of the first three films in the series, called "The Scarlet Box". New 2K Blu-ray transfers for all three films, booklets, artwork, and tons of extras... the works!

Surprised I may have been, but Arrow has been on a roll for the past few years, so I was quick to pre-order. And a good thing that was too, as "The Scarlet Box" sold out quickly. I still see them being sold on-line, but for three times the amount I paid for it. Phew...

Yesterday, my friendly neighbourhood postman delivered the package, and it looked as great as I had hoped. The absence of a physical puzzle-box is perhaps to be lamented (pun intended), but that doesn't mean this release is a straggler.
So here is a closer look at the packaging job Arrow did, by way of a gallery of shots. Click on the edge of the pictures to scroll through them, or at the center of each to see a bigger version. 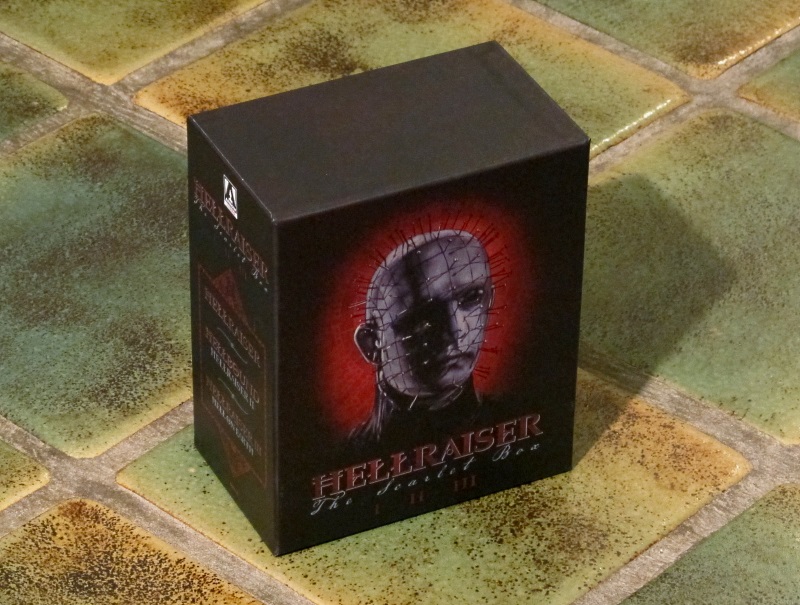 And here it is: "The Scarlet Box", adorned by everyone's favorite cenobite Pinhead, courtesy of artwork by artist Gilles Vranckx.

Note that the boxset comes with a wrapper, and all BBFC ratings and such are on the wrapper, not the box itself. Which makes me happy. 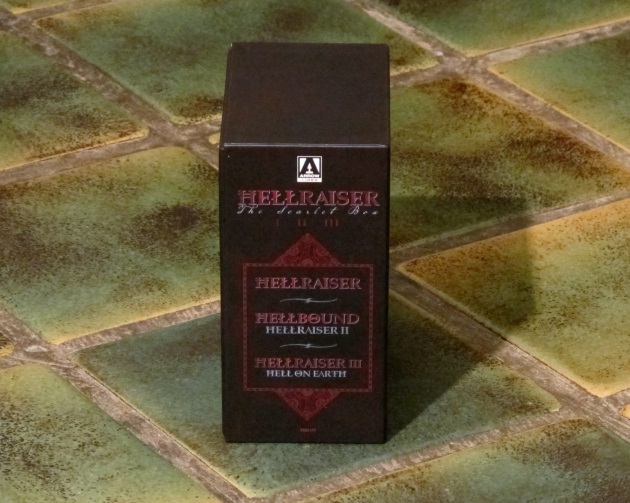 Here's a closer look at the spine (a sentence which could have come straight out of the movie itself). 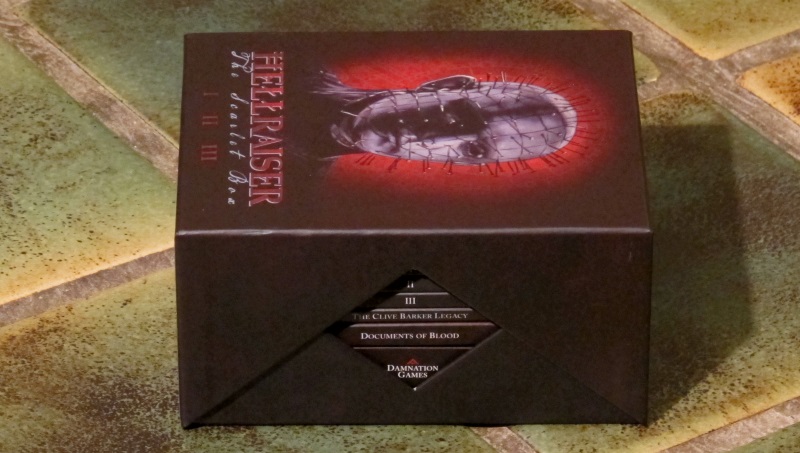 A geometric hole in the side provides an early peek at the stacked innards (which, again, is a sentence which could have come straight out of the movie itself...). 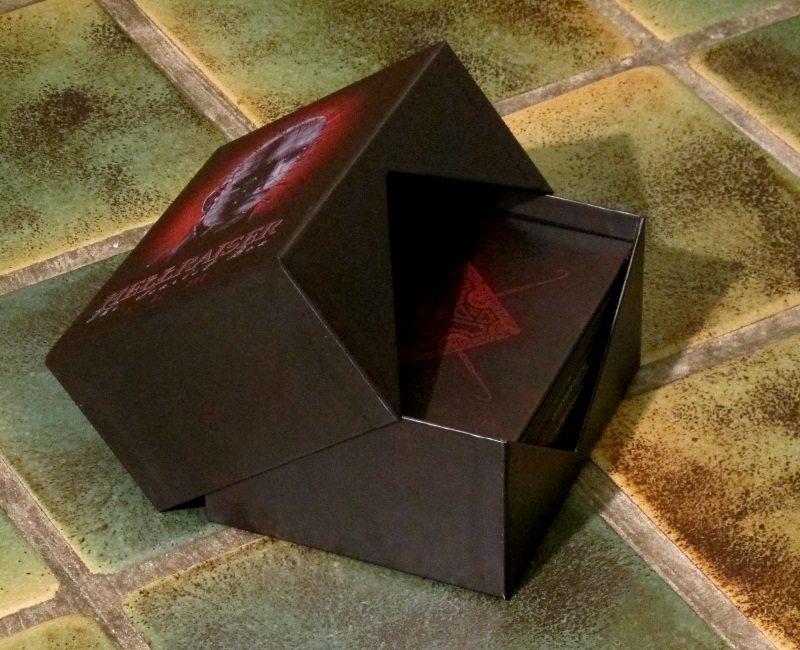 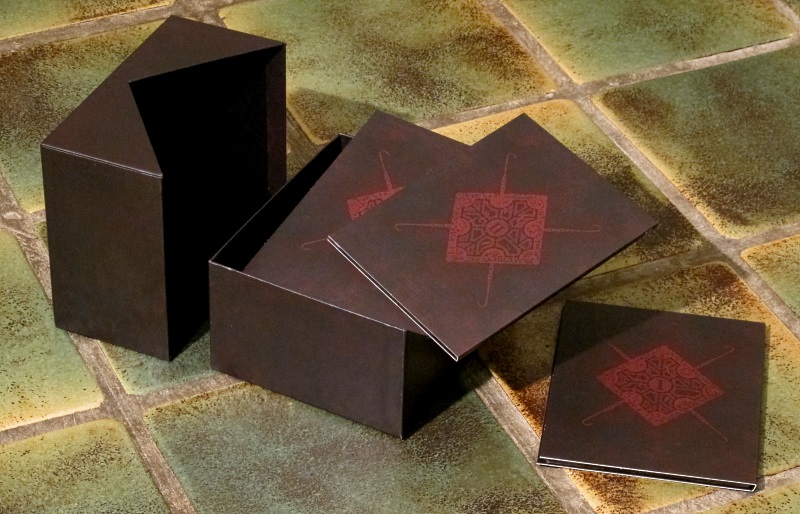 Inside are a stack of digipaks, a folder, and a hardcover booklet. 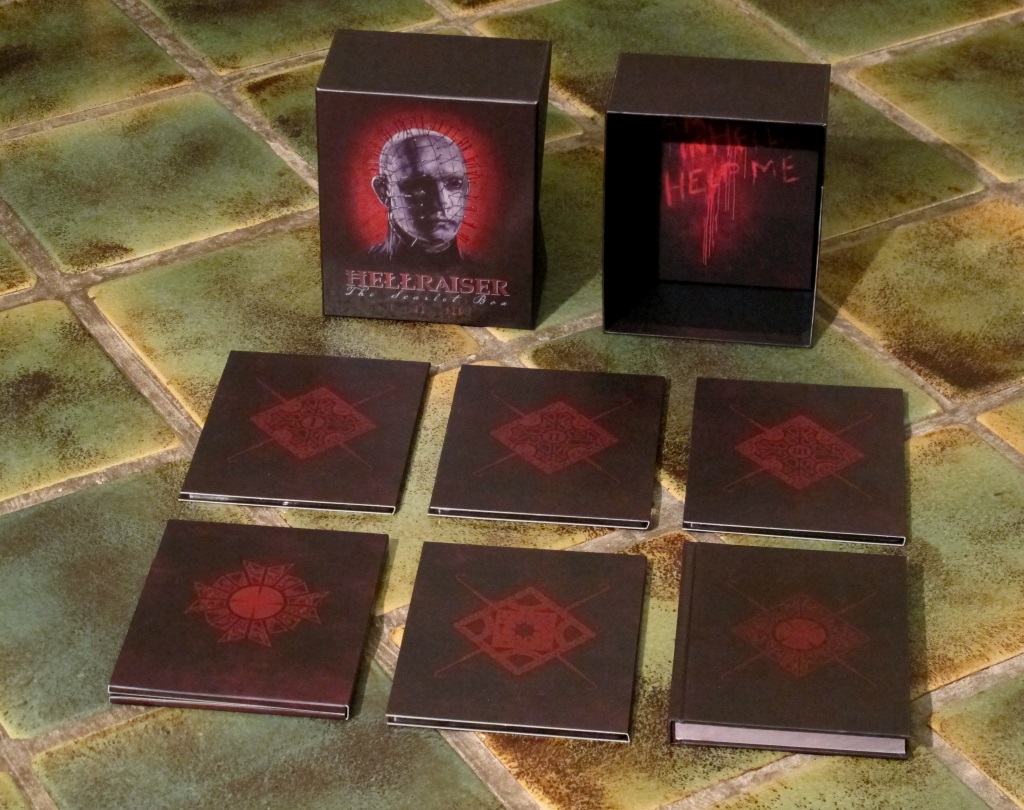 The contents laid out.

There are four digipaks: one for each Hellraiser film and one with extras, which includes early short films by Clive Barker and documentaries. The folder contains the art cards, the poster, and the pitch-booklet (more about that later). 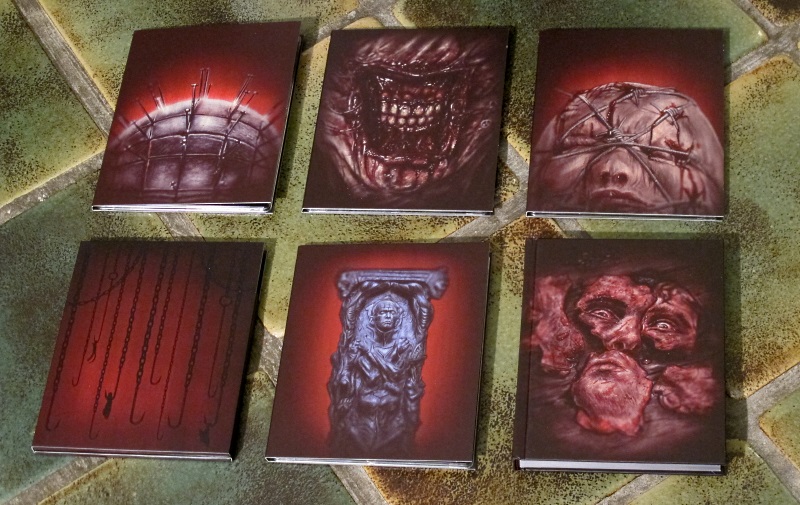 All of these items have reverse sides with great artwork by Gilles Vranckx. Here is a look at them! 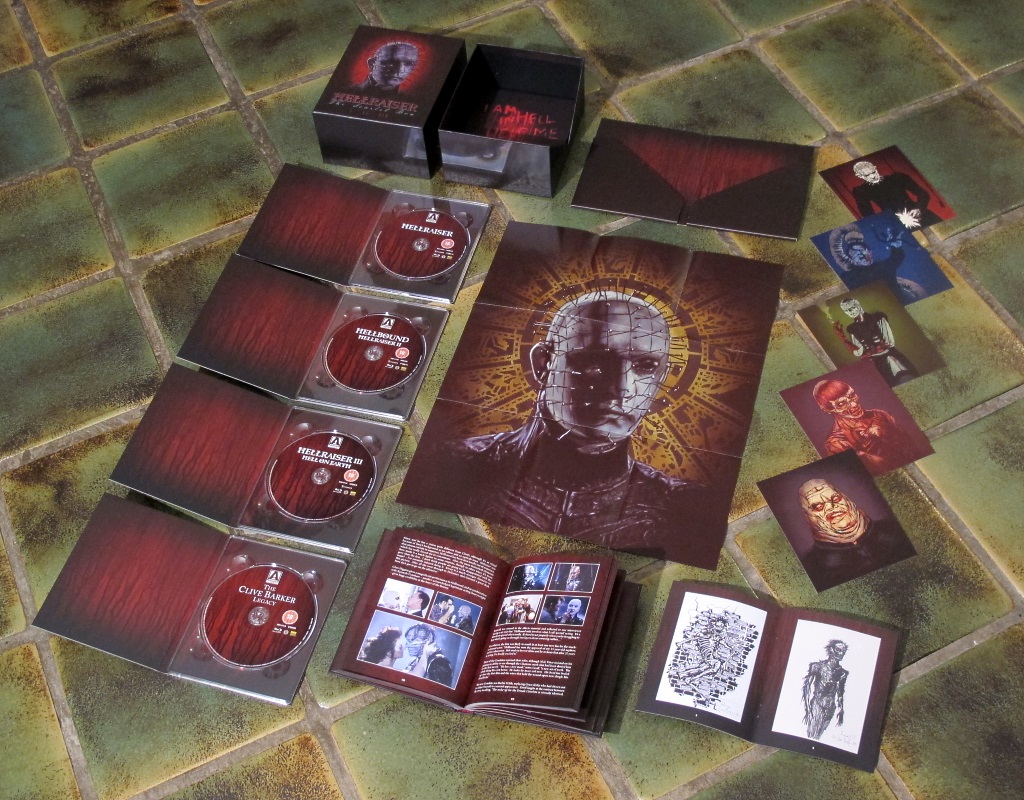 All contents opened. The poster also has a reverse side, which features the art on the front of the boxset. 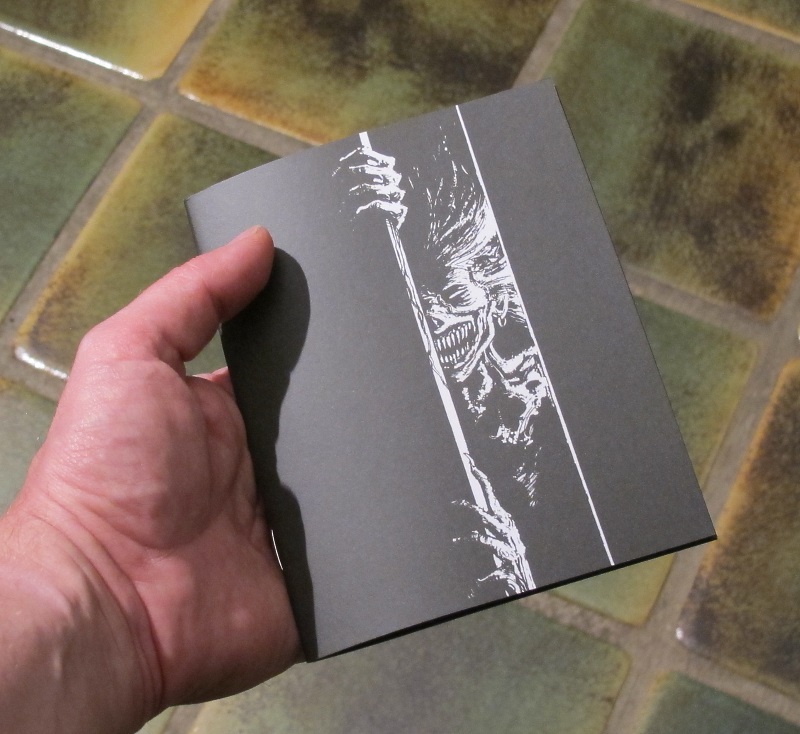 This is a small (20 page) booklet, showing some of the designs Clive Barker used to pitch Hellraiser. 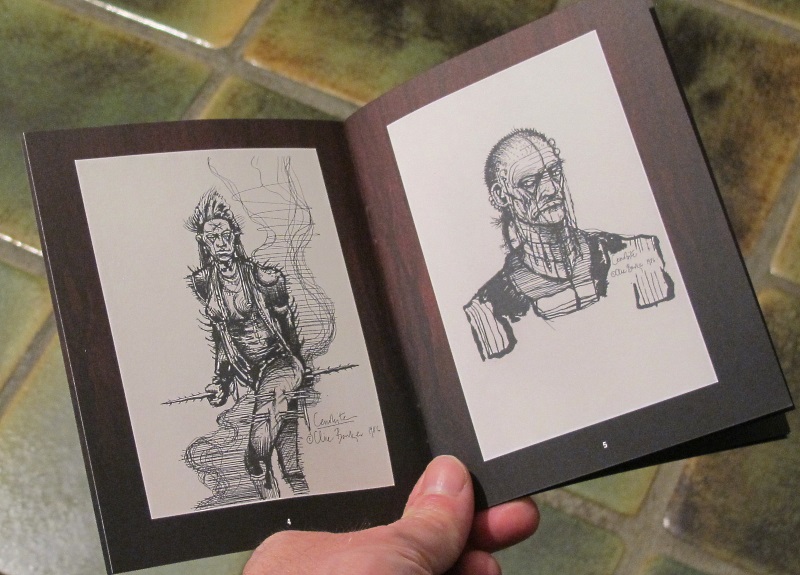 Small it may be, but these early sketches look great! 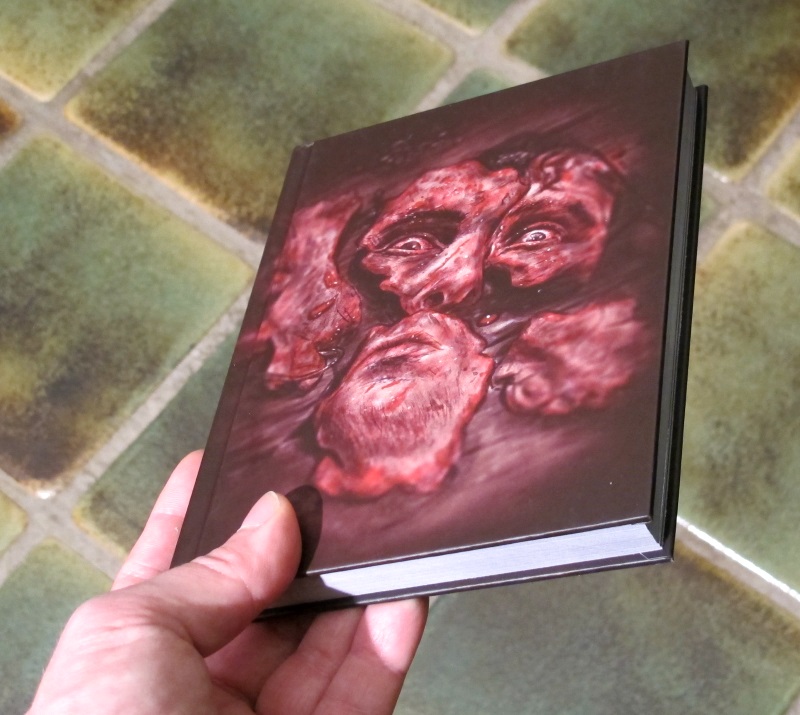 Book-wise, the real meat is with the hardcover booklet. "Booklet" is probably a misnomer though, as this pocket has 200 pages in it. 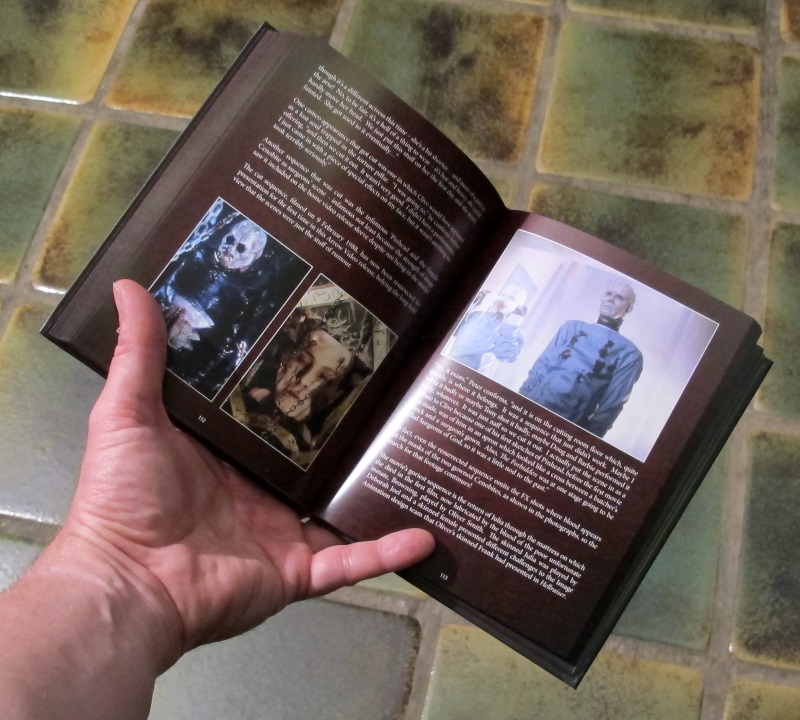 Inside, there are articles and essays by Barker archivists Phil and Sarah Stokes. Clive Barker's early work is explained, you get a making-of of each of the three films, their reception and influence is discussed, and the whole thing is adorned with loads of photographs and drawings.

In short: this is one hell of a booklet. Shown here is the page where the infamous "surgeon scene" gets explained: why it was cut, then lost, then found again (and actually included in this set as an on-disc extra). 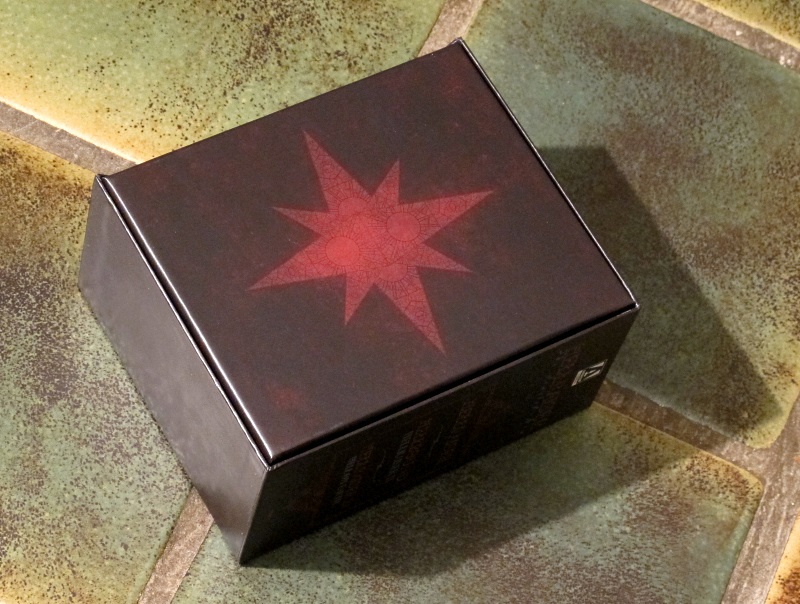 The end. Well, unless blood is spilled on it.