New THE HATEFUL EIGHT Trailer Features Brutality In The West 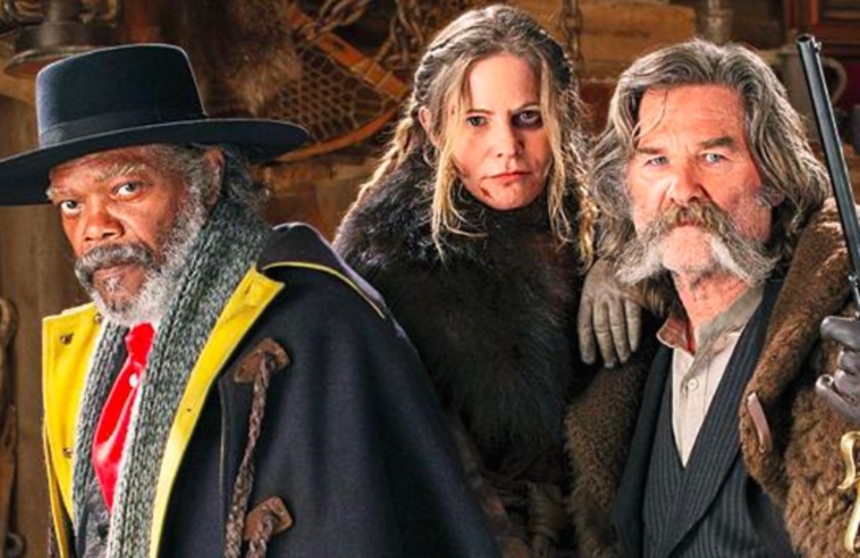 Quentin Tarantino protested police brutality recently, and his words have gotten him in hot water with police groups in the U.S. nationwide. The director has been unapologetic in his latest response, leading to a verbal standoff amidst calls for a boycott of his latest film.

On the heels of all that comes a new trailer for The Hateful Eight, which continues to remind me of the setup for Dragon Inn, with eight combustible people confined in a small place during rough weather conditions. Kurt Russell, Samuel L. Jackson, and Jennifer Jason Leigh star, though the lady doesn't get much screen trailer in a new trailer, what with all the men-folk stomping and snorting and spitting out dialogue.

You can watch the trailer below. The movie opens in 70mm in select theaters in the U.S. on December 25 before going wide on January 8, 2016.

Do you feel this content is inappropriate or infringes upon your rights? Click here to report it, or see our DMCA policy.
Jennifer Jason LeighKurt RussellQuentin TarantinoSamuel L. JacksonWalton GogginsCrimeDramaMystery

I'm not really sold based on this trailer (or the earlier one), but Tarantino hasn't made any mediocre movie in his filmmaking career so far, so here's hoping that this is just a bad case of advertising that's aimed for a broader audience and that the actual movie is another great Tarantino masterpiece.

Tarantino is a deluded cunt for joining the left's regressive racial demagoguery and attacking police.

But as much as I hate what he has said nothing will keep me from seeing this.

A deluded cunt for saying that shooting unarmed people is murder? Because that's what he actually said. And he is factually correct. Who's swallowed the racial demagoguery here?

Yeah, I'm right there with you. Then again, I wasn't sold on Inglorious Basterds and I ended up loving the hell out of that flick. Bottom line: I'm not a hater and I've enjoyed every single one of his films.

You are an idiot, and you watch too much Fox News. If you really hate what he said, don't be a pussy and stand by your convictions. Join the police --- they're union Prez only yesterday threatened Tarantino like a mobster would --- and stay away.

Who do you think will miss you?

I think it's apparent who the cunt is here.

I have paid $ 8569 this month.I'm finally getting 97 Dollars p/h,....It's time to take some action and you can join it too.It is simple,dedicated and easy way to get rich.Three weeks from now you will wish you have started today....

Jackie Brown might not be considered as a masterpiece like "Pulp Fiction" or "Reservoir Dogs" is, but I think it's a pretty solid film on it's own, which forms a perfect trilogy with Tarantino's earlier two flicks.

I would say Death Proof (especially the "unrated version") is his absolute worst.