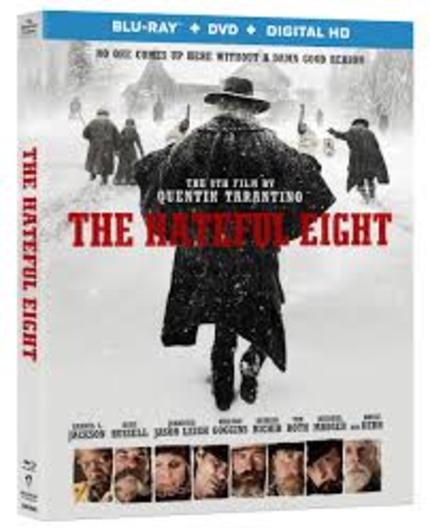 After a fairly successful theatrical experiment over the holidays, Quentin Tarantino's The Hateful Eight lands on Blu-ray this week, but does the film hold up at home? Well, yes and no.

As is the case with any new film from Mr. Tarantino, there was a lot of hubbub surrounding the theatrical release of The Hateful Eight. This snowbound Western tale of distust and deceit was a bit of a test for Tarantino in terms of how far he could push his distributors and exhibitors by sheer willpower to do what he wanted. What Tarantino demanded was an exclusive rollout for his new film in 70mm to cities around the country, a full week before it was released on the standard 35mm and DCP digital projection formats. For a while there, the commotion of the method of the release got much louder than any real criticism of the actual film.

I was among those who ended up doling out the extra cash to view the film in its initial 70mm rollout, not because I was particularly committed to the experience of this unusual format, more because it fit my schedule. While I was dubious at first about whether it was worthwhile, I ended up enjoying the film quite a bit for reasons that -- it seemed at the time -- had nothing to do with the actual projection.

Fast forward to this home video release and I'm starting to question my own memories and how much my enjoyment truly owed to the theatrical experience. Having now watched the film a second time, I found myself distinctly underwhelmed on my own modest (when compared to a cinema) home video set up. It looks fine, but it certainly lacks the punch of the full projected experience that I had in the theater on that cold December afternoon.

Our own Jim Tudor reviewed the film at the time of the release and he said:

While by no means his best movie, The Hateful Eight more than satisfies any nagging itch for new work from this uniquely recognizable voice.

Even on a second viewing, I'd have to say that is an accurate assessment. It is not Tarantino's finest work. To be honest, much of the embellishment that surrounds the film in terms of its rollout seems more self-indulgent than artistic. However, it's fun, and it'll certainly sate my desire for Tarantino until he gets around to making his next film.

The first question on most people's minds regarding this home video release of The Hateful Eight is that of which version of the film we get. The Blu-ray release is of the wide release version of the film, clocking in at a not-too-shabby two hours and forty-eight minutes. The 70mm roadshow edition was always advertised as something that was only going to be seen in theaters, in Tarantino's own words:

You’ve paid the money. You’ve bought your ticket. So you’re there. I’ve got you. But I actually changed the cutting slightly for a couple of the multiplex scenes because it’s not that. Now it’s on Showtime Extreme. You’re watching it on TV and you just kind of want to watch a movie on your couch. Or you’re at Hot Dog on a Stick and you just want to catch a movie.

Now, there's no guarantee that the film won't get rereleased in the road show edition somewhere down the line, but for now, this is what you get.

As I mentioned above, the film looks great on Blu-ray, but there is some depth lacking in the way the Blu-ray renders the image. It it by no means a bad visual presentation, and I hate to be the guy saying things like this, but the 70mm film print definitely had additional detail, especially in the shadow areas when compared to this presentation. That being said, I really cannot identify faults on the disc, just a general sense of being underwhelmed. The audio, on the other hand, is fantastic, especially Ennio Morricone's score. There arent' a ton of whizz-bang audio flourishes in the film, but the dialogue, effects, and score are pristine, which is a definite plus.

In terms of extras, the disc definitely disappoints with a paltry eleven minutes of bonus material overall. There is a four minute "making of" featurette, which is basically an EPK (electronic press kit) that give the viewer a few canned interviews from the cast. The other extra is a seven minute explanation of the 70mm Super Panavision process used to shoot the film. This second extra is more substantial, but at seven minutes, it is also pretty disappointing.

In conclusion, if you enjoyed the film or the work of Tarantino in general, you're going to buy this no matter what I say. However, if you're interested in the Road Show version or a comprehensive look at the film and the way it came together, you can probably give this disc a pass.


Jim Tudor contributed to this story.