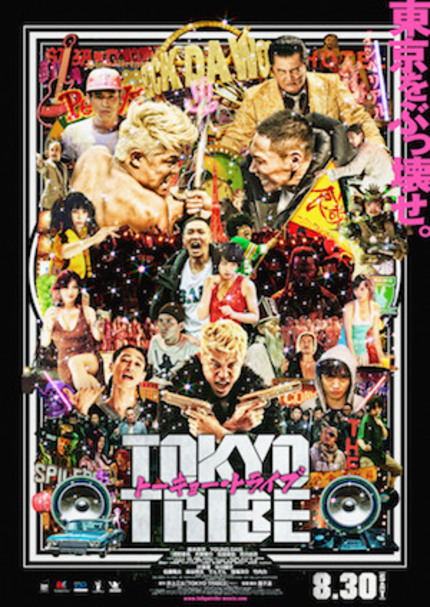 Before releasing the crazy amount of six films in only one year, master filmmaker Sono Sion adapted the manga Tokyo Tribes into a unique and fun hip hop musical about several rival gangs (all but one very violent) that are about to unite in order to defend themselves from a greater evil.

Since XLrator Media finally released Tokyo Tribe in North America on October 23 (in cinemas and on VOD and iTunes), I had to chance to interview Sono via e-mail. Here's what the wild Japanese director told us.

ScreenAnarchy: How was your first approach to the original comic book, and when did you decide to make a film adaptation?

Sono Sion: I still do not why but the producer brought me this project one night. And at that time, I was in a good mood drinking, so I accepted the offer right away.

TOKYO TRIBE has been compared to such films as Walter Hill's THE WARRIORS and WEST SIDE STORY. Which were your biggest film and music influences for it?

Both films are masterpieces, but actually the one that was in my mind was Absolute Beginners by Julien Temple. There might be some other films that influenced me but cannot remember.

How much were you involved in the creation of the soundtrack?

Very much. But I didn't touch the lyrics or composing as I counted on the rappers. Mostly I was checking the lyrics to follow the story. It's a musical so I was very careful about the lyrics lines and the atmosphere of the music so that it can fit the scenes.

Each tribe has a different style, do you have a favorite?

"NERI-MOTHA FUCKERZ" is like a real manga character, crazy and very interesting. So the Shinjuku guys are. But I don't have a particular favorite one.

With WHY DON'T YOU PLAY IN HELL, some reviewers thought it was derived from KILL BILL. This is why you clarify here that the yellow suit is Bruce Lee's and not Tarantino's?

TOKYO TRIBE shows union between the tribes and reveals the absurd origin of the main feud (between Merra and Kai). How do you manage to combine very violent moments with funny/over-the-top material and make it work as a whole?

I didn't want Tokyo Tribe to be something like Crows Zero or Rookies. Though they wear different clothes, the concept is pretty much the same: about friendship. Thus I decided not to highlight the "friendship" in the film.

Even if it's a hip hop musical based on source material, TOKYO TRIBE is pure Sono Sion in many ways. There's stuff about religion with the Highest Priest character, martial arts experts, upskirt shots (when Erika fights). Which is the element that differs the most from the comic?

Of course the elements like a hip-hop/rap musical, is a quite big difference, but the biggest is that we actually built up whole fake Tokyo city as the set and there's no real Tokyo in the film. Maybe only 10 seconds.

That was my idea of making up a fake Tokyo city as I wasn't interested in using the real location in the city. One of the things that influenced me was Escape From New York, as I wanted to make up a whole fake world.

Do you feel this content is inappropriate or infringes upon your rights? Click here to report it, or see our DMCA policy.
Japansion sonosono siontokyo tribe