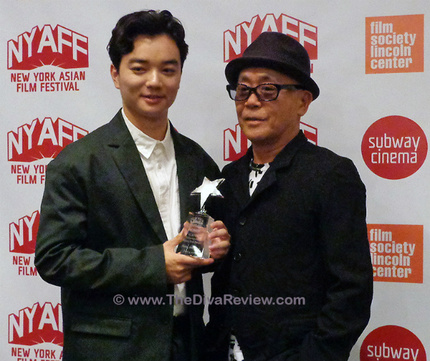 They grow up so fast. In 2009, I had the great pleasure of interviewing the then-rising teen star, Sometani Shota, on the verge of his first film of what would be a fruitful collaboration with maverick director, Sono Sion. Returning to New York with Director Hiroki Ryūichi for the ensemble, Kabukicho Love Hotel, Sometani chatted with me about spitting rhymes for Sono's hip-hop musical, Tokyo Tribe, and the start of his own directing career.


The Lady Miz Diva:  Director Hiroki, Toru is very much the anchor of KABUKICHO LOVE HOTEL.  All the action happens around him.  What made you believe that Sometani Shota was the correct choice to play this role?

Hiroki Ryūichi:  I would say that because Mr. Sometani was in this film, that this film was realized. Without him, it would have been impossible. That's how valuable he was, and he really helped me.

LMD:  With a story featuring so many different characters played by so many wonderful actors, how did you decide how much time to focus on a specific one?

HR:  So, really, we shot for two weeks, and at that time, we couldn't even sleep or anything like that, but I had to match and adjust according to each actor's schedules and work that way.

LMD:  Would you please tell us about working with Lee Eun-woo, who was at the festival last year.  She is luminous in your film as the Korean call girl, Heya.

HR:  She is indeed a wonderful actress, and I would ask her to do many takes because she was just so wonderful.  And for the bath scene, especially, that was a long take, but she could get that in one take.  Before we began shooting, I asked her to research the role, and she would actually go and talk to call girls - or delivery girls, as we call them in Japan - and she actually researched the role that way.  I also asked her to live in Shin Okubo for a while, the Korean town in Shinjuku, Japan, so that she would have a sense of the town.

LMD:   You began your film career in in Pinku-eiga.  I wondered if the way that you depict the sex workers in this film, reflect your days in that industry?

LMD:  This is not the first film you've made that was centered around sexuality. Is important to you to hold a mirror up to society or initiate discussion about attitudes toward sexuality?

HR:  I'm not sure. {Laughs.} Well, what I feel is that you need the psychological and the physical, and I think it is my mission to depict both aspects of the human experience.

LMD:  Shota-san, when we spoke in 2009, you hadn't yet made HIMIZU.  Now, all these years later, you seem to be one of Director Sono's favorite actors, appearing in many of his projects.  Can you explain what it is about his direction that makes you want to keep collaborating with him?

Shota Sometani:  He's so crazy that I like him. {Laughs.} He's so extraordinary and unexpected, you're constantly threatened, as if he's going to break down the film, but that is what's amazing about his direction.

LMD:  Last year, your HIMIZU costar, Nikaido Fumi was here at the Festival for WHY DON'T YOU PLAY IN HELL.  She said she believed Sono is someone with a lot of love and humanity. Do you agree with that assessment?

LMD:  The other film of yours showing here is Sono's TOKYO TRIBE, which is a hip-hop musical.  What was it like for you to do all the sung dialog, and was it always planned that you would be the film's narrator, as opposed to one of the main characters?

SS:  Yes, it was already decided that I would be narrating the whole thing.  Sono-san approached me and asked me, "Do you want to be in TOKYO TRIBE," and I said yes, and I was quite startled to know that that was the role; the narrator, the MC, with no dialogue, whatsoever.  So I wondered, I mean, shouldn't a pro rapper do this role?  But I felt his love, so I had to take it on.

LMD:  To prepare for the role in TOKYO TRIBE, did you have to research or listen to a lot of hip-hop records?

SS:  I've always loved hip-hop, so I listened to it. And I have friends who are rappers, so they taught me.

LMD:  Does that mean there'll be a MC Shota mix tape, soon?

LMD:   At 22 years old, you have worked with many of the premiere directors of Japan.  I recall when we spoke in 2009, you were very observant of your directors' approach, and by now you probably know more than many filmmakers just through observation.  Has working with directors like Hiroki-san, Seta {Natsuki}-san and Sono-san, inspired you to want to make your own film?

SS:  Actually, I am making a film. SIMILAR, BUT DIFFERENT, that's the title of the short film that I did.  It got a one day screening in Japan, but that's what I worked on.  Next year, I'll shoot another one.

LMD:  Is there any way we can see the short film in the US?

SS:  No, I don't think so.  Not right now; there's no plan for that.  Can you talk to Japan Society for me a little bit? {Laughs}

LMD:   I know congratulations are in order; you are recently married to the wonderful Rinko Kikuchi.

LMD:   She has become successful both in front of and behind the camera of Western
productions.  Has she inspired you to expand to more international projects?

SS:  I don't know if inspiration is the word, but I want to continue doing what I do and put in as much effort as I can in doing and continue on the same way, and I hope that she supports me in that.

LMD:  Are you interested in being involved in Western productions?

SS:  Sure.  I don't see working in international production as an end goal, but in a way, I would consider that as an option; as something I would consider along the way in working hard towards my career.

SS:  I'm basically on a freelance basis, I have to be hired to have a job, so it's hard to turn down work. {Laughs} It just so happens that I got a series of very appealing jobs and projects.

LMD:  Is it simply a matter of not wishing to turn down work that is offered, or is it the quality of what is offered is so irresistible you can't bear to turn it down?

SS:  I don't feel that I constantly need to be working.  And of course if I have time, I want to do my own projects, as well.

LMD:  You've been in a wide variety of films through your career; contemporary dramas, historicals, comedies, romances, horror, sci-fi.  Is there a particular genre you enjoy most, or one you would like to explore more?

SS:  I think I've done all of them, right?  Well, what I do look forward to, is that as I get older, the variety of roles that are offered to me expands, as well.  So, the roles that I couldn't do when I was younger open up to me.  For instance, the character of a yakuza; I'd love to try that on.

LMD:  I'm afraid to ask Shota, but what is next for you both?

HR:  For me, I have no project planned as of yet.

SS:  I have a film planned for the end of the year and I'm actually in training.  I can't divulge any information yet, but I will say that I'm training for it.  And the film that I shot myself, it's being edited right now and I believe it will stream online, so hopefully you will be able to see it in the States, as well.

Do you feel this content is inappropriate or infringes upon your rights? Click here to report it, or see our DMCA policy.
Hiroki RyūichiJapanese CinemaKabukicho Love HotelNYAFF 2015Sometani ShotaTokyo Tribe