Destroy All Monsters: The James Bond Continuity Vortex Is Why You're Wrong About SPECTRE 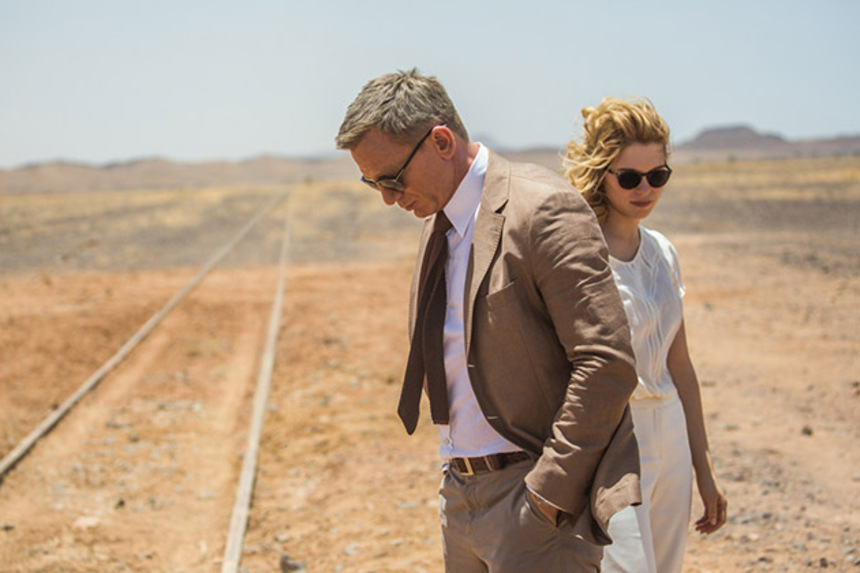 "I've been here before" is the first line in Sam Smith's execrable title track for the latest James Bond movie, Spectre. (Read the ScreenAnarchy review by Ard Vijn right here.) To a widely observed extent, that line could be the précis for the whole film.

Spectre clones memorable beats from dozens of previous Bond movies, from the mountaintop health spa / downhill chase of On Her Majesty's Secret Service to, of course, the train fight in From Russia With Love. (The film also opens with an extended gloss on some of the imagery from Live And Let Die, director Sam Mendes' favourite Bond picture, but let's call that more of a love letter than an outright retread.)

And, in an effort that seems to be driving several critics of the film absolutely banunus, Spectre also uses the wedge of Blofeld's return to the franchise proper as an opportunity to knit a complex retcon together, which ties Christoph Waltz's baddie to every single thing that has happened to Daniel Craig's incarnation of the super-agent thus far.

The film's handling of this "franchise continuity issue" seems to be driving some fans, and critics, completely out of their minds. It's been described as the Marvel Cinematic Universe-ification of the Bond franchise, the need to connect every thing to every other thing. The move has also been hotly accused of ruining the previous entries in the series in retrospect. (Because, I dunno, we were all really jazzed by the idea of Quantum as a stand-alone terrorist organization with no ties to SPECTRE? Because we weren't shitting all over Skyfall for suggesting that Silva did all of that without any help?)

I can see what's going on here, and I can't really blame the respondents. They are gauging Spectre as a link in an ongoing story, judging it against its peers in effect, as one generally does with sequels, prequels, reboots, and reborquels.

Even a passing familiarity with the James Bond franchise should be enough to tell you that this approach is totally, fundamentally, categorically wrong.

Again, I can't blame the wrongheaded in this. Spectre, in its very storytelling, is posing as exactly what I've described: a link in an ongoing story; a sequel. And judging it as such is certainly fair game.

I've been watching Bond movies since I was too young for it to be appropriate, and I can tell you with some degree of certainty: the best way to enjoy any Bond film, ever, is to watch it entirely on its own terms as a single, distinct entry, in a "series" whose laws of continuity have more in common with The Simpsons than the Marvel Cinematic Universe.

Contemplate this: the Daniel Craig movies have served as "reboot" of the franchise, starting off with Bond as a new agent on his first adventure, having just achieved double-O status. His boss is M, played by Judi Dench, who is a seasoned head of MI6 and has held the post for some while.

Now: the Pierce Brosnan movies served as a "soft reboot" of the franchise, starting off with Bond as an experienced agent on yet another adventure. His new boss is M, played by Judi Dench, in an in-continuity change of command at MI6 that both Bond and M discuss at length.

Let's keep it going: in You Only Live Twice, Bond meets and foils Blofeld. Blofeld has a scarred eye and a pussy cat. In On Her Majesty's Secret Service, the next film in the series, Bond meets and foils Blofeld - Bond knows Blofeld, but Blofeld does not know Bond. Blofeld is in perfect physical shape, with two working eyes (still has the pussy cat).

Empire Magazine had a theory that in the rebooted Daniel Craig continuity, the entire preceding 20 Bond films, take place between Quantum of Solace and Skyfall - which doesn't make a lick of sense, of course, but makes about as much sense anything else in this legendarium.

At best, we can filter overall continuity by each actor's tenure, but even that doesn't work for the Connery-Lazenby-Connery switchback; and it certainly doesn't work if you look around at anyone else around Bond, given Miss Moneypenny's aging through the end of the Moore years, or the almost gleefully perpetual re-casting of Felix Leiter.

It certainly doesn't work if you watch the strictly-by-the-books linearity of M, against the non-linearity of each M's agent 007. (M, or rather M's position in MI6, is the only truly continuous aspect of this entire series. It's the only aspect where, within the canon of the movies, each section chief has been succeeded by the subsequent actor, in diegetic continuity.)

So please, say it with me: the continuity of the Bond franchise does not make any sense, and it hasn't in living memory. People have literally died since the last time this series was even attempting to tell a continuous, interrelated story.

As such, in spite of Spectre making very serious and significant continuity elements a primary aspect of its plot, continuity is never an available stanchion of strength in a Bond movie, because it simply can't be. The way the franchise has unfolded, in at least everything since the initial Connery years, denies this possibility.

The only way to enjoy any Bond movie is on its own terms, only: what the film, itself, is doing, with whatever elements it is choosing to do them with. Each film is its own soufflé, brought out of the oven every two or three years by those whackos at Eon Productions; and while devouring it, there is no value whatsoever in thinking about any of the preceding soufflés.

I assure you that under those terms, Spectre is dandy, even as it fools around with Blofeld and Quantum and SPECTRE and a bunch of other table stakes that the past ten years of the franchise have brought into play.

This, perhaps, is the best way to describe a Bond film: a stand-alone entity that has a vast library of pre-existing characters, images, scenarios, and beats upon which to riff, as dictated by the particular whims of the creative team at the time.

Per Sam Smith, "I've been here before," and for these movies, that's exactly the point. The fun is in, like a new production of Macbeth, watching how the filmmakers will assemble and reassign the available elements, to great or ignominious effect. (I'm looking at you, Die Another Day.)

And as such, as far as I'm concerned, whatever the filmmakers want to do with those pieces is fair play. If they want to make Blofeld Bond's long-lost adoptive brother, single-handedly repsonsible for all the acts of terror of the last four films combine, so be it. But there's a good-news corollary to that: if the next team of filmmakers want to say that the entire events of Spectre were a martini-fueled bad dream, that's going to be fair play too.

Watch what this film, Spectre, is doing, and then argue about whether the writing shenanigans around Bond's past are justified by the outcome. Like the other Craig films, Spectre is largely about Bond as a person, and what his job has done to him; this theme has moved from text to subtext and back again throughout the refreshed run of the series, but it's always a part of it - which is in line with Fleming, if you want to be all old-school about things.

But Spectre, like the Fleming novels, is an airplane page-turner with the best of them, something to be pulled off the shelf on a warm summer night and consumed solo, not as part of some godforsaken binge-watching spree, scheduled between your re-watch of The Hunger Games Quadrilogy and a day-and-date consumption of Netflix's Jessica Jones.

Like Quantum of Solace before it, once Spectre drifts away from all the assumptions and agendas that fans and critics are bringing to it as a follow-up to Skyfall, it will serve just fine as another solid entry in cinema's unstoppable franchise. The writing is, indeed, on the wall.