Now On Blu-ray: ALLELUIA, The Jealousy That Kills 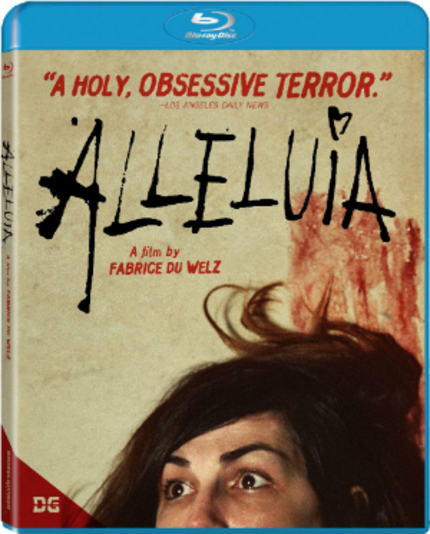 Gloria is sad and lonely. But she has a sprightly young daughter, as well as a friend who knows what she needs: a blind date, arranged through the internet.

Reluctantly, Gloria goes on the date and is pleasantly surprised to meet Michel, a handsome, well-dressed, well-spoken man who sweeps her off her feet and into bed. Has she found the man of her dreams? A warning bell sounds the next morning, when he speaks about a pressing financial need. Still glowing from the night before, Gloria happily volunteers a large sum of cash, but is soon crushed when Michel disappears.

Here is where Alleluia begins to diverge from the expected. Refusing to give in to her naturally depressive state, Gloria hunts down Michel. What she does from there frames and envelops the film, which sweeps toward its conclusion with the the inevitability of a classic noir and the frank, disturbing sexuality of a modern thriller.

Our own Shelagh Rowan-Legg saw the film during the Sitges Film Festival in August 2014 and began her review thusly:

The madness and obsession of love is a recurring theme in Fabrice de Welz's first two films Calvaire and Vinyan, and his latest, Alleluia, continues this trend.

Taking on the infamous tale of the Honeymoon Killers (an American couple who conned and murdered several older women in the mid-20th century), with stellar performances by Laurent Lucas and especially Lola Dueñas, Alleluia is a fire-charged thriller than spins a disturbing and all-too-believable web of such madness, jealousy, sex and murder.

She concluded: "While it might be relegated to midnight or extreme cinema slots, Alleluia is (despite its graphic violence) a psychological thriller, and its basis in a true story renders it all the more horrifying. With its twist on the story through the mixture of internet dating and apparent witchcraft, it explores how easily our masks of normality can slip away to reveal the dark side of love underneath."

You can read her entire, captivating review right here.

Now on Blu-ray and DVD from Doppelganger Releasing, the film retains its power on home video. Even on a small screen, the beauty of Manual Dacosse's photography is a glory to behold, smoky and jagged and disturbing. I saw the film at Fantastic Fest about a year ago, and my second viewing this week was even more unsettling, not only because I'd forgotten some of the more unexpected moments, but because the visuals work so well in compelement to the merciless story and the outstanding lead performances.

The well-timed English subtitles are white and outlined in black, making them easy to read. The film is presented in its original aspect ratio: 2.35:1, and in its original language (French), in 5.1 DTS-HD.

-- Audio commentary by director Fabrice du Welz. Oddly enough, du Welz speaks in English, for some reason, overdubbed on top of the original language audio from the film, which makes it not so easy to hear. In short order, du Welz admits he's only doing the commentary because his producer wants him to do so, and then embarks on a side-trip that's more of a long, absorbing critical analysis. I still wish he had been allowed to speak in his native language.

-- A Wonderful Love, a short film by Fabrice du Welz. The 22-minute short dates back to 1999, about five years before du Welz made Calvaire. Jolting, raw, and darkly comic, it revolves around a woman and her, uh, unusual taste in men.

-- Home Cinema Episode. The first segment of the 28-minute show features du Welz interviewing fellow Belgian director Jaco Van Dormael, who had just finished filming The Brand New Testament at the time. That film received strong reviews when it screened recently at Fantastic Fest. The fascinating interview covers Van Dormael's career. The second segment is a promotional vehicle for Alleluia, including interviews with du Welz, Lucas, Duenas, and a journalist who puts the movie into context. The third segment returns to the interview with Van Dormael.

-- Shooting Alleluia. (10:33). Evidently first presented on a Belgian show, this includes behind the scenes footage and an interview with du Welz. Among other things, the director, who worked with actor Laurent Lucas on his first film, Calvaire, expresses his desire to make a third, concluding chapter with him. The segment also features an interview with Lucas.

-- Cut Scenes. 17 minutes of deleted footage, including short scenes in their entirety as well as excerpts from scenes in the film, offered without commentary: nightclub dancing; a nighttime scene in a bedroom; leasing a room; a monologue, with audible directions to the actor by du Welz; an alternate take; an encounter in a field; a "walk away" scene. From watching these scenes, it's clear that du Welz wanted to boil the film down to its essence.

-- Setting the Scene. (Two and a half minutes.) Production designer Manu de Meulemeester shares pre-production sketches and talks about what was shot on location and in the studio.

-- Interviews with the Actors. Lola Duenas (4 minutes, video), Laurent Lucas (5 minutes, audio only, illustrated with behind-the-scenes-photos), and Helena Noguerra (6 minutes, video). Standard-issue EPK-style interviews, but fascinating if you really like the film, as I do.

-- Trailers for Alleluia, the excellent Black Out, Penance, and The Returned.

-- Also included is a 20-page booklet, with articles on the so-called Honeymoon Killers, another interview with du Welz, and essays by Drew Hunt and Scott Tobias.

On second viewing, I was amazed that Alleluia accomplished so much in such an efficient running time (93 minutes). The movie packs a persuasive punch, and this is a very good presentation.

Do you feel this content is inappropriate or infringes upon your rights? Click here to report it, or see our DMCA policy.
BelgiumFabrice du WelzLaurent LucasLola Duenas