Review: ALLELUIA, The Horrifying Twist Of A True Story 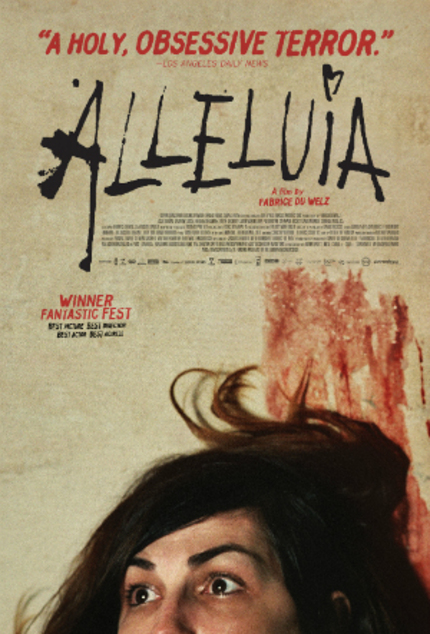 The madness and obsession of love is a recurring theme in Fabrice de Welz's first two films Calvaire and Vinyan, and his latest, Alleluia, continues this trend.
Taking on the infamous tale of the Honeymoon Killers (an American couple who conned and murdered several older women in the mid-20th century), with stellar performances by Laurent Lucas and especially Lola Dueñas, Alleluia is a fire-charged thriller than spins a disturbing and all-too-believable web of such madness, jealousy, sex and murder.

Gloria (Dueñas) is a lonely single mother working at a hospital somewhere in Belgium. A friend signs her up for a singles website, and Gloria arranges a date with Michel (Lucas), a shoe salesman. But Michel is a also a con artist who bilks lonely women of their hard-earned cash, and he believes he accomplishes this through a strange witchcraft. And while he is able to seduce and con Gloria, his 'magic' works perhaps a little too well. He reveals to her his secret life, and she decides to help him. She abandons her child, and the two begin their journey of money and murder, with Gloria's increasing jealousy threatening them at every turn.

Du Welz and cinematographer Manuel Dacosse achieve representation of the murderous madness both by shooting the film with a grainy texture and using off-kilter angles, frequent handheld camera close-ups that force both partial and direct engagement with the characters. The look and shots may seem erratic, but there is method in it, casting the spectator in the role of the film's conscious, stuck inside the insanity of the situation, unable to effect change. The grainy look gives an almost home movie feel, suggesting a surreal intimacy and almost complicity in the couple's actions.

As de Welz has shown in his previous work, he does not let his characters get away with anything; while not unsympathetic to them, he does away with unnecessary exposition, concentrating on the decent into madness, which is far more compelling. All we know of Gloria in the beginning is her status as a lonely single mother; this brief access to her vulnerability renders her insanity far more disturbing. Michel might be a witchy charmer, but Lucas reveals his layers of weakness with each scene, revealing a turning of the tables of control that he slowly relinquishes.

Lucas' strong work as an unhinged man increasingly subjected to forces beyond his control has been demonstrated in du Welz's previous films, and he brings that again to this role. But the film really belongs to Dueñas; her rendering of Gloria's transformation from kind and gentle to complicit accomplice and jealous murdered is both swift and believable. In one scene, she is in a rage as she kills one of her and Michel's con targets; the next, she sings as she disposes of the corpse. This seeming dichotomy, from jealous lover to skilled criminal, leaves Michel at her mercy.

There is no pretense of the beauty of love in Alleluia. Du Welz and co-writer Romain Protat are clearly on the side of extremely black comedy that makes the audience cringe as much as laugh. The film doesn't shy away from the darkness, nor does it relish in it. The violence is poetically crude and raw, its gruesome nature intensified by the matter-of-fact attitude and practicality of the characters that belies their obsessive neediness (Gloria for Michel, Michel for attention).

While it might be relegated to midnight or extreme cinema slots, Alleluia is (despite its graphic violence) a psychological thriller, and its basis in a true story renders it all the more horrifying. With its twist on the story through the mixture of internet dating and apparent witchcraft, it explores how easily our masks of normality can slip away to reveal the dark side of love underneath.
Review originally published during FrightFest in August 2014. The film opens in select theaters in the U.S. and on various Video On Demand platforms on Friday, July 17.
Tweet Post Submit

Do you feel this content is inappropriate or infringes upon your rights? Click here to report it, or see our DMCA policy.
Fabrice de WelzLaurent LucasLola Duenas