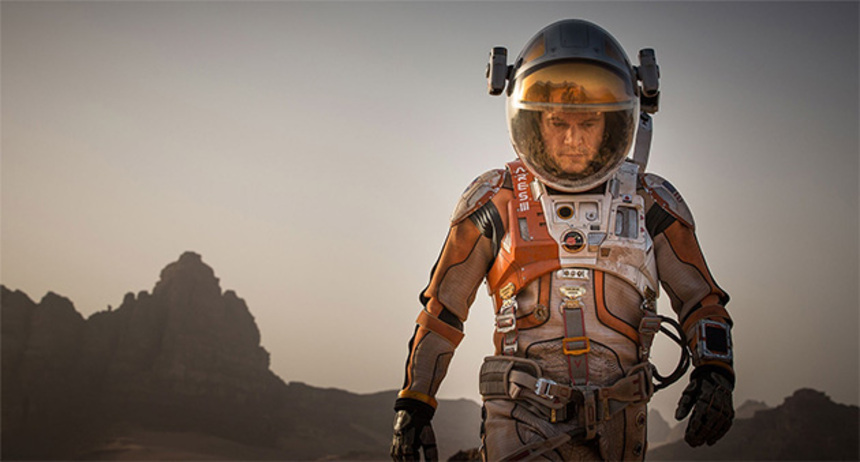 The Martian concept is a delight, stranding an astronaut millions of kilometers from home, where he has to "science the shit" out of the situation in order to find a way back. Implicit in the concept, however, is that we're probably going to see things work out - after all, would they really do a big-budget studio film where everyone dies off and people go about their day? So, how, then, does a film maintain suspense with an audience that already is predisposed to believing in the outcome?

To Ridley Scott's credit, and thanks to the script by Drew Goddard and original novel by Andy Weir, this might be an even greater feat than the heroics depicted on screen. When it's working (and it often does) we have little more on screen than a castaway Matt Damon keeping us interested. In one of his stronger performances, Damon manages to be both charismatic and believable as the space botanist who McGuyver's his way with duct tape and guile into finding a way to survive.

The rest of the principal cast, including Jessica Chastain, Michael Peña, Jeff Daniels, Chiwetel Ejiofor and Sean Bean, provides significant bursts of exposition in ways that still feel satisfying. There are a couple moments of quirkiness that didn't work as well as one could hope - a nerdy Donald Glover has a character that does that thing I hate, where a 'Eureka!' moment is hidden until it has to be explained much later in the running time, in this instance, long after the idea should have been proffered.

There's a subplot involving the Chinese that feels tacked on for film financing reasons; it's not quite as overt at the tacked-on stuff we've seen from Iron Man or Transformers, but it's a strange symptom of modern blockbuster cinema that when there's a positive representation of China, one believes it's not due to narrative considerations.

The film's diagetic soundtrack is decidedly retro, with a disco playlist providing a nice contrast from the sterile environment. It's this kind of playfulness that runs throughout, making the black humour implicit in the heightened drive to survive.

Where the film works best, though, is how it convincingly presents you with a crisis that you genuinely feel anxious about ("how the hell is he going to get out of this one?"), with well reasoned and cinematically interesting solutions. Echoing Apollo 13, there's a tremendous catharsis in seeing unconventional but convincing solutions to unconventional problems.

Worries about orbital vectors and oxygen pressures never overwhelm the story, and even if some of the interaction between the characters seems a bit forced, the playfulness is contagious.

Visually the film is a stunner: the Martian landscape rendered beautifully, the equipment design impeccable. One could find fault with the lower Martian gravity not being represented, but that person should be shushed - we're watching a film, not a documentary, and that's certainly slack that can be given. Meanwhile the low-gravity shots of astronauts zooming through the station are nice echoes of 2001, except this time there's a warmth and humanity absent from Kubrick's tale.

The film is best with its snark, a sarcasm that Damon pulls off well. There's portentousness to some of the goings on back on Earth, but most of the performers cut through these elements to give us something special to appreciate.

The Martian is a thrilling, entertaining space flick, one that doesn't require laser blasts and aliens to keep us interested. A terrific film about tenacity, it's got all the ingredients to make for a film that's both sophisticated and entertaining to a wide audience, bringing in turn a little bit of love to those brave enough to seek out new horizons for us all.

Do you feel this content is inappropriate or infringes upon your rights? Click here to report it, or see our DMCA policy.
Jessica ChastainMatt DamonRidley Scotttiff 2015Toronto 2015Toronto Film Festival