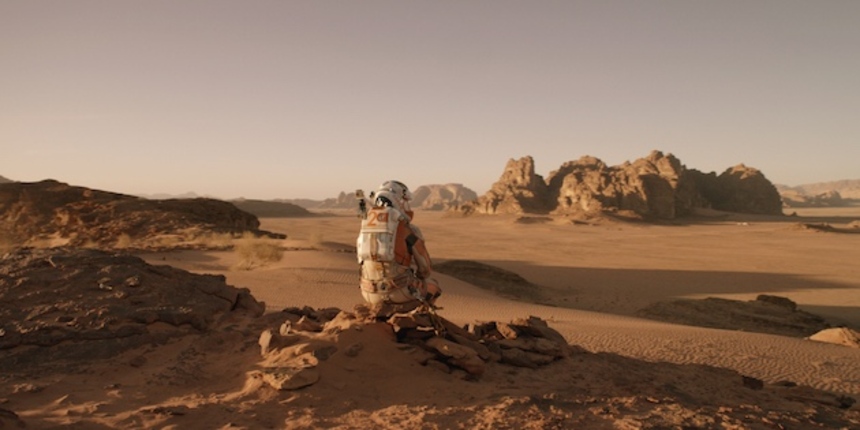 To psyche ourselves up for Ridley Scott's next film, The Martian, ScreenAnarchy contributor Kurt Halfyard and I have been putting together a limited-run podcast which works backwards through the history of Mars on film, from 2012 to 1918.

It was good level-setting. I caught The Martian at its premiere at the Toronto International Film Festival this past weekend, and was all primed to appreciate its Wadi Rum exteriors and the fact that, at about five minutes, it has the longest denouement of any Mars movie I've watched - a genre that consistently drops the mic within seconds of the climax.

Being made in 2015, The Martian also exists exactly where I'd have expected it to, on the spectrum from the romantic to the rationalist. In the history of movies about Mars, our relationship with the planet has only grown more factual; and as the data about Mars grew, our movies about the planet have grown more sterile, scientific, and unadorned with anything like metaphor or meaning beyond what you see right in front of you.

By being as much fun as it is - and believe me, The Martian is a shit-ton of fun - Ridley Scott's movie could never be accused of being sterile. But like the majority of the latter films on the subject, it's about Mars as a problem, rather than an idea. Mars is now a great MacGuffin - but it used to be something more.

The Martian nicely makes the case for human ingenuity. It's a movie about smart people behaving smartly. And as such, it might sneakily offer some insight into why collective works of space exploration might be worth more than their dollar value to those of us wondering whether we'll ever reach out into space again.

In an entirely made-up scenario (one which does, however, smartly remind us of the true story of Apollo 13), The Martian creates credible human characters who are nonetheless really good at what they do (unlike, say, Prometheus' team of mercenary space explorers, who weren't). It feels, at its best moments, like a sideways attack on the fundamental scientific and imaginative paralysis of the age in which we live.

Maybe the reason we're finding it so hard, in the 21st century, to tackle planet-scale, nation-independent problems on Earth is the lack of good examples of clever human beings doing exactly that. A Mars shot, by definition, would require the best of us to do their best work. That kind of inspiration might be worth more than we give it credit for.

In The Martian, Mars itself doesn't represent hope (or anything other than a colossally unworkable living environment, per Gravity two years ago) but the behaviour of the characters within the film suggests the value of intelligence, optimism, and perseverance nonetheless.

(With Jeff Daniels playing the director of NASA in the film, I'm reminded of Daniels' monologue as Will McAvoy in the first ten minutes of the first episode of The Newsroom, with regard to how things used to be better: "We aspired to intelligence, we didn't belittle it. It didn't make us feel inferior." Think about that the next time Donald Trump dismisses someone as a "loser.")

What's interesting as you work backwards through films we've made about traveling to Mars is: the further back in time you go (and therefore, the less scientific knowledge about the planet with which the filmmakers would have been working), the more Mars ceases to be a cold, inhospitable ball of red mud and becomes a brash, romantic fantasy world onto which stories more and more achingly mythic can be grafted.

Perhaps this was the ultimate sin of John Carter: making a film in 2012 that dared to take a 1912 view of the red planet, and was thus thoroughly, incompatibly romantic in a century where we're likely to get super excited about new close-ups of Pluto, but not because we think any princesses live there.

As I watched films like Yakov Protazanov's Aelita: Queen of Mars (silent, 1924) or the Danish 1918 film Himmelskibet (A Trip to Mars), I see romance in full bloom. In those examples, Mars doesn't serve as a stand-in for any unknown, hostile problem set, but rather as any number of mythic, enigmatic unknowns that let their filmmakers and audiences work out real-world anxieties in a safe, metaphorical play-space.

Scrutiny killed the metaphor, as I suppose scrutiny does. This is why Avatar takes place on Pandora, not Mars. I don't know if a human will stand on Mars in my lifetime, but I do know that if one does, she won't find an alien city guarded by a giant spider (The Angry Red Planet) or a society of Amazons who have sworn off men (ok, that was Venus, in Abbott and Costello Go To Mars).

And all this makes me think that for all the real-world, right-now importance of scientific rationalism to address apocalyptic problems (and count me aboard), our drive towards credibility in pop culture has also weakened our willingness to simply play in the realm of the mythic - to safely conjure realms where the unconscious can be addressed, so that the conscious can get back to work the next day.

Those stories were about more than just whether or not they were "believable," whatever that means; they were about the ways that flights of pure fancy might also be about our relationship with violence, or with class, or with god or creation or why we were doing any of it in the first place.

There's that famous Werner Herzog quote about our society dying from lack of adequate images, and I'm starting to believe him. Bringing Matt Damon home through hard science is a great thing to tell a story about. But let's not forget why we sent him out there in the first place.

Destroy All Monsters is a weekly column on Hollywood and pop culture. Matt Brown and Kurt Halfyard's podcast, Get Your Cast To Mars, is now available at RowThree.com.

Do you feel this content is inappropriate or infringes upon your rights? Click here to report it, or see our DMCA policy.
MarsRidley Scottscience fictionThe Martian