Toronto 2015 Review: In LEGEND, Double The Tom Hardy Is Double The Fun 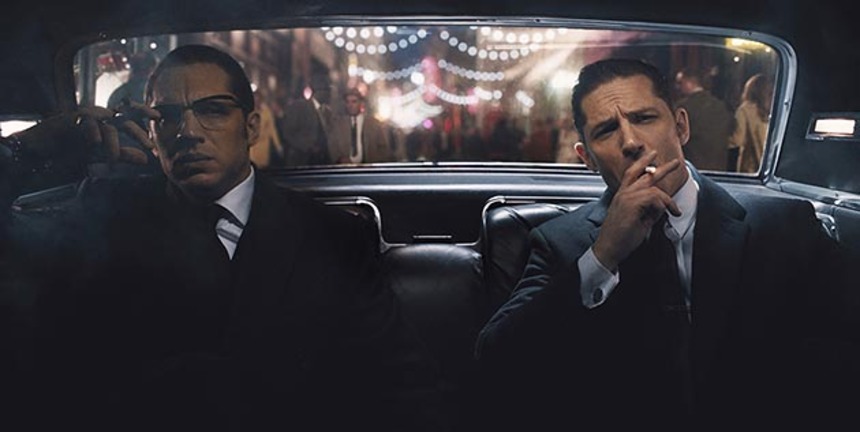 From his star-making role in Bronson to his box office busting turn in Mad Max: Fury Road, Tom Hardy has quickly established himself as one of both the most bankable and most well respected actors working today. So what could be better than Tom Hardy starring in your film? How about Tom Hardy starring twice -- in the same film?

In Brian Helgeland's Legend, that's exactly what we get. Tom Hardy plays both Ronald and Reginald Kray, infamous twin gangsters who ruled over London in the 1960s. But this isn't just the typical painting-in of the same person into a scene twice. Hardy brilliantly portrays Ron and Reg as two completely different characters with unique facial expression, gaits, and ways of speaking. It's an amazing performance and quite possibly Hardy's very best to date -- no small feat for an actor who's done what he has in the short span.

The Kray brothers' story is a familiar one to fans of the gangster genre. The brothers control night clubs and other rackets through violence and intimidation, crossing swords with rival gangs, the law, and even the Italian-American Mafia. What makes Legend slightly different than other such tales is that much of it is told through the framing device of Reg's love interest Frances, played by Emily Browning. This works to varying levels of success. Browning is fantastic so there is no problem spending a lot of time with her character. But the voiceover gets tiresome at times and a few of scenes border on overly melodramatic.

When we aren't spending time with Reg, the lover, we get plenty of time with Ron, the psychopath. His character is brutally violent and prone to fits of uncontrollable rage. In other words, he's the quintessential gangster and even though we've seen this from Hardy before (Bronson), his Ron Kray is a completely unique and particularly memorable character.

Even if the film doesn't explore any particularly fresh places, the world it does live in is fully realized and a joy to visit. The 1960s costumes and production design are fabulous and Dick Pope's cinematography doesn't disappoint either. Aside from Hardy and Browning, Chazz Palminteri, David Thewlis, and Paul Bettany show up and all turn in excellent performances.

Legend really is the full package. A well told (if rather familiar) gangster story set in a beautifully executed time and place. Throw in a fantastic performance by Tom Hardy and you've got a great flick. Throw in a second killer role for the man and now we're really talking.