Toronto 2015: Check Out The Teaser For Sono's THE WHISPERING STAR 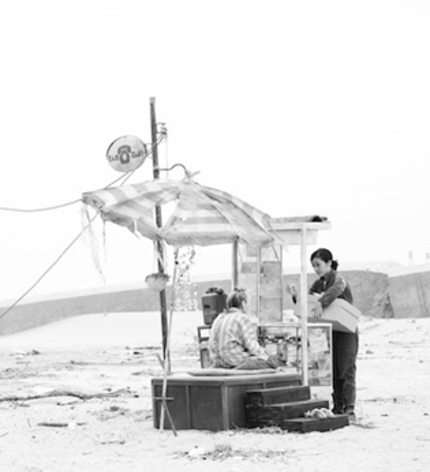 Sono Sion's latest project, the sci-fi film The Whispering Star, premiered two nights ago at the Toronto International Film Festival, and just ahead of this date, the film's first teaser has appeared online.

Much has been made of Sono's pace this year, a proposed six features completed, with four already making festival rounds, but it seems that he's not only working fast, but also in widely varying genres. Sono's usual outlandish style has been very apparent in his kaiju musical Love & Peace, his rampant misanthropy in the controversial Tag, and his others --including Shinjuku Swan and The Virgin Psychics -- all seem to be in line with Sono's sense of humor.

This latest film, The Whispering Star, appears to appeal more to the director's experimental and contemplative urges. The film stars Kagurazaka Megumi (Cold Fish) as an intergalatic deliverywoman spanning the universe to deliver packages to desolate disparate regions. Shot in black and white, the film has garnered praise for Sono's attempt at reigning in his notoriously out there sense of propriety, but as also been noted as being perhaps a bit obtuse to play well with his usual crowds.

Here's how TIFF describes the film:

A humanoid robot deliverywoman muses on the mystery of human nature as she drops off parcels around the galaxy, in this playful sci-fi fable from Festival favourite Sion Sono (Why Don't You Play in Hell?).

There's a lot more on TIFF's site, but for now, take a look at the first teaser for The Whispering Star.

Do you feel this content is inappropriate or infringes upon your rights? Click here to report it, or see our DMCA policy.
JapanSono Siontiff 2015toronto 2015Shion SonoKenji EndoYûto IkedaMegumi KagurazakaMori Kouko