Toronto 2015 Review: Sono's WHISPERING STAR Is A Hushed-Tone Oddity, Even By Sono's Standards 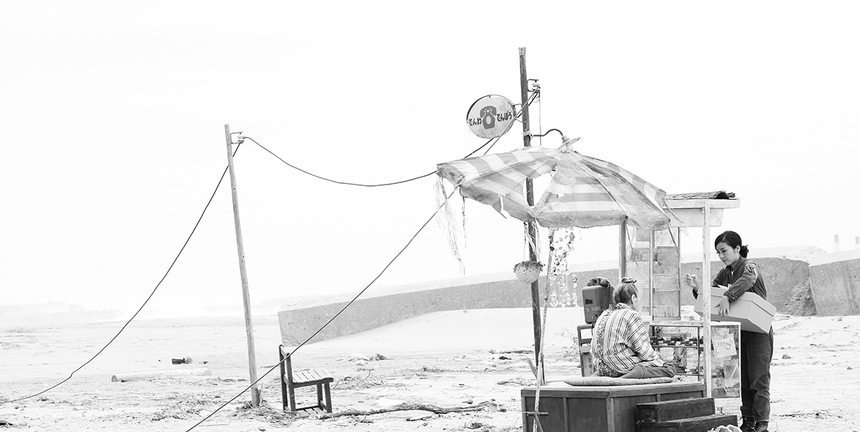 In a career positively littered with oddball entries, Sono Sion's The Whispering Star may very well prove to be the most oddball, the most niche entry in the director's lengthy canon. And, surprisingly, this is because he chooses the path of restraint rather than his usual excess.

Kagurazaka Megumi stars as Suzuki Yoko, a humanoid robot traveling the universe in a bungalow shaped space ship delivering packages to the dwindling remnants of humanity now scattered throughout the stars. Though Yoko has the chance to interact with people on each stop her primary companion comes in the form of her ship board computer, a 1940's tube radio shaped device that may or may not be going slightly daft from all the time alone in space. And with her mission now running well over a decade Yoko appears to be picking up the odd quirk or two from her delivery recipients as well.

A minimalist black and white affair, The Whispering Star is a long gestating passion project of its creator - one of his earliest scripts now dusted off and brought to fruition because the lingering devastation of the Fukushima region both provides the director the chance to shoot a post apocalyptic landscape on the cheap while also providing the perfect thematic backdrop for this wistful fable of humanity undone by its own carelessness.

One might describe The Whispering Star as deliberately paced - or simply as very, very slow - but the pacing is leavened to a great degree by a quiet sense of humor and playfully anachronistic set design which may very well be a deliberate nod to the work of Cory McAbee (The American Astronaut, Stingray Sam). Despite the very limited scale of the set Sono keeps things visually engaging with his creative camera work and gorgeous black and white cinematography.

Given that even the biggest, most commercial points of Sono's career are firmly niche items everywhere outside of Japan it is very likely that this, a willfully non-commercial film, will never be available anywhere in the world outside of festival appearances where the audience will be fueled by the existing Sono faithful. But for those who are already in the Sono club this is a worthy curio to seek out.