Fantastic Fest 2015 Review: DER BUNKER Is Smarter Than It Looks 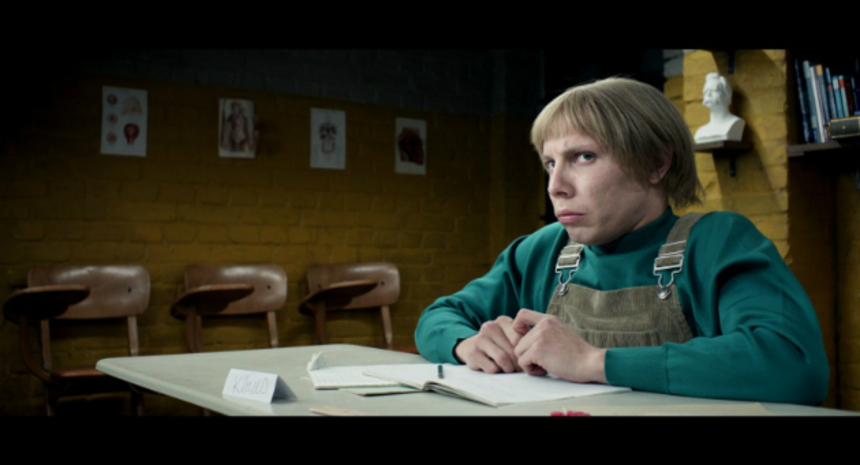 A student needs a quiet place to live while he writes a scientific paper, and so he tramps out into the deep, snowy woods to a small, isolated house and takes a look at a small, dank basement room without windows. 'It has no light!' he complains to his prospective landlord, who promptly replies, 'None can get out!'

His words prove to be prophetic, for the unnamed young man, referred to as Student (Pit Bukowski), soon finds himself an intimate acquaintance of the other residents of the house. In addition to the landlord, referred to as Father (David Scheller), and his wife, referred to as Mother (Oona von Maydell), there is Klaus (Daniel Fripan), possibly the oldest-looking 8-year-old child in human history. And there is Heinrich, who may or may not be a mysterious presence who lives in the open wound on Mother's leg and talks in a very deep voice.

The Student is soon drawn into tutoring Klaus, who has difficulty learning -- or remembering -- much of anything. His parents have faith in Klaus, however, as evidenced by the large classroom that has been set up for him, and their unquestioning confidence that, one day, he will become President of the United States. (Did I mention that this film is from Germany, and that everyone speaks German?) Ah, but there is a secret to teaching Klaus, a secret that the Student eventually learns: pain is a great motivator.

Making his feature debut, Nikias Chryssos spends the first part of the film setting up a pitch black comedy, filled it with the sort of mean-spirited, intentionally bizarre, and absurd humor that normally makes my skin crawl. Without giving too much away, though, Der Bunker is about more than a twisted, unbelievably dysfunctional family.

Indeed, the idea of education itself is examined from a bent perspective. What is ultimately more important, after all, being able to recite the names of all the world capitals in alphabetical order? Or how, exactly, to learn? When he has time to himself, the Student scribbles away at his scientific paper, making use of the walls of his room to lay out all the information that he wants to include. No details are ever given, however, about what it is he has been researching. What is it that drives the Student to such lengths? Is it his own personal obsessions, or the potential for gaining knowledge, or to prove to others what he has discovered?

Even as the Student makes progress on his paper, Mother and Father push him to do more to help Klaus make progress, somehow. Their motivations remain murky, their goals not at all apparent. Why do they act as though Klaus is 8 years of age, when he appears to be at least 20 years older? Why are they so insistent on pulling the Student away from his own work, the reason why he came there in the first place?

It's difficult to shake the notion that Der Bunker is an academic exercise, a comic and dramatic metaphor for the shape of education in the modern day. And while some developments are handled smoothly, removing the floor from beneath certain expectations, for example, others are a bit more clunky. Writer/director Chryssos has made a number of shorts, but he's not quite mastered feature-length pacing, so things lurch once in a while.

Still, Der Bunker is an impressive piece of work, reflecting a distinctive sensibility and a swarming intelligence that questions the more commonplace rhythms of narrative order.

Do you feel this content is inappropriate or infringes upon your rights? Click here to report it, or see our DMCA policy.
fantastic fest 2015GermanyNikias ChryssosPit Bukowski