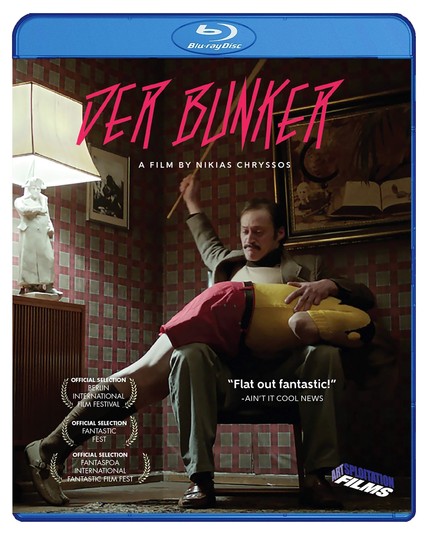 Nikias Chryssos' Der Bunker was one of the oddball breakout films of last year. This debut feature from the director follows the strange story of a student looking for a room to rent so he can work on a long term project in peace. When he answers an ad for a room that happens to be in an underground bunker in the middle of the woods, there's no way he could've predicted what he was in for. An isolated family has created their own world under the forest in which they are preparing their young son, Klaus, to become the future president of the US. It isn't exactly going to plan...

Making his feature debut, Nikias Chryssos spends the first part of the film setting up a pitch black comedy, filled it with the sort of mean-spirited, intentionally bizarre, and absurd humor that normally makes my skin crawl. Without giving too much away, though, Der Bunker is about more than a twisted, unbelievably dysfunctional family...

It's difficult to shake the notion that Der Bunker is an academic exercise, a comic and dramatic metaphor for the shape of education in the modern day. And while some developments are handled smoothly, removing the floor from beneath certain expectations, for example, others are a bit more clunky. Writer/director Chryssos has made a number of shorts, but he's not quite mastered feature-length pacing, so things lurch once in a while.

Still, Der Bunker is an impressive piece of work, reflecting a distinctive sensibility and a swarming intelligence that questions the more commonplace rhythms of narrative order.

I liked the film a fair bit more than Peter, and the issues that he points out may be present, but they never hampered my enjoyment. In terms of plot and story, Der Bunker probably holds closest to Yorgos Lanthimos' breakout hit, Dogtooth. However, Chryssos seems less interested in pointing a funhouse mirror at society than Lanthimos, and Der Bunker is significantly goofier overall. It definitely works for me.

Artsploitation Films Blu-ray release of Der Bunker is solid in all of the ways you'd expect a modern film to appear on home video. Image is crisp and clear, use of color is wonderfully replicated, and the sound is exactly as it should be with no issues that I could hear. Artsploitation includes about twenty minutes of deleted scenes - none of which belonged in the main feature, so no loss there- about fifteen minutes of outtakes, and a fairly informative commentary with the director. My only issue with the commentary is what in an effort to prevent dead space, the director seems to lapse into merely describing events on screen from time to time, but when he does go deeper into the film, it is definitely worth listening to.


Peter Martin contributed to this story.