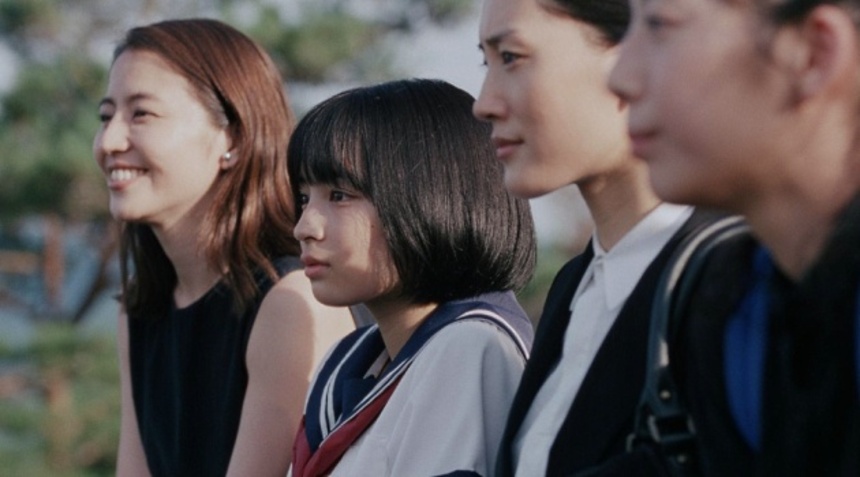 For years now, Japanese director Kore-eda Hirokazu has been making films which have an uncommonly humanist core. Often emotional, sometimes openly feel-good even, his films somehow never become the saccharine dross they would undoubtedly be in lesser hands. One of the best examples of this is his new film Our Little Sister, an adaptation (written by Kore-eda himself) of Yoshida Akimi's popular novel Umimachi Diary.

In it, three twenty-something sisters live by themselves in a large house. Their father ran away when they were young, and their mother moved away later, when the girls reached adulthood. All are employed (of sorts) and have boyfriends (of sorts), but the three form a family unit, with Sachi as the oldest looking after the others.

When their estranged father dies, the sisters pay a polite visit to his funeral, where they meet their timid 14-year-old half-sister Suzu for the first time. Sensing no warmth among Suzu's remaining relatives, Sachi decides to invite the girl to come live with them, to the surprise of friends and family alike.
As Suzu joins her half-sisters in their mansion, and everyone is delighted by her presence, a year of happy change and reflection begins for all of them.

But as they say, "dark clouds start to gather when"... well, actually they don't. "Tragedy strikes, however, when"... ehm, no, that doesn't happen either. For a drama, there is remarkably little drama here. What Kore-eda magically does is show a healing process, thereby inferring what needed to be healed in the first place. The film itself is pleasant enough, but you get the impression you wouldn't want to see a prequel. Kore-eda shows thirst, not by filming a desert with parched people, but by filming an oasis, and the happiness of people finally able to drink.

You know the backstories almost from the onset, and there are no alarms and no surprises. Bar the odd sisterly acidic remark, for the vast majority of its running time you see people being kind to each other, trying not to harm each other's feelings. What puzzle pieces there are gently slide together, instead of them closing with sudden harsh clicks. But still there is emotional impact, still you catch a glimpse of just how raw each exposed nerve was.

The film looks and sounds good, with anime legend Yoko Kanno's score not calling much attention to itself. In fact, nothing is allowed to distract from the subtle central storyline, and for its two hours, the film meanders breezily.

But breezy though it may be, Our Little Sister is the kind of breeze you want. At the Camera Japan Festival in Rotterdam it ended in second place in the audience ratings, and it wouldn't have surprised me if it had ended up being first. Friends referred to the film as "the best live-action film Studio Ghibli never made", and I've even jokingly heard the nickname "Our Sister Totoro" being used.
That's high praise, but deserved.

Our Little Sister is currently playing festivals all over the world, like Camera Japan Rotterdam last weekend. In the Netherlands, a wide release is planned for early December.