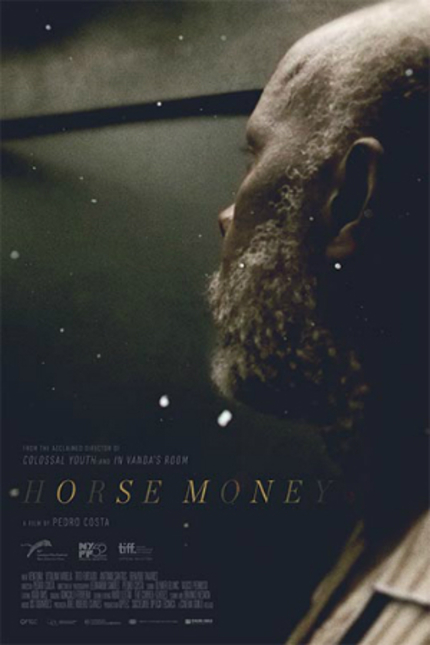 Horse Money is astonishingly beautiful in its visual poetry!

Pedro Costa, who wanted to capture the life in Lisbon's ghetto area called Fontainhas in the late 90s, made a beautiful film called Bones (Ossos). During the shoot, he saw much beauty in the place and got to know its poor, working class, immigrant inhabitants. He decided to immerse himself in their lives, abandoning his huge 35mm film equipment, elaborate lighting setups and a big crew and started documenting their lives with small video camera.
The experience bore him two more extraordinary films, In Vanda's Room and Colossal Youth, starring the inhabitants of the slum, which are remarkably immersive fictional films bordering on documentary territory. The three films became later known as The Fontainhas Trilogy.

Fontainhas has since been demolished and so is gone. But in Horse Money, Costa continues with that tradition. It is, however, much more impressionistic and dreamier than The Trilogy. It centers around Ventura, the star of his last fiction film, Colossal Youth, as he wanders around the corridors of underpopulated, haunted places. His hands shake uncontrollably because of nerve disease, he has aged more and is much more frail now. He is committed in a labyrinthine, underground mental hospital but keeps walking off and is brought back in again and again. Costa, like in Colossal Youth, lets Ventura's tales unfold in episodic storytelling.

He visits his former work place, now abandoned and forgotten -- the tall factory building is kept in its decrepitude.  He talks to ghosts from his past on the phone which stopped working long ago -- a factory foreman, secretary, even the boss.

We get the glimpse of Ventura's past. A fellow Cape Verdean, Vitalina, who finally made it to Portugal only to attend her husband's funeral, visits Ventura in the hospital. They talk about the life they left behind. He keeps insisting that her husband is alive. He thinks he is 19 and the present year is 1975. The year holds special meaning for Portuguese people. It was a revolution against the dictatorship (known as the Carnation Revolution). It also meant Portugal giving up its colonies in various parts of the world. As a Cape Verdean working class immigrant, Ventura wasn't too keen on the presence of the soldiers with guns.

Poetic, deliberately slow pace of the first half gives in to a long, surreal, mesmerizing elevator ride with Ventura and a faceless, scary soldier with a rifle. The soldier taunts the old man relentlessly. The nightmarish scene can be interpreted as Costa's therapy session for Ventura, exorcising his past demons that he desperately wants to do without.

The look of Horse Money, with long takes and painterly composition, is simply put, out of this world, from old photos of workers in mines and shanty towns that starts the film to Ventura wandering in and out of an abandoned factory/office building to labyrinthine tunnels of the hospital to a series of singing sequences. They are even more beautiful and striking than in Colossal Youth if that's at all possible. I haven't seen anything as mesmerizing in a long time. It really needs to be seen on a big screen.
Review originally published the New York Film Festival in October 2014. The film opens theatrically today at New York's Lincoln Center via Cinema Guild.

Dustin Chang is a freelance writer. His musings and opinions of the world can be found at www.dustinchang.com
Sign-In to Vote
Tweet 0 Submit

Do you feel this content is inappropriate or infringes upon your rights? Click here to report it, or see our DMCA policy.
Pedro CostaPortugalVenturaVitalina VarelaTito FurtadoBenvindo TavaresDrama