Review: BEST OF ENEMIES, The Best Of What Documentaries Can Do 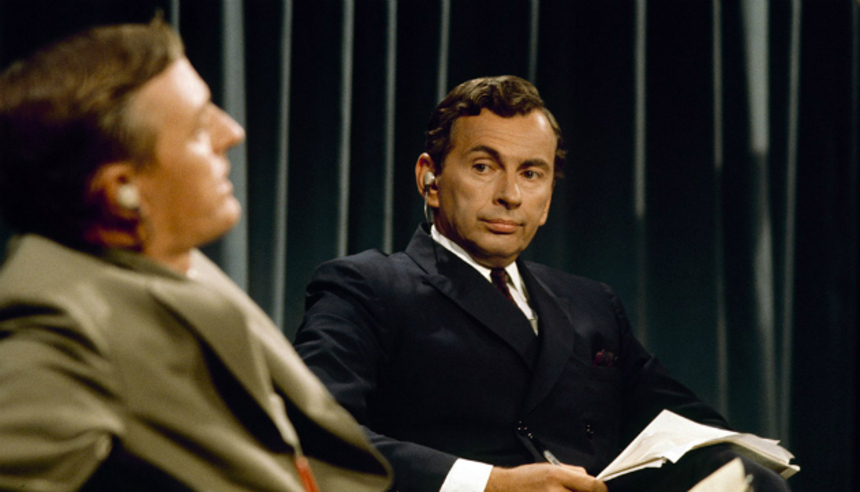 In many ways my media consumption is the child of events that date back to 1968.

As an avid consumer of "mainstream" news (CNN is my background music), I have a potentially unhealthy fascination with the way that Americans cover news. There are times where the coverage is excellent, and others where it's embarrassing, but it's all a strange and fascinating theatre, like watching an empire record its own downfall.

What "news coverage" means these days often has more to do with commentary and punditry than those elements considered more foundationally journalistic. News is entertainment, to the aghast of many, but at times it's entertainment that matters, either for propagandistic or genuinely philosophical and ideological reasons. Meta-media critiques, such as The Daily Show, are part of this ecosystem, a kind of anti-punditry that nonetheless provides vectors for debate and discussion about the news, rather than a drive to simply and dispassionately document and report.

Best of Enemies provides exceptional contextualization for how we got here, focusing on the coverage of the 1968 Presidential conventions. ABC was the underdog network, and rather than going "wall-to-wall" they provided digest coverage, 90 minutes of prime-time to talk about the leader that would follow after President Lyndon B. Johnson's refusal to run for a second term. In order to enliven the debate, they hired two exceptional commentators and intellectuals from opposite sides of the spectrum to have a brief debate every night.

The political differences between William F. Buckley, spiritual founder of the modern Conservative movement, and playwright/author/advocate Gore Vidal mirror the divide between Red State and Blue State America that has defined the last five decades. To watch these confrontations playing out decades later is, at times, stunning and startling, seeing a level of discourse that is lacking in a landscape where people shout over one another from competing on-screen boxes, yet the same general (and perhaps irreconcilable) divide remains about the very concept of what it means to be the United States. Co-directors Robert Gordon (Johnny Cash's America) and the Oscar-winning Morgan Neville (Twenty Feet From Stardom) beautifully interweave media clips, debate highlights, and contemporary talking-head interviews to produce a nuanced, complex look at the tête-à-tête. The words of Buckley and Vidal are read by Kelsey Grammer and John Lithgow, and the venom shared between the nemeses is palpable. Yet it's their inextricability that really comes across, their almost symbiotic relationship as media players who provide thesis and antithesis to each other's argumentation.

Tellingly, the biographers of each man present their respective subjects as complex, conflicted individuals, and the us-versus-them divide is articulated with many levels of greatness. It's as if the filmmakers are retroactively providing the kind of sober contextualising that this form of "debate" helped endanger on television. The participants themselves would spend considerable time (and thousands of words) revisiting those moments, and the film simply adds to that continuing conversation, bringing it beautifully into relief against the current landscape.

Best of Enemies provides the best of what documentaries can do, not only bringing to light a story that may have slipped away from general discourse, but providing critical illumination in a way that's extremely vital to the here and now. It's a fascinating tale that's exhilarating and engaging, an entirely fitting and vital showcase for the film's iconoclastic subjects.

Review originally published during the Sundance Film Festival in January 2015. The film opens in select U.S. theaters on Friday, July 31, via Magnolia Pictures.

Do you feel this content is inappropriate or infringes upon your rights? Click here to report it, or see our DMCA policy.
documentaryGore VidalMorgan NevilleRobert GordonWilliam F Buckley

More about Best of Enemies