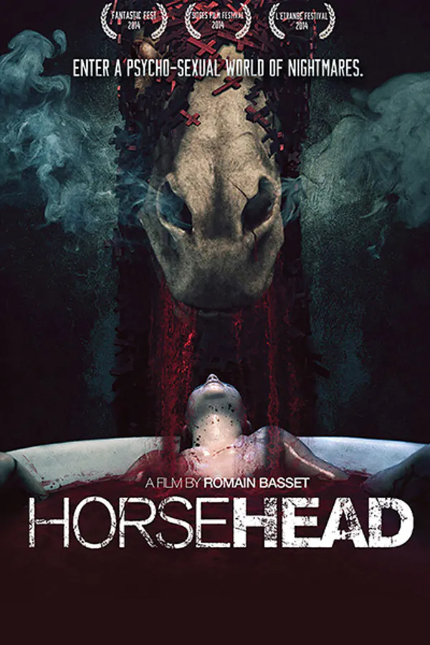 Awaken from a fever dream into a nightmare.

Do movies haunt your consciousness? I'm not thinking so much about straight horror flicks, per se, but movies that enter your mind and continue to percolate long after you've seen them.

In particular, I've been thinking about Horsehead (aka Fievre) lately, the feature debut by director Romain Basset. I missed seeing it at Fantastic Fest in September 2014, but watched it at the Morbido Fest in Puebla, Mexico in November 2014, where it -- along with a few other titles -- lodged itself into my memory.

On first impression, Horsehead looks freakin' fantastic, an explosion of colors and emotions, like paint splashed on the big screen, only somehow modulated with great precision. The opening sequence features someone wearing a large horsehead mask, and it's nightmarish and weird in that random fashion that's familiar to anyone awakening from a fever dream.

Jessica (Lilly Fleur-Pointeaux) is a beguiling young woman who heads home after the death of her maternal grandmother. Her reunion with her mother (the great Catriona MacColl) is testy, and it's clear they haven't gotten along for a very long time.

When Jessica heads upstairs in the extremely large house -- a small if somewhat wilted mansion, really, on expansive grounds -- she discovers that her dead granny is lying in state, awaiting the wake, in the room next to her sleeping chamber. And then Jessica experiences a very strange dream that night, and wakes up quite ill.

From there, things get more and more unsettling as Jessica spends more time dreaming than awake and those dreams become ever more disturbing. Yet in those dreams lies the possibility of something entirely positive, something that may save Jessica from the nightmares that have plagued her since childhood.

I've never been one to analyze my own dreams; as much as I enjoy watching dark fantasy and horror movies, in certain areas of life I remain resolutely pragmatic and lack the imagination or inclination to tie all these random things together. But that doesn't mean they slide off me like water off a duck's bill; I still wake up on occasion from an especially charged dream and wonder if there's any meaning to be found.

That was my reaction to Horsehead. My instinct was to deal with it as a movie, primarily, a very good one that was entirely compelling, somehow both enchanting and chilling, filled with strong, provocative imagery and driven by a powerful narrative force and very good performances.

Theoretically, I could leave Horsehead behind as a positive viewing experience. Instead, it continues to haunt me, for reasons I haven't quite figured out yet.

Do you feel this content is inappropriate or infringes upon your rights? Click here to report it, or see our DMCA policy.
Catriona MacCollFranceLilly Fleur-PointeauxRomain BissetShudder