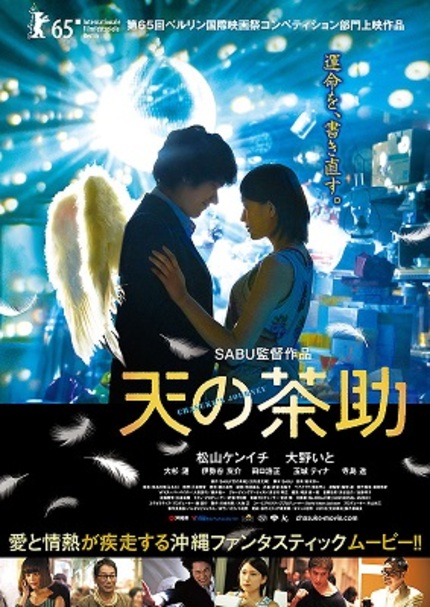 The often-emulated mix of rapid-fire, kinetic energy, sharp, dark humor, characters tossed about by the vagaries of fate, and a heart full of homegrown truths has made Sabu one of Japan's most revered modern filmmakers. The director brought Chasuke's Journey, his newest film about a fallen angel to the New York Asian Film Festival.  He spoke to me briefly about his thoughts on an afterlife inhabited by bad screenwriters, his advice to young filmmakers, and his appearance in Martin Scorsese's upcoming film, Silence.

The Lady Miz Diva: CHASUKE'S JOURNEY isn't only your newest directed film, it is also based on your own first novel. What was the inspiration behind it?

Sabu:  The idea came about because in my life, I encounter a series of coincidences.  For example, meeting someone, or meeting different people, but I always feel as if it's not really coincidence, but it's being led by someone.  Take, for instance, the stoplights, whether or not the light turns red or not; that in itself decides my fate, but I don't know if it's just coincidence, or from being led by someone.  In Japan, we call them shugorei, or in English, guardian angels, but I feel as if someone is watching over me and leading me.  And if I even desire something, whether or not it happens, I'm not sure whether or not it's entirely up to me.

LMD:  What was the significance of the festivals both when Chasuke is born on the earth and when it appears he's dying?

S:  In Japan, the ceremonies or rites are often considered to be a way to correspond with a spiritual being, or higher being, or gods, so it was important that whenever something happens to Chasuke, there's also a ceremony.  It was a way to connect with a higher being.

LMD:  You worked with Matsuyama Ken'ichi before in USAGI DROP.  What made you feel he was right to play the fallen angel, Chasuke?

S:  When I worked with him for Usagi Drop, there's a scene where there was a funeral going on and he's dressed in a black suit, and he has naturally curly hair, and we talked about how he kind of resembles a yakuza.  There's a Japanese term "panchi pāma," or punch perm, which means the curly hair that most delinquents and yakuza sport, so I thought he'd look great as a yakuza.  But at the same time, he is a very pure person, so there's two sides to him, and I really like that and I wanted that for this film.

LMD:  I don't know if it's the same in Japan, but in the US, it's kind of tough to get people to watch anything having to do with faith or the idea of a higher power controlling our fate without others sneering at it.  Did you have any thoughts about that with regard to your presentation of the subject?

S:  I think in Japan, it depends on the film.  If it's too didactic or lecturing, of course people will be turned off by it.

LMD:  In an interview for Kani Kosen, you said regarding your departure from the original novel, "I wanted to make an entertaining, and also an inspiring film." I actually felt very inspired and uplifted at many parts of CHASUKE'S JOURNEY.  Does the need to inspire drive you more as time goes on?

S:  So, I'm a grown man, so I have to be, to a certain degree, serious; but I do value the importance of entertainment and I want to make sure that the audience has fun.  But I think it's very important not to have a very lecturing tone to delineate subjects like this, especially.  So I think it's about balance between the two.

LMD:  The scene of Chasuke running through the market reminded me of DANGAN RUNNER and several of your energetic films.  What is the idea behind the majority of the action in CHASUKE'S JOURNEY being shot in the market area?  Did you tell Matsuyama to train to do a lot of running?

S:  With regard to shopping arcades, it's a frequent feature a lot of my work.  It's a space that I love.  Especially this shopping arcade in Okinawa was very specific and unique, because it has all these great narrow alleyways and old buildings, so it was great to capture that.

LMD:  Did you consider having Chasuke use his powers for his own gain rather than do good deeds for others to correct the bad writing of the heavenly hack screenwriters?

LMD:  As I mentioned, you've worked with Matsuyama before, as well as Osugi Ren, who is also in this movie.  You seem to have a rotating cast of repeat actors {Terajima Susumu, Tsutsumi Shin'ichi}.  Is there a comfort level in collaborating with actors you've worked with before?

S:  Definitely, there is a sense of trust and kinship between the actors that I frequently work with.  Of course I want to work with new actors, as well, but there aren't a lot of people that have occurred to me.

LMD:  In the past, you've talked about making films without benefit of film school.  Was it more difficult for you to make films and be seen by film companies because of that?  How did you actually learn all the things one must know about filmmaking?

S:  So, the truth is, I've made so many films, but I still don't consider myself a filmmaker.  I didn't have a particular desire to be a filmmaker in the beginning, so I still lack the confidence, to tell you the truth.

I think it really helped that I worked for over 10 years as an actor, so I knew how the crew was supposed to function, and I understood how the set operates, and I had a sense of that.  I also like to create stories, and that helped, as well.  I was also in a band and so was interested in music, so I knew how to incorporate score, for instance.  I also studied at the Osaka fashion school, so I had a sense of how art, fashion and wardrobe were supposed to work, as well.  And it just all comes down to watching a lot of movies: There a lot of movies that became a model for me, so that's how I learned.

LMD:  Were any of those movies Martin Scorsese movies?

LMD:  Now you know where this is going: I must ask about your experience making SILENCE with Director Scorsese? American productions about Asian topics or history are often criticised for a lack of understanding, or only presenting the western side.  Please tell us about your character in the film and how you saw this project?

S:  With regard to Scorsese, he was very particular about understanding the history, so I don't think you need to be concerned about his lack of understanding.  I think he's got it.  And my role, he's a very boisterous samurai who tells the priest, Andrew Garfield, that we don't need Christianity in this country.  So I play a very stern samurai.

LMD:  Even though you don't consider yourself a filmmaker, would you please give some advice to our readers who look up to your style of filmmaking?

Do you feel this content is inappropriate or infringes upon your rights? Click here to report it, or see our DMCA policy.
Japanese CinemaMatsuyama Ken'ichiNYAFF 2015Sabu