Fantasia 2015 Review: ANT-MAN, A Cog In The Mighty Marvel Machine 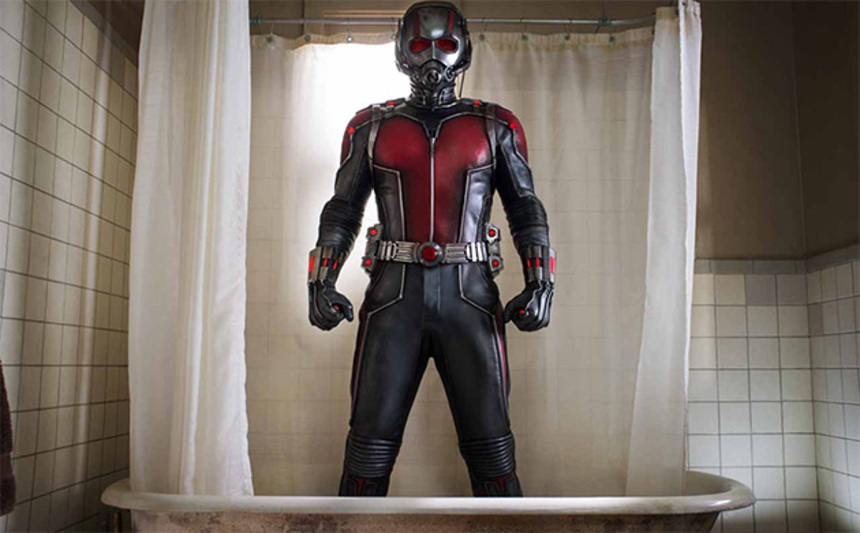 It's always a bit of a danger judging a film by why it's not, or by what it could have been, versus what it actually is. This factor is made even more manifest when a beloved, fan-fav filmmaker leaves a project due to "creative differences". We're likely to never know exactly what Edgar Wright's own vision for Ant-Man would be like, but I'm betting it'd be a whole lot better than what we got from the theatrical release.

That's not to disparage the people that brought this version to the big screen. In its current guise the film has a lot going for it - a charismatic lead, some fun fight sequences, a bunch of zany side characters, and an icon in the form of Michael Douglas adding a shmear of sophistication to it all.

Paul Rudd inhabits the role with a terrific sensibility, and his contributions to the script (along with the fine Adam McKay) results in a jokey, pleasing flick. As yet another comic book origin story it's pretty decent, and when the film is at its best it's never taking itself too seriously.

Unfortunately, there are also great tracts that are pretty darned clunky. This is definitely a turn-off-your-brain storyline that's moving quickly enough that you're not supposed to pay attention to the fact that it's genuinely incoherent. Motivations for characters in comic book films are always painted with a wide brush, but the storyline give little shrift as to why a scientist would spend so much effort on this one burglar, or how the bad guy figured out the plans pretty darned quickly. We're supposed to just accept this stuff, and that's fine, but in this case it really does feel like we're seeing an echo of a different, perhaps darker story, one where perhaps those that are still good guys might not have been so kind, and the bad guys not quick as two dimensional as appeared.

The performances are all pretty great, except for poor Evangeline Lilly who is not only given little to work with, she doesn't do particularly well with what she's given. On the other hand, Michael Peña chews his scenes like a champ, providing the closest echo to Wright's other films with flashbacks and voice-overs that creatively provide both exposition and backstory.

It's these moments that provide pangs of regret, the what-could-have-been-ness of the whole piece. It's the other moments that feel tacked on and redundant, from the fight with that Falcon dude to the inevitable post-credit teases, that make it feel less of a unique work and more a cog in the mighty MCU machine.

Ant-Man 's closest connection, stylistically rather than narratively, is Guardians of the Galaxy, a film where another Indie director was allowed to run wild because his playground was very far removed from most of the other terrestrial plotting. As it works there's a feeling to Ant-Man that we're simply going through the motions in order to introduce this character and have him play a part in something forthcoming.

Comic fans are of course not only warm to this kind of storytelling, they almost expect it. But as a person who only comes to these characters through their works on the big screen it's simply not enough to have a couple whiz-bang scenes involving a guy riding some mind-controlled bugs. When you find yourself completely accepting notions of trans-atomic voyages and suits that help shrink a man while maintaining his density, but find yourself wandering during scenes where they have perfect walkie-talkie conversations without any break-up in a congested broadcast spectrum like San Francisco, then perhaps one has to admit that belief hasn't quite been fully suspended.

Director Peyton Reed has had his share of decent credits, and I metatextualy adore that the man that helmed the Kirk Cameron masterpiece The Computer Wore Tennis Shoes is now helming a gazillion dollar franchise film.

I like Rudd in this role, I like the concept of the burglar who can turn tiny, and I even like bits of the storyline where they have fun with both the style and tone of the piece, and for reasons of punning alone I should allow that parts of this film can bug me without needing to call it a disaster. Still, we're back to where we're started, wondering what could have been if Wright wasn't wronged, if there was a little less Marvel-izing of the storyline for the greater good and this relatively minor character was allowed to fly under his own banner.

Ant-Man is, well, OK, and maybe that's enough. I wanted more, and those moments where it looked like I was going to get it, only to have things not quite come to fruition, makes the film as frustrating as it is enjoyable.