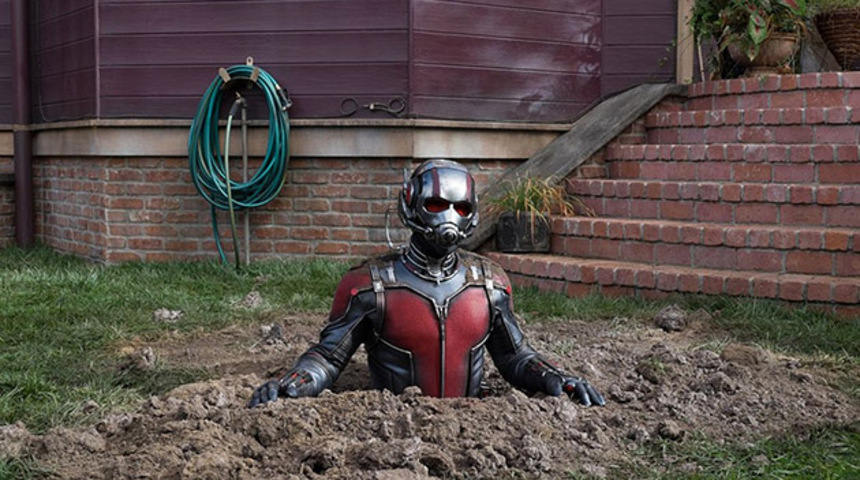 Each year offers its selective crop of new Marvel properties, and for the last couple I've been keeping a mental tally of how the MCU seems to be faring, creatively.

We're still owed a third season of Agents of S.H.I.E.L.D. and a run of AKA Jessica Jones before we can really tally up 2015, but with Ant-Man on screens this week and Phase Two officially over, here's a look at the health of Marvel Nation:

Business Model - Love it or hate it, there's no longer any denying that Marvel Studios has basically written the future of Hollywood franchising. They've had seven years out front with their shared cinematic universe, and now everyone is racing to catch up: Star Wars and the Distinguished Competition over the course of the next year, and properties from Transformers to Ghostbusters to LEGO trying to reverse-engineer the same multi-thread, interwoven ideal.

It remains an astonishingly secure construct. Even if it goes down as a lesser piece of the pie, Ant-Man's connections to Civil War make it a fun teaser for the next phase anyway, and will bolster its audience base and financial value. The model might grow tired over time, but it probably won't before Infinity War at the earliest. In the meantime, these films seem unsinkable.

Representation - I think at this point the only word to answer this one would be "abysmal." I might have been somewhat more cautiously optimistic last week, but then I saw Ant-Man's film-long condescending pat on the head to female fans who want a female superhero - "It's about time!" - and my mood darkened.

Paired against a Suicide Squad trailer that overflows with non-male and non-white characters, or even Marvel's own publishing division's great strides in the same category, and it becomes clear that the MCU is lagging behind on representing its whole audience in its superhero universe. Captain Marvel and Black Panther are still an astonishing three years away. Marvel risks looking like a dinosaur by then.

Creative Direction - Questionable. A glance back at the MCU canon demonstrates handily that the great Marvel movies (Thor, both Captain Americas, the first Avengers, and of course Guardians of the Galaxy) were directed. Usefully, they also tend to be the movies that over-perform on expectations at the box office.

The Marvel movies on the weaker side of things (Thor 2, Ant-Man, The Incredible Hulk) are the ones that were merely delivered, assembled by journeymen who gave Kevin Feige what he wanted while failing to demonstrate creative leadership with respect to what their particular corner of the MCU could actually be doing. Again usefully, these tend to be the movies that under-perform on projections; Ant-Man is the latest one.

Is Marvel learning this lesson? Unclear. If someone at Disney isn't having a hard look at the difference between Guardians' breakaway success a year ago and Ant-Man's lackluster return this week, they're missing a key measurable.

Iron Man - It's amazing how on-model the movie remains, even 7 years later. It's confident and classy, so much so that it almost escapes the problems of its third act, which features such memorable sequences as "Pepper Steals A USB Stick From Jeff Bridges." Favreau shot a great picture, one that remains delightfully airy under the burden of what it was also responsible for kicking off. SCORE: B+

The Incredible Hulk - A movie with the odds stacked so sorely against it that I almost come away respecting it just for getting to the end credits in one piece. At the end of the day, Hulk was a dumb idea for a Marvel movie, except as a placeholder: anyone going to see The Avengers a few years later already knew who the character was (or didn't care); and the perverse hero logic of the Hulk as a character doesn't allow for anything resembling a crowd-pleasing mainstream hit. SCORE: C

Iron Man 2 - The "heavy lifting" movie of Phase One, IM2 did a good job of laying runway for the wider MCU and a less-than-good job of being The Dark Knight to Iron Man's Batman Begins. Continuity snarls aside, the real red flag of Iron Man 2 comes in its demonstration of what would become a major recurring problem in the MCU: this creative team really doesn't know what to do with a villain. Both Sam Rockwell and Mickey Rourke are largely wasted in under-conceived roles, a legacy that would go on to infect Thor 2, Iron Man 3 and Ant-Man as well. SCORE: C

Thor - The real bench-strength of the original MCU premise showed itself, to a lot of peoples' surprise, right here: I've called Thor the lynchpin to Phase One and Phase Two. Thor was the gambit that opened up the science fiction side of the Marvel Cinematic Universe by way of a disco god with a big hammer and an appalling knack for getting hit by cars; it also cast the principal villain of The Avengers with an unknown British stage actor. If Thor had gone wrong, a lot of subsequent property would have gone into the ground with it. Kenneth Branagh's nimble direction saves the day - and, by extension, the MCU - delivering a weird, defiantly whimsical home run. SCORE: A

Captain America: The First Avenger - 2011's other big gamble was the somewhat-known Marvel heavy-hitter with the American flag on his shirt. Again, smart direction saves the day: Joe Johnston puts together a classy, pulpy 1940s serial adventure featuring a surprisingly deft performance from a touchingly reluctant Chris Evans, even if the script structure never seems to spend the right amount of time in the right place. SCORE: B

The Avengers - A kind of weird miracle, Avengers is lunkheaded and awkward in its first half, and then ties together so convincingly in its second that all the lunkheaded awkwardness seems like the work of a master chess player. Which, Whedon being Whedon, it might honestly have been. A film of great scenes - which few MCU properties can claim to be - and great set pieces, The Avengers was a decisive capper for the Phase One project (cheeky enough to include talk of "Phase Two" as part of its own plotting), and great shawarma. SCORE: A+

Iron Man 3 - Heartily chancy and weirdly inert, Iron Man 3 gains major props for being one of the only MCU entries thus far with genuine subtext and intellectual curiousity, and loses points for being a bit blocky and underwhelming as a result. SCORE: B-

Thor: The Dark World - Any defects in Iron Man 3 can be casually waved aside with one iron-clad assertion: Thor 2 was worse. 2013, generally, showed Marvel's post-Avengers malaise bigtime, as the company struggled to (re-)find its footing. Anyone who thought Marvel had it down to a science by this point was in for a shock. SCORE: D

Marvel's Agents of S.H.I.E.L.D., Season 1 - It might have improved as it went, but Agents of S.H.I.E.L.D. is a bad idea that started worse, and only improved marginally as Captain America: The Winter Soldier's kinetic energy overtook the show's weaker elements. Everyone is trying their guts out on this show, which makes it all the more disappointing to have to call it the least interesting corner of the Marvel Universe. But it is. SCORE: F

Captain America: The Winter Soldier - If 2013 was the MCU's low point, Marvel's rebound was swift and decisive. Cap 2 is not remotely like Cap 1, nor anything else in the franchise thus far; it's dark, brisk, and angry while still containing such soft pleasantries as Steve comprehensively failing to impress Natasha with his kissing game. Like the other MCU sequels, its "villain" - if you consider that villain to be the Winter Soldier - is underdeveloped; but its villain - i.e. the nest of HYDRA living inside S.H.I.E.L.D. - turned out to be a world-bending game-changer. SCORE: A+

Guardians of the Galaxy - Last summer at the movies was such a bummer that a portion of the goodwill towards Guardians can simply be attributed to our collective relief at having finally found a movie that wasn't about the imminent end of all happiness as we know it. The rest of the goodwill, though, comes from just how pitch-perfect Guardians of the Galaxy turned out to be. Top marks to James Gunn for picking his spot in the seats and swinging straight for it; he's now the standing proof that author-driven filmmaking can still exist within this colossal, interconnected universe. (Sorry, Edgar Wright.) SCORE: A

Marvel's Agents of S.H.I.E.L.D., Season 2 - There are those who will go to the mat for the show, saying that it's improved a lot since Season 1. This is true - but still doesn't make it particularly good. There are interesting things happening on S.H.I.E.L.D. this year as it starts to set up the Inhumans movie (or, better, a Ms. Marvel TV show?), but the episodes themselves remain dull, mechanical, and uninspired. SCORE: D-

Agent Carter - Marvel's second television project was such a dramatic improvement over S.H.I.E.L.D. that I tended to over-praise it at first. Agent Carter ended up being a fun, if slim, brace of period-isms and classy action with a decidedly enhanced visual style over the pictorially-lifeless S.H.I.E.L.D. Hayley Atwell was better than the show she was in, but the series' widely-spaced high points - in particular, a visit to the Black Widow training school for young evil-doers in Soviet Russia - were pretty high. SCORE: B-

Marvel's Daredevil - All of which was blown wholly out of the water a couple of months later with Marvel's first Netflix series, the 13-episode Daredevil, which some have called - perhaps rightly - the best work Marvel Studios has ever done. Daredevil is intensely visual, dramatically committed, and rewardingly complex in its treatment. This broadening of the tonal palette in the MCU augurs well for the future: not just the other Netflix shows, but any other property from the comics canon that aims to be its own, special thing. SCORE: A+

Avengers: Age of Ultron - Weird, sad, and disappointing almost in spite of itself, Ultron is a movie that would have blown any of our minds eight years ago and now seems like an underwhelming soft lob in the blockbuster marketplace of 2015 - so much so that a shitty third sequel to a decades-old franchise even stole its box office thunder. (Which, at $455M domestic, was still pretty effing thunderous.) One thing's for sure, though, by the end of the end credits: the party's over. The best heroes have gone home and the B-team is in play. Interestingly, AOU seems to posit a Phase Three where Avengers don't flow into and out of the stand-alone movies quite so easily - a blessing, perhaps, given that there are now as many stand-alones coming in the next four years as we've had in the last eight. SCORE: B

Ant-Man - A couple of points higher than an outright disaster, Ant-Man wins credit for holding itself together under the tectonic creative shift from Wright to Reid, and has some nifty content interspersed into its shlubby drama. Marvel's secret weapon, the interconnectivity of its universe, is on fine display here, and if you're not hooting throughout the Avengers compound sequence, you're a colder-hearted comic book fan than I. Paul Rudd's Scott Lang is certainly someone I'll be happy to see back again in future team up movies. But yeah: a whole movie to assert that maybe it's time for there to be girl superheroes is sort of the ultimate dick move. And dick movie. SCORE: C

OVERALL: B-, which seems about fair, given the scale of the field. Can the score trend up in Phase 3? We'll see.

Destroy All Monsters is a weekly column on Hollywood and pop culture. Matt Brown and Alia Miller are kicking off the second season of their superhero podcast, Super Zero, this Thursday on the Modern Superior network.